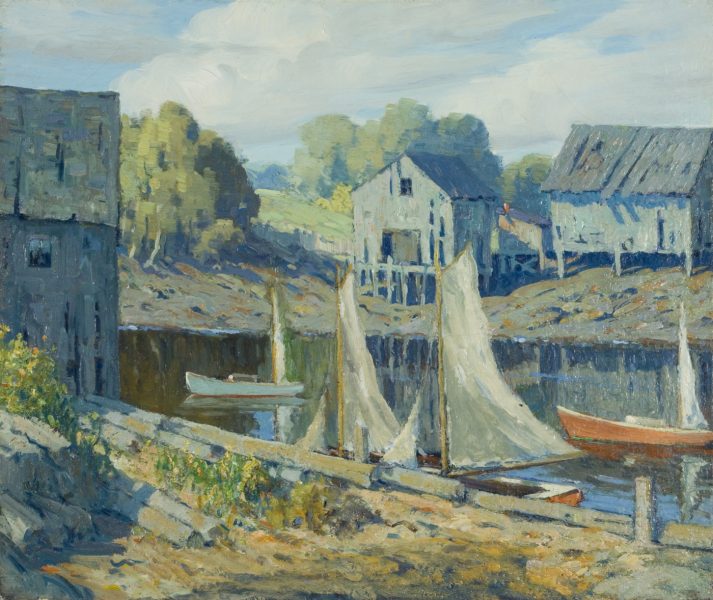 The Hudson River Museum, by bequest from the above

After working as a designer for a carpet mill, George J. Stengel brought a beautifully balanced sense for color and composition to his impressionistic paintings of semi-rural America.

George J. Stengel was an American impressionist landscape painter who was a founding member of the Yonkers School of Design and Yonkers Art Association. He is best known today for his impressionist scenes

After working as a designer for a carpet mill, George J. Stengel brought a beautifully balanced sense for color and composition to his impressionistic paintings of semi-rural America.

George J. Stengel was an American impressionist landscape painter who was a founding member of the Yonkers School of Design and Yonkers Art Association. He is best known today for his impressionist scenes of Yonkers and New Hope, which often depict tranquil images of canals and rivers.

Stengel was born in Newark, New Jersey, on September 26, 1866. When he was three years old he moved with his family to Yonkers, New York. Stengel’s elementary school teachers first recognized and encouraged his talent for drawing and painting. At age fourteen he left school and began working for the Alexander Smith and Sons Carpet Company in Yonkers.

While working at Alexander Smith and Sons Carpet Company, Stengel began taking life drawing classes in the evening at the Art Students League in New York City. In 1886 the Smith Carpet Company, having noticed Stengel’s talent for art, sponsored him to train at the Académie Julian in Paris for two years. While at the academy Stengel studied under academic painters Gustave Boulanger and Jules-Joseph Lefebvre.

Upon his return to America in 1888 Stengel was promoted to the position of Designer at Smith Carpet Company, and later became their Chief Carpet Designer in 1913. Stengel’s painted studies for Persian-style and French Aubusson-style carpets demonstrate his skill at combining vibrant colors into harmonious arrangements. Stengel worked for the carpet mill until his retirement at age fifty-five.

By the 1910s Stengel was an active member of the arts scene in Yonkers. He founded and was president of the Yonkers School of Design, which was supported by the Smith Carpet Company. He was also a co-founder and vice-president of the Yonkers Art Association. This association was influential in petitioning Yonkers’ city council to turn the Glenview Mansion, overlooking the Palisades, into the Hudson River Museum in 1924. While neither the Yonkers School of Design nor the Yonkers Art Association still exists, Stengel’s Yonkers legacy lives on in the Hudson River Museum which holds many of his paintings, carpet designs, and archival materials in its collection.

Upon his retirement in 1921, Stengel moved with his wife to Ridgefield, Connecticut. Working as a fulltime painter at this time, he increased his exhibition commitments showing often at the Salmagundi Club and also with the Yonkers Art Association and Guild of American Painters. In 1923 Stengel’s entry to the National Academy of Design was reproduced in the periodical The Art News where it was noted for its “remarkable” use of color.1

Stengel spent time painting in Pennsylvania near the town of New Hope while living in Connecticut. He was probably attracted to the region by its artists’ colony, which was founded by impressionist painters Edward Willis Redfield and William Langson Lathrop. Stengel’s style developed during this period and his subject matter expanded to include colorful works of the Delaware river and canal, and also scenes of rural industry and leisure activities. Stengel also spent time painting on Monhegan Island during the 1920s, Maine, and in the summer of 1928, took a trip to Carmel, California. These paintings depicting eastern and western coastlines were exhibited in a solo show at Babcock Galleries in 1929.

Stengel died on November 31, 1937 following several years of ill health. A retrospective memorial exhibition was held at the Hudson River Museum in 1942. His artistic achievements were relatively unrecognized over the last sixty-five years until, in 2008, Thomas C. Folk published a monograph on the artist to accompany a touring exhibition of his work. This volume offers a sound foundation for the rediscovery of Stengel’s oeuvre by contemporary audiences.

1860 George J. Stengel is born in Newark, New Jersey, on September 26
1863 Moves with his family to Yonkers, New York
1874 Leaves school and begins working for the Alexander Smith and Sons Carpet Company as a laborer
c.1880s Takes life drawing classes at the Art Students League
1886 Studies for two years in Paris at the Académie Julian; his teachers include Gustave Boulanger and Jules-Joseph Lefebvre
1888 Returns to America and is promoted to the position of Designer at the Smith Carpet Company
1891 Exhibits Summer Morning (whereabouts unknown) at the National Academy of Design
1897 Exhibits Winter Day (whereabouts unknown) at the National Academy of Design
1900 Returns briefly to study at the Art Students League under George Bridgeman
1913 Promoted to Chief Carpet Designer at the Smith Carpet Company
1914 Visits Carmel, California
1916 Co-founds the Yonkers Art Association
1921 Retires and moves to Ridgefield, Connecticut
c.1927 Spends time painting on Monhegan Island, Maine
1928 Spends the summer painting in Carmel, California
Exhibits his Monhegan and Carmel paintings in his Connecticut studio
1929 Has solo exhibition of mostly Monhegan and Carmel paintings at Babcock Galleries, New York City
1932 Becomes Vice President of the Yonkers Art Association
1933 Production decreases as Stengel becomes increasingly ill
c.1935 Donates three paintings to the Hudson River Museum
1937 Dies on November 31
1942 The Yonkers Art Association presents a memorial retrospective of Stengel’s work at the Hudson River Museum