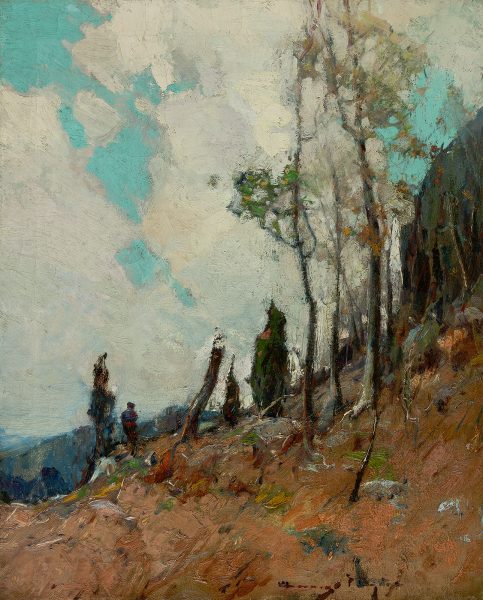 On the Mountain Side

By embracing tonalism and Impressionism, Chauncey Foster Ryder devised his characteristic style distinguished by a bold application of nuanced colors in poetic landscapes. The artist was born in Danbury, Connecticut in 1868 and lived in New Haven during his youth. He moved to Chicago in his twenties and enrolled at The

By embracing tonalism and Impressionism, Chauncey Foster Ryder devised his characteristic style distinguished by a bold application of nuanced colors in poetic landscapes. The artist was born in Danbury, Connecticut in 1868 and lived in New Haven during his youth. He moved to Chicago in his twenties and enrolled at The Art Institute of Chicago around 1891. Like many of his peers, Ryder traveled to Paris at the turn of the century to engage in the thriving art scene. He studied with J. P. Laurens at the Académie Julian in 1901 and also painted under the guidance of Raphael Collin. During his time abroad, Ryder exhibited annually at the Paris Salons. While his early work was inspired by James Abbott McNeill Whistler, around 1903 Ryder’s paintings began to transform and incorporate broad brush strokes and expressive impasto, a stylistic path he continued to develop throughout his career.[1]

Ryder maintained a studio in Paris until 1910, yet he returned to the United States around 1907 and began exhibiting with Macbeth Gallery in New York City. Although he lived in New York, the artist spent much of his time in Wilton, New Hampshire.[2] In 1915, he became an associate member of the National Academy of Design and was promoted to academician five years later. From 1920 to 1927, Ryder and his wife spent their summers on Monhegan Island in Maine, and he also worked and exhibited in Old Lyme, Connecticut.

Art historians have noted Ryder’s mature style for the unique energy and rhythm that imbue his stylized depictions of nature.[3] In his seminal book on American tonalism, David A. Cleveland writes about the genre’s trajectory into the 1920s: “it was transformed by artists like Chauncey Ryder… into renderings of nature with bold impasto and strong tactile values, demonstrating that a poetic use of tone and a powerful handling of paint could produce works of both abstract complexity and stirring emotion.”[4] Contemporary critics also commented on the poetic and romantic quality of Ryder’s landscapes.[5]

Over the course of his career, Ryder developed his diverse skills through classes at the New York Watercolor Club, National Arts Club, Society of American Etchers, California Printmakers, Chicago Society of Etchers, and the American Federation of the Arts. While he was best known for oil paintings, Ryder also worked with watercolors. His paintings won many awards and he exhibited widely throughout the United States and in London and Paris. Ryder’s work now resides in the collections of the Brooklyn Museum, Cleveland Museum of Art, The Metropolitan Museum of art, National Gallery of Art, Pennsylvania Academy of the Fine Arts, and Smithsonian American Art Museum, among others.

1868 Born in Danbury, Connecticut
ca. 1891 Studies at The Art Institute of Chicago, Illinois
1890s Teaches at Smiths Art Academy in Chicago, Illinois
1901 Moves to Paris for ten years; Studies at the Académie Julian with J.P. Laurens and with Raphael Collin
ca. 1907 Moves back to the United States
1915 Appointed an associate member of the National Academy of Design
1920 Promoted to academician at the National Academy of Design
1920–27 Ryder and his wife spend summers on Monhegan Island, Maine; Paints at Old Lyme, Connecticut
1949 Dies in Wilton, New Hampshire