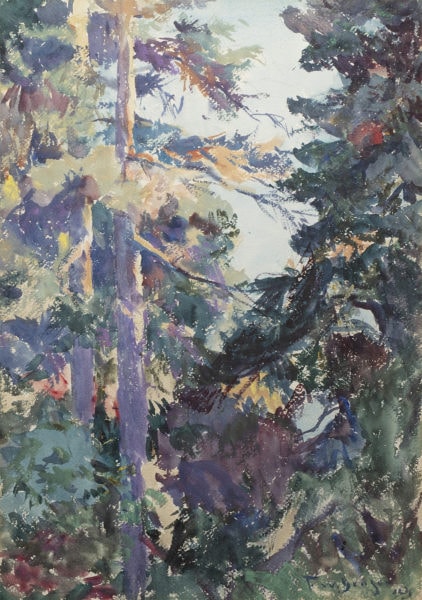 John A. Mahey, American Paintings from the Bentley-Sellars Collection (Jacksonville, FL: The Cummer Gallery of Art, 1975), 68, no. 60.

Note: The reverse side bears a playful handwritten conversation between Benson “Benny” and his friend and colleague, painter Edmund C. Tarbell (1862–1938), “Ned.”

Benny – We like this watercolor – It's not as commercial as your other watercolor efforts of birds & the like. Ned Tarbell

Neddy a gift for you – a noncommercial friend. (But my birds are wonderful – like my ducks, Neddy. Affectionately, Benny.

Together, Benson and Tarbell founded a summer art school in Newcastle, New Hampshire[1] and turned the Museum School in Boston into an internationally renowned institution.[2] In the fall of 1938, the two painters had a joint retrospective of their work shown at the Museum of Fine Arts, Boston; unfortunately, Tarbell died a few months before the opening.[3] One critic wrote of it, “Tarbell is a seeker of sunlight for his pictures, it is Benson who really captures it...No one surpasses him in it.”[4]

Benson won a gold medal for watercolor at the Sesqui-Centennial exhibition of 1926.

Frank Weston Benson, “America’s Most Medaled Painter,” was renowned for his images of female figures on a hilltop presented with Impressionist atmospheric techniques

Frank Weston Benson, “America’s Most Medaled Painter,” was renowned for his images of female figures on a hilltop presented with Impressionist atmospheric techniques

Frank Weston Benson was born in Salem, Massachusetts, in 1862, the second of six children of a wealthy Boston cotton merchant. With the exception of a few years spent studying abroad, he was a lifelong resident of Salem. Benson began his artistic studies in 1880 at the School of Drawing and Painting at the Museum of Fine Arts in Boston under the German professor Emil Otto Grundmann. Among his fellow students were Impressionists Robert Reid and Edmund Tarbell, who became Benson’s lifelong friends as well as fellow members of “The Ten,” a group associated with Impressionism and certain other styles, such as Tonalism. Benson would become one of the leading American artists of the second half of the nineteenth century and the first half of the twentieth, praised for his “strengths of modeling, in free, spontaneous, sympathetic sweep of brush” and for his “shimmering color and radiance of light.”1

In 1883, Benson left for a three-year stay in Paris, where he studied at the Académie Julian under Gustave Bouguereau and Jules Joseph LeFebvre. Benson spent the summer of 1884 at the seaside artists’ colony of Concarneau, Brittany, on the west coast of France, and later visited Germany, Italy, and England. Benson’s early works were of marine and rural subjects and in 1885, he exhibited his large composition After the Storm (1884; private collection) at the Royal Academy. He then returned to America, where he opened a studio in Salem. He later worked as a portraitist and teacher in Portland, Maine, for two years before taking a position in Boston, where he specialized in illustrations of upper-class women in calm, domestic settings.

In 1888, Benson married Ellen Perry Peirson, and the couple had four children: Eleanor, George, Elizabeth, and Sylvia. The following year, he was granted a teaching position at the Boston Museum. Benson’s first American showing was at the Society of American Artists in 1888. This was followed by his first major exhibition in Boston with his friend Tarbell, at the J. Eastman Chase Gallery in 1889. Benson received wide recognition for his works, including numerous awards such as the National Academy of Design’s Hallgarten Prize in 1889 for a nude titled Orpheus (private collection), the Clarke prize in 1891 for Twilight, and a medal at the 1893 World’s Columbian Exposition in Chicago.

Searching for a style of his own, Benson spent several summers in Dublin, New Hampshire, between the late 1880s and the mid-1890s. His works somewhat recalled Vermeer, Meissonier (called the “Dutch little master“), and William Merritt Chase, but in a more traditional vein. Some of Benson’s paintings from that period include My Little Girl (1885, private collection), which won third prize at the 53rd Boston Art Club exhibition in 1886.

In 1896, Benson decorated ceilings and walls in Washington, D.C.’s new Library of Congress with the murals Three Graces and The Four Seasons. The project inspired several decorative compositions of statuesque, allegorical figures. The same year, Benson won the Shaw prize from the Society of American Artists for his decorative allegory Summer (1890).

Shortly before 1900, Benson began to work outdoors often, embracing the principles of plein air painting. His first significant works from this period were Children in the Woods (1898, private collection) and The Sisters (1899, private collection). Both paintings were composed in a fluid and colorful impressionist technique, and The Sisters, which featured the artist’s two youngest daughters, Sylvia and Elizabeth, won first place at the Carnegie Institute exhibition in November 1899 and medals in Paris in 1900, Buffalo in 1901, and St. Louis in 1904. The success of these works helped Benson, who was becoming known as America’s most-medaled painter, to establish his artistic path. Over the next twenty years, Benson painted his best-known images, depicting his wife and daughters wearing white or pastel-colored dresses and often silhouetted against an azure sky. Many of his vibrant images reflect the beauty of the clear air of Maine, where he summered starting in 1901 on North Haven Island in Penobscot Bay.

Benson’s later paintings shifted to wildlife subjects, reflecting his love for nature, fishing, and hunting. In 1913, he stopped teaching and started to produce etchings, mainly of wild fowl. His first solo exhibition of etchings and drypoints in 1915 proved extremely popular. After 1919, he focused on producing watercolor landscapes, which were in great demand. Active until nearly the end of his life, he maintained a studio in Boston until 1944 and summer houses in Maine and Cape Cod before retiring to Salem, where he died on November 14, 1951.