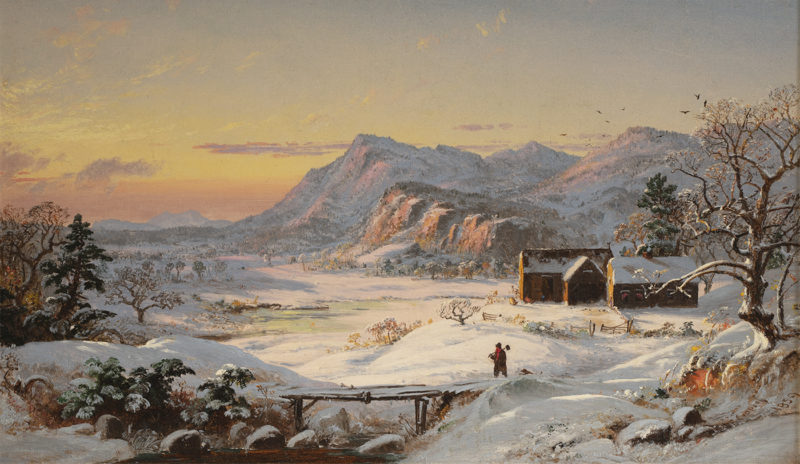 The American Scene: A Survey of the Life and Landscape of the 19th Century (New York: Hirschl & Adler Galleries, 1969), 23 (as Winter, Conway Valley, New Hampshire).

Note: This meticulously rendered American scene was painted while Cropsey was living in England – executed early in 1859. He likely sold it to a collector or dealer in England before the end of 1859, which may be the reason he painted a second, nearly identical composition later that same year,[1] now in the collection of the Currier Museum of Art, Manchester, New Hampshire.

“While in England, Cropsey sent paintings back to America and was well represented at the National Academy of Design’s exhibits during his absence... Cropsey was commissioned in 1857 by E. Gambart & Co. to paint thirty-six views of America. Gambart planned to publish these as the American Scenery series of colored lithographs. Owing to financial hardship, Gambart cancelled the commission after the first sixteen paintings were purchased. These works were of familiar views of America, including Niagara Falls, the White Mountains, the Hudson River, Lake George, and the Connecticut River.”[2] Either the present work or the version in the Currier Museum collection was a study for the 15 x 24 inch painting sold to Gambart for the American Scenery series, but unfortunately the larger work is unlocated, so it’s impossible to verify which of the smaller works was used for the engraver’s commission.[3]  The 1859 production of small picturesque American landscape scenes for purchase by English collectors or American travelers helped fund his progress on larger works.[4]