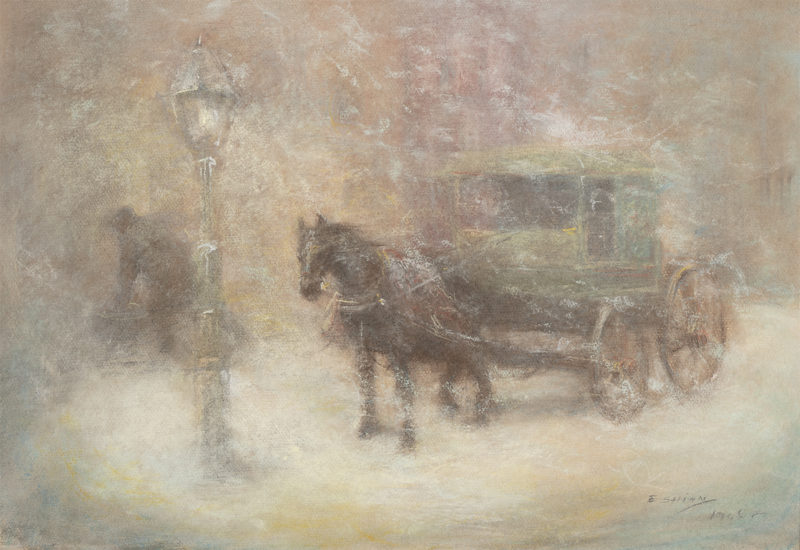 Shinn’s work as a magazine illustrator formed an artistic foundation based in early American Realism, which later absorbed the compositional arrangements of Degas. As a member of “The Eight” and an Ashcan artist, Shinn’s depictions of parks and theater life captured the urban reality that characterized turn of the century New York City.

Everett Shinn was born in 1876 in Woodstown, New Jersey. At fourteen-years-old, Shinn left Woodstown and moved to Philadelphia, where he enrolled at the Spring Garden Institute to study mechanical drawing.[1] Two years later,

Shinn’s work as a magazine illustrator formed an artistic foundation based in early American Realism, which later absorbed the compositional arrangements of Degas. As a member of “The Eight” and an Ashcan artist, Shinn’s depictions of parks and theater life captured the urban reality that characterized turn of the century New York City.

Everett Shinn was born in 1876 in Woodstown, New Jersey. At fourteen-years-old, Shinn left Woodstown and moved to Philadelphia, where he enrolled at the Spring Garden Institute to study mechanical drawing.[1] Two years later, in 1892, he began to work as a draftsman at Thackery Gas Fixture Works, but after less than a year was fired for doodling on his design plans. In parting advice, his boss instructed, “Get out and do the thing you do best… Newspaper, magazine, I would suggest,” leading Shinn in the direction of newspaper illustration.[2]

The Philadelphia Press was eager to hire a talented individual such as the eighteen-year-old Everett Shinn, who demonstrated remarkable talent for a young man with little formal training. Shinn moved from newspaper to newspaper, following wherever an increase in pay led him, developing his skills as an illustrator. Working at several publications allowed for Shinn to cross paths with the likes of George Luks and William Glackens, who similarly shared his distaste for the formalism in American Impressionism that ignored the overwhelming urban development occurring in the last decade of the nineteenth century.[3]

In the 1890s, there was a clear disconnect existing between then-current American life and its portrayal in art; newspapers and magazines were a haven for artists that sought to capture the convergence of cultures and social classes. In the spring of 1893, Shinn, along with fellow Pennsylvania illustrators Glackens, Luks, John Sloan, and Edward Davies, began to attend weekly meetings at the studio of Robert Henri, an artist who encouraged a new form of realism that preached lessons of urbanity. These meetings resulted in what became known as the Charcoal Club, a short lived organization that introduced a group of men who would go on to become known as “The Eight.”[4]

When the Charcoal Club disbanded in the fall of 1893, Shinn acquiesced to the lure of academic training and enrolled in the Pennsylvania Academy of the Fine Arts. While the classes that Shinn took helped to hone his raw illustrative talent, the overall span of his career seems to revert to his roots in publication: “He retained the swift execution required of an illustrator-reporter and continued to work largely from memory.”[5] In 1897, Shinn accepted a position from the New York World, and subsequently moved to the city with his new wife, Florence Scovel.

Accepting a job at the New York World permitted Shinn to re-join the ranks of Glackens and Luks, who were already employed at the same publication. Entranced by the energy of New York City, Shinn’s primary focus shifted to street scenes and metropolitan life around 1899. Part of Shinn’s initial success as an artist can be attributed to his choice of subjects. Through his selection of recognizable areas in Manhattan, Shinn attempted to directly confront his audience with the metropolitan experience which would redefine the twentieth-century American identity. Park Scene (1899, collection of Mrs. James H. Fogelson) and Madison Square, Dewey Arch (1899, private Collection) illustrate Shinn’s adeptness with pastels; the primary use of black and white, with minor accents of color, is characteristic in his early works.

Shinn’s career began to take off at the dawn of the new century: In 1900, he had his first solo exhibition at Boussad, Valadon & Co., and of the forty-four pastels exhibited, thirty were sold.[6] Shortly thereafter, Shinn and his wife took their first trip abroad, traveling to London and Paris. The most significant consequence of this trip was the profound influence of Edward Degas on Shinn’s work. Degas’s cropped compositions, use of oblique angles, and attention to the audience were all stylistic elements absorbed by Shinn.[7] A common interest in the spectatorship of stage performance was another aspect Shinn gleaned from Degas, even after his return to New York City.

Despite their differences, 1908 was a prolific year for the small group of men who had remained close since their Charcoal Club days. Disgruntled by the Academy’s reoccurring rejection of their works, Henri, Sloan, Glackens, Luks, Shinn, Lawson, Arthur B. Davies, and Maurice Prendergast decided to take matters into their own hands and held The Exhibition of the Eight at Macbeth Gallery.[8]

Members of “The Eight” were united by their realistic approach to subject matter, not by their style.[9] Theater life clearly became Shinn’s primary focus after his brief European sojourn; consequently, his color palette began to brighten in order to accommodate the vibrant hues seen in costumes and set backdrops. Shinn’s ability to balance realism with his personal flair for drama was one of the standout characteristics that differentiated his works from his peers. Girl in Red on Stage (1905, Private Collection) is an example of Shinn’s earlier penchant for incorporating the audience into his spectator experience, while London Music Hall (1918, Metropolitan Museum of Art) exhibits his later tendency to crop his compositions and focus solely on the performers.[10]

Shinn continued to work throughout the duration of his life. His works from the 1930s tended to feature circus figures, and more specifically aerialists and clowns in the 1940s.[11] In 1953, Shinn passed away from lung cancer in at New York Hospital.

1876 Born in Woodstown, New Jersey
1890 Enrolled at the Spring Garden Institute, a technical school specializing in mechanical drawing and architecture
1892 Began work as a draftsman at Thackery Gas Fixture Works
1893 Hired as an illustrator by The Philadelphia Press
1893–1895 Enrolled at the Pennsylvania Academy of the Fine Arts
1897 Hired by the New York World
1898 Married Florence Scovel on January 26
1899 Accepted art editor position for Ainslee’s Magazine
1900 Everett and Florence Shinn move to New York, taking up residence at 145 East 21st street.
First one-man exhibition at Boussad, Valadon & Co.
Traveled to London and Paris with his wife
1901 Became the instructor of illustration at the New York School of Art
1908 The Exhibition of the Eight at MacBeth Gallery, NY
1912 Divorced wife Florence Scovel
1913 Married Corrine Baldwin
1924 Married Gertude McManus Chase
1933 Married Paula Downing
1953 Passed away at New York hospital, cause of death attributed to lung cancer