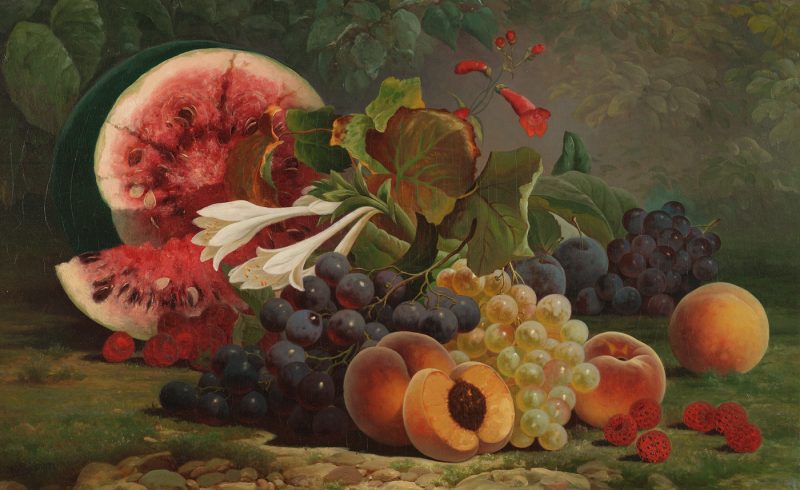 The Bounties of Nature

The Bounties of Nature

Private collection, acquired from above, 2000

Henry and Sharon Martin, Connecticut, acquired from above, 2012

William Mason Brown painted landscapes before becoming known as a painter of meticulously detailed still lifes. He was a regular exhibitor at the National Academy of Design.

William Mason Brown was a member of the second generation of Hudson River School artists, known for his meticulous rendering of detail. In the early part of his

William Mason Brown painted landscapes before becoming known as a painter of meticulously detailed still lifes. He was a regular exhibitor at the National Academy of Design.

William Mason Brown was a member of the second generation of Hudson River School artists, known for his meticulous rendering of detail. In the early part of his career, he was a landscape painter, and he later gained fame for his carefully executed still lifes. Born in Troy, New York, he studied with Abel Buell Moore, Troy’s preeminent portraitist, and began his own career as a portrait painter. In 1850, he moved to Newark, New Jersey, and began to specialize in landscape painting. In 1858, Brown moved to Brooklyn, New York, and shortly thereafter he abruptly shifted to painting still lifes. He was known for his photographic paintings of fruit, and his work reached a wide audience through chromolithographic reproductions.

Brown’s landscapes follow the Romantic (as opposed to naturalistic) tradition of Hudson River School landscape painting established by Thomas Cole earlier in the nineteenth century. His landscapes exhibit exacting precision in the foreground, especially in the water and mountains they depict. According to Linda S. Ferber and William H. Gerdts, noted Hudson River School scholars, “the tight painting and particularization of these elements of nature presage his change . . . from romantic landscapes to crisply and meticulously detailed still lifes.”[1] The technique as it manifests in Brown’s still lifes is dazzling, and he excelled in conveying the natural qualifies of fruit: its variegated coloring, its shape, and its volume.

Brown’s fame as a still-life painter catapulted when he sold the painting A Basket of Peaches Upset to William Schaus, a New York art dealer, for $2,000, a stratospherically high price for the time. The painting was reproduced through the relatively new technique of chromolithography, or color-printed lithography, which made Brown’s work accessible to a broader segment of the art-buying market than ever before. Currier & Ives also bought and lithographed some of his fruit paintings. Brown’s “hard, tight drawing and particular color scheme” made his work well suited to chromolithographic reproduction.[2] Still-life paintings were widely used for decorative purposes in the 1860s and 1870s, and they became known as “dining-room paintings.” [3]

When he became a still-life painter in the 1860s, the then-current fashion for still lifes depicted in natural settings undoubtedly influenced his work. The natural setting still life, which was widely used by many artists in the mid-nineteenth century, originated from the views of British aesthetician John Ruskin, who regarded the truthful recording of nature as the highest form of art. A group of painters centered in Brooklyn became known as the American Pre-Raphaelites because of their adherence to Ruskin’s values.

Brown would have been aware of these ideas, but he was not a strict Ruskinian. Although he frequently placed his fruits and flowers in natural settings, he did not portray them as they would appear in nature; a human hand had clearly intervened to ensure a harmonious arrangement of the scene.[4] The composition of his popular chromolithograph, Basket of Peaches Overturned, may have influenced the work of a younger contemporary, Levi Wells Prentice (1851–1935).[5] Brown also painted tabletop still lifes that depict nature’s creations indoors, where fruit is arrayed among ornate ceramic and silver objects. These paintings demonstrate the increased importance of consumer culture and home decoration in the post–Civil War era.[6]

Although Brown’s greatest fame came from his still lifes, his landscape paintings remained a well-known part of his legacy; in his obituary, the Brooklyn Daily Eagle remarked, “he was a famous landscape painter, his pictures being held in high esteem for their fidelity to the rich colorings of nature.”[7] His ability to render color and natural brilliance distinguished his entire body of work.

Brown was an important artist in mid-nineteenth century Brooklyn, New York. He was one of the founders of the Brooklyn Art Social, later the Brooklyn Art Association, and he exhibited regularly at the National Academy of Design. His works are included in the collections of many major museums, including the Brooklyn Museum, the Pennsylvania Academy of the Fine Arts, the Corcoran Gallery of Art, the High Museum of Art, and the Cleveland Museum of Art.

1828 Born in Troy, New York
1840s Began art studies with Abel Buell Moore, Troy’s leading portrait painter
1850 Moved to Newark, New Jersey
1851 Paintings included in an exhibition and sale organized by the New Jersey Art-Union; the Art-Union purchased five of his landscapes for prizes at the exhibition
1858 Moved to Brooklyn, New York
1859 Was one of the founders of the Brooklyn Art Social, forerunner of the Brooklyn Art Association
1866 Was one of a group of artists that established the Brooklyn Academy of Design
1868 Currier & Ives reproduced one of his apple pictures by chromolithography; Dominique Fabronius chromolithographed Autumn Fruits
1898 Suffered heatstroke on August 26 and died on September 2 at his home in Brooklyn.