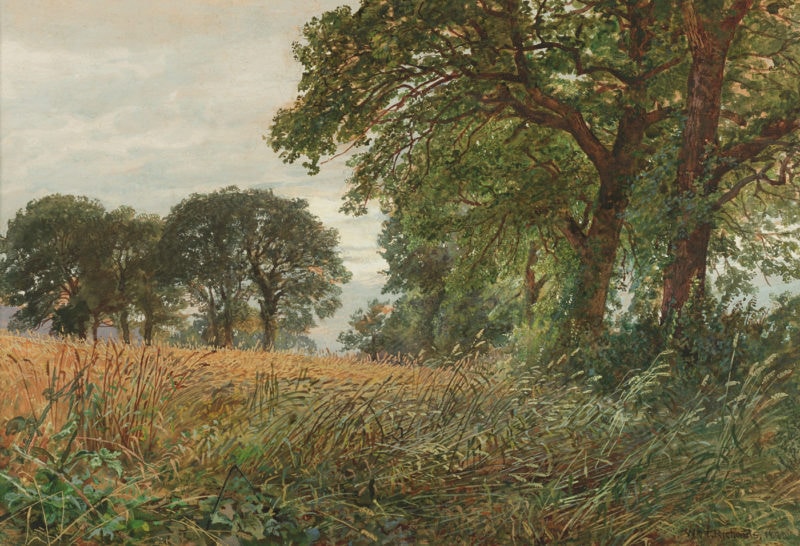 Sale, The American Art Galleries, The Estate of the late Mr. George Whitney of Philadelphia, New York, December 17, 1885, no. 134, from above

S. A. Coale, acquired from above

American Art Association, New York, New York, The Works of Mr. Wm. T. Richards, In the Collection of American and Foreign Paintings, To Be Sold on Account of the Estate of the Late Mr. George Whitney, of Philadelphia, December 8–16, 1885, no. 134

The Newington-Cropsey Foundation, Hastings-on-Hudson, New York, Scenes from a Century Past—Reflections of the Spirit, May 15–June 30, 2000 (as Tennyson’s Farm, Farmington, Isle of Wight)

The Works of Mr. Wm. T. Richards, In the Collection of American and Foreign Paintings, To Be Sold on Account of the Estate of the Late Mr. George Whitney, of Philadelphia (New York: American Art Association, 1885), 11, no. 134.

Scenes from a Century Past, Reflections of the Spirit (Hastings-on-Hudson, New York: The Newington-Cropsey Foundation, 2000), n.p. (as Tennyson’s Farm, Farmington, Isle of Wight).

William Trost Richards was one of the most accomplished American artists of the nineteenth century and enjoyed a long and successful career in both oils and watercolors. As Richards scholar Dr. Linda Ferber states, “For Richards, watercolor was not a secondary interest, but a medium whose expressive possibilities were as important as those of oil.”[1] Born in Philadelphia in 1833, he began to study landscape painting under German artist Paul Weber in 1850. He quickly befriended several Hudson River School painters of the period, including John Frederick Kensett and Frederic Edwin Church, and his early training included extensive travels throughout Europe in their company.

Upon his return to Philadelphia in 1856, he was introduced to the American Pre-Raphaelite movement while visiting exhibitions at the Pennsylvania Academy of the Fine Arts. He quickly mastered the style and his works from this period portray a Ruskin-influenced respect for nature. A contemporary critic described his works as:

…so carefully finished in some of them are the leaves, grasses, grain-stalks, weeds, stones, and flowers, that we seem not to be looking at a distant prospect, but lying on the ground, with the herbage and blossoms directly under our eyes. Marvellous [sic] in accurate imitation are the separate objects in the foreground of these pictures: the golden-rod seems to wave, and the blackberry to glisten…and some of these elaborate pictures of Mr. Richards thus contribute signally to the remarkable variety of style and individuality of manner which are so desirable a trait of our American school.[2]

It was on summer trips to the coasts of New England and New Jersey, however, that Richards became infatuated with the sea. His precise method transferred perfectly from his Pre-Raphaelite landscapes to his luminous seascapes; in both oil and watercolor he was able to capture the fluidity and gentle motion of the water as well as the delicate atmosphere of the seaside. An 1877 article described his seascapes as having “a broad and masterly sweep given to the wave-forms; every movement of the waves, from those which break over the foreground sands to the great rollers in the distance, is drawn and painted with power and skill…”[3]

Yet more traditional landscape painting always remained a part of his artistic practice. In 1853 Richards traveled up the Hudson River for the first time and, like many of his Hudson River School predecessors, was drawn to the area again and again; he made trips to the Adirondacks most summers between 1855 and 1870. Like Thomas Cole and Asher B. Durand before him, Richards saw the dramatic, rugged landscape as part of the national identity. As a Pre-Raphaelite, he used his hyper-realistic style to describe in detail the vastness of the scenery. At the end of his life, as a well-established luminist, he painted en-plein air at Lake Placid in 1905, focusing on the light and atmosphere of the area’s unique topography. This type of subject matter spanned throughout Richards’s career and a survey of his work from the Adirondacks exemplifies his progress as an artist through various styles. In 2002 the Adirondack Museum exhibited a body of works created in the Adirondacks between 1850 and 1870, bringing to light just how prolific Richards was outside of his famous coastal scenes. One of his masterpieces from this area was The Bouquet Valley, Adirondacks, 1866, purchased from him by the prominent Philadelphia collector George Whitney and now in the collection of the Biggs Museum of American Art.

Richards continued to paint, travel, and exhibit up until the end of his life. He exhibited at the Paris Salon in 1873 and was awarded prizes from the Pennsylvania Academy of the Fine Arts and the 1876 Centennial Exhibition, also in Philadelphia. His paintings convey a unique peace and serenity and are collected by every major institution of American art.

1833 Born in Philadelphia on November 14th
1850 Began to study painting with Paul Weber
ca. 1852 Possibly took classes at the Pennsylvania Academy of the Fine Arts
1852 First landscapes exhibited at Pennsylvania Academy of the Fine Arts
1854 Shared a studio with Alexander Lawrie in same building as James Earle’s gallery
Visited New York and met John Frederick Kensett, Frederic Edwin Church, and Samuel Colman, later that year met Jasper Francis Cropsey
1855 Traveled to Europe with William Stanley Haseltine and Lawrie to study painting, visited Paris, Switzerland, Lake Maggiore, Genoa, and Pisa; spent winter in Florence
1856 Left Florence for Düsseldorf with William Stanley Haseltine and Weber in spring; met Emmanuel Leutze and Albert Bierstadt
Returned to Philadelphia; was married and moved to Germantown
1858 Saw works by the Pre-Raphaelites exhibited in Philadelphia, added this influence to his Ruskinian landscapes which focused on truth to nature
1859 Took summer sketching trips to the Catskills and Atlantic City, NJ
1860 Spent summer in Bethlehem, PA and Atlantic City
1861 Took summer sketching trip to the Adirondacks
1863 Became a member of the Association for the Advancement of Truth in Art; elected Academician of Pennsylvania Academy of the Fine Arts
1865 Spent the summer in Nantucket and discovered his love of the sea; two of his four children died
1866 Spent summer at Mount Desert Island, ME; left for Britain in fall
1867 Traveled to Darmstadt, Venice, Florence, Rome, Naples, Switzerland, and Paris; visited Exposition of 1867 in Paris; returned to Philadelphia in autumn
1868 Summered in Atlantic City and the Adirondacks
1869 Spent summer in Nantasket, MA and Isles of Shoals, NH
1870 Spent summer at Atlantic Beach on the Jersey Shore; painting focused more on seascapes in both oil and watercolor
1871 Traveled during summer to Long Beach, NY, Providence, Newport, Boston, Gloucester, and Isle of Shoals
1872 Spent summer in the Adirondacks, Maine, Isle of Shoals, Gloucester, and Narragansett
1873 Exhibited At Atlantic City at the Paris Salon
1874 Spent summer in Newport and the Adirondacks
1875 Bought his first house in Newport, RI; from then on spent summers in Newport and winters in Germantown with frequent trips to the British Isles and Channel Islands
1876 Awarded bronze medal at Centennial
1877 Began to paint large gouaches on gray carpet paper
1878 Traveled to England, visited Cornwall and London
1880 Richards’s eighth and youngest child died in March; traveled to Antwerp, Brussels, Paris, Rouen, Havre, Isle of Wight, and from Land’s End to Edinburgh; returned to Newport in fall
1884 Left house in Germantown for farm in Chester County, PA
1885 Traveled to Tacoma Territory in summer, spent winter in Cambridge; awarded Temple Silver Medal by the Pennsylvania Academy of the Fine Arts
1889 Awarded bronze medal at Paris Exposition
1890 Moved permanently to Newport
1891 Traveled to Ireland, Scotland, England, and Paris
1892 Continued European travels in Venice, Amalfi, Capri, Naples, and back to England, Ireland, and Scotland before returned to Newport in August
1896–1900 Made several trips to London
1900 Mrs. William Trost Richards died in November
1901 Took summer trip to Norway
1902 Suffered a stroke
1903 Spent summer traveling to London, Guernsey, New Forest, Ireland, and Edinburgh
1905 Awarded the Pennsylvania Academy of Fine Arts Gold Medal of Honor; spent summer on Cornish coast; died in Newport on November 8, buried in Philadelphia