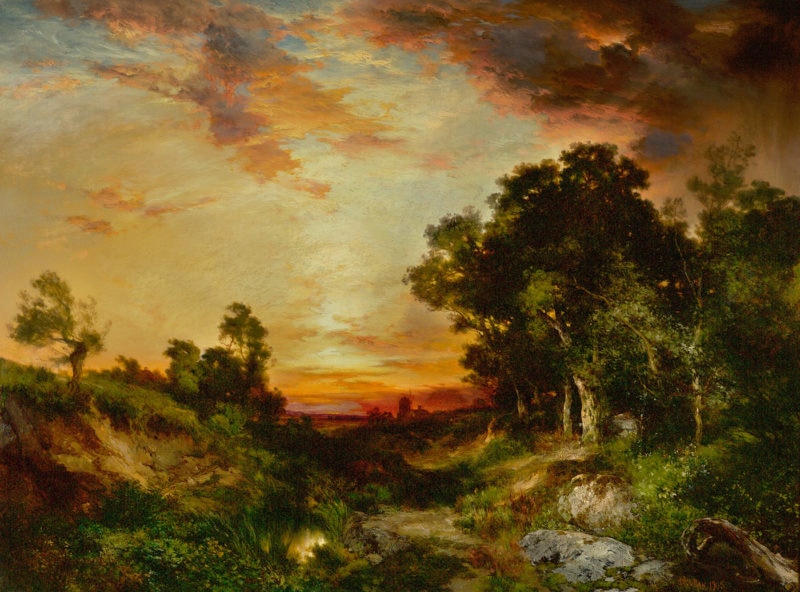 Private collection, acquired from above, 2009

Note: This painting will be included in the forthcoming catalogue raisonné of the artist’s work by Stephen L. Good and Phyllis Braff.

A master of composition and inspired by J.W.M Turner and Jean-Baptiste-Camille Corot, Thomas Moran became known for monumental romantic landscapes of the American West and his efforts in establishing the first national park at Yellowstone.

A master of composition and inspired by J.W.M Turner and Jean-Baptiste-Camille Corot, Thomas Moran became known for monumental romantic landscapes of the American West and his efforts in establishing the first national park at Yellowstone.

Thomas Moran was one of the best-known and most influential painters of the Hudson River School working in the United States in the second half of the nineteenth century. His iconic watercolors and oil paintings of the American West not only made him one of the country’s preeminent landscape artists, but also helped to convince members of Congress to establish the United States’ first national park at Yellowstone in 1872. While he was best known for these works, his subjects also included literary, marine, European and Mexican themes, among others.

Moran was born in Bolton, Lancashire, England, on February 12, 1837. His father, also named Thomas, was a master weaver who worked long hours in the Lancashire textile mills. Dreaming of a better life for his two sons, Thomas and Edward, he saved enough money to bring his family to America in 1844. They settled in a part of Philadelphia known as Kensington.

Moran was educated in the Philadelphia public schools and showed an early inclination toward art. As a youth, he worked as a wood engraver but soon, inspired by his older brother, Edward, an internationally-known marine painter, he began to study art. Edward taught a teenage Thomas the techniques of drawing and painting. Later, Thomas was encouraged and tutored by James Hamilton (1819-78) and other local artists. At the age of 18, Thomas started working more in watercolors, and three years later, he was painting full-time in Edward’s studio. His first solo exhibition of watercolors was held at the Pennsylvania Academy of Fine Arts in 1856. Living in Pennsylvania gave Moran the opportunity to see landscape exhibits by American and British artists at the Pennsylvania Academy of Fine Arts; however, there was little opportunity for formal artistic training in the United States.

In the 1850s, many young artists seeking new approaches to landscapes were influenced by the philosophies of the Hudson River School, an important movement in American art with roots in Romanticism. Moran was one such artist, making trips into the country outside of Philadelphia to paint rural scenes. He followed the standard seasonal landscape artist’s schedule, sketching outdoors during the summer and working in the studio in the winter.

In 1861, Thomas and Edward Moran sojourned to London to study the works of J.M.W. Turner, whose atmospheric and luminous effects greatly inspired Thomas.. As a student at London’s Royal Academy, Thomas was enchanted by the works of Turner; his admiration of the Romantic artist’s colors and landscapes would later be manifested in his own works and earn him the title “The American Turner.”

After returning from Europe in 1862, Moran married Mary Nimmo, and the couple moved to Newark, N.J., where they had three children. With his wife, who became an accomplished etcher, Moran played a leading role in popularizing printmaking during the etching revival that peaked in the 1880s.

In 1866, Moran went to Europe again. During a year abroad, he mainly lived in Paris, where he met Jean-Baptiste-Camille Corot (1796-1875), but also visited Italy, where he studied the works of the great masters. In the spring of 1867, Thomas exhibited his first major work, Children of the Mountain (1867), in the Exposition Universelle in Paris.

Moran’s introduction to the American West came in the early 1870s when he traveled to Yellowstone, Wyo., with the United States Geological and Geographical Survey of the Territories, which was headed by Ferdinand Hayden. In 1873, Moran’s visited the Grand Canyon with John Powell’s government survey, and in 1874, he went with Hayden to see the Mountain of Holy Cross in Eagle County, Colo. These trips formed the foundation for much of the rest of Moran’s career. He produced three major oil paintings that were inspired by his experiences with the surveys: The Grand Canyon of the Yellowstone (1872), Chasm of the Colorado (1873-1874) and the Mountain of the Holy Cross (1875).

Although he painted many other subjects, including panoramic images from Europe, Mexico and Long Island, Moran’s depictions of the western United States remain his best-known works and his most important contribution to American art. Robert Allerton Parker wrote that Moran’s “expression has passed into our very culture. Perhaps more than any other American painter of the latter half of the nineteenth century, Thomas Moran compelled the American people to appreciate the beauty of its own continent, to look upon its wonders through his eyes, and to save these resources of natural beauty.”1

1837 Born in Bolton, Lancashire, England, on February 12.
1844 Moved with his family to the United States, settling in Kensington, Penn.
1853 Apprenticed to a wood engraver and illustrator in Philadelphia
1856 Created his first oil painting, Among the Ruins There He Lingered
1861 Went to London and studied at the Royal Academy
1862 Returned to America and married to Mary Nimmo (1842–1899)
1866 Returned to Europe to study works by European masters; met Corot
1867 Exhibited Children of the Mountain at the Exposition Universelle in Paris
1871 Traveled to Yellowstone for the first time
1872 Watercolors produced after the 1871 expedition influenced Congress to
establish Yellowstone as America’s first national park
1872 Grand Canyon of the Yellowstone completed and purchased by the Congress for
$10,000
1872 Toured Yosemite Valley in California
1873 Explored the mountains of Utah to the north rim of the Grand Canyon of
the Colorado River
1875 Completed the third of his monumental western landscape paintings,
Mountain of the Holy Cross.
1880 Produced industrial scene, Lower Manhattan from Communipaw, New Jersey
1882 Returned to Bolton, Lancashire, England
1886 Visited Venice for the first time
1899 Wife, Mary, died of typhoid fever
1900 Returned to Yellowstone with youngest daughter Ruth
1916 Moved to Santa Barbara, Calif.
1926
Died in Santa Barbara on August 25