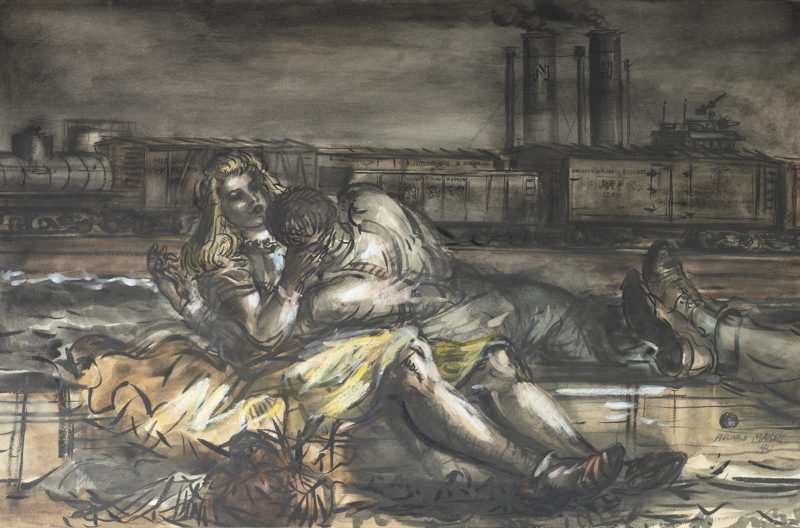 The Art Institute of Chicago, Illinois, Twenty-first International Exhibition of Water Colors, May 14–August 23, 1942, no. 381

Frederick A. Sweet, The Twenty-first International Exhibition of Water Colors (Chicago: The Art Institute of Chicago, 1942), no. 381.

I. Biography
Born in Paris on March

I. Biography
Born in Paris on March 14, 1898, Reginald Marsh was the progeny of two talented artists: Fred Dana Marsh, a painter specializing in industrial scenes, and Alice Randall, a painter of miniatures.(1) Two years after the artist’s birth, the Marsh family decided to leave France for America, settling in Nutley, New Jersey. Growing up, Reginald had a well-to-do education afforded to him on behalf of a wealthy grandfather, who paid the artist’s tuition to Yale. Marsh embraced the collegiate lifestyle and an artistic direction while working on one of the student publications, Yale Record, where he met lifelong friend William Benton. After graduating from Yale in 1920, Marsh moved to New York, where he studied at the Art Students League; he gained an impressive amount of experience painting and drawing under an impressive faculty of instructors, including John Sloan, George Bridgeman, George Luks, and most importantly, Kenneth Hays Miller.(2)

Immersing himself within the teeming life of New York City, Marsh job as a staff artist for the New York Daily News led him to explore the underbelly of society: Trolling the streets of Lower Manhattan, he gleaned inspiration from the burlesque shows along Bowery Street, storefront windows and advertisements, and the beaches of Coney Island. The defining quality of Marsh’s work was his satirical approach to portraying what would otherwise be Gotham’s most sinister subjects, and Miller encouraged the artist to focus on the buxom women of Bowery, telling Marsh, “Sex is your theme.”(3) Given that the nearly one third of the artist’s oeuvre captured the spirit of modernity in the form of burlesque dancers, it is apparent that Miller’s assertion rang true. In 1922, Marsh enrolled briefly in the Art Students League, where he met the Betty Burroughs, whose father was a curator at the Metropolitan Museum of Art. (4) The couple married one year later, which marked the point in Marsh’s career when he began painting seriously; his efforts were awarded in 1924, when the Whitney Studio Club offered the artist his first one-man show.

The first time Marsh traveled abroad since his infancy occurred in 1925, when the artist and his wife traveled to Europe; the artist’s French encounter with the Baroque style resulted in a definitive shift in his artistic approach. His began to crowd his compositions with figures, infusing them with a sense of chaos, mayhem, and overindulgence that added an overwhelming vitality to each individual piece. Marsh’s paintings incorporated intense, sketch-like brushstrokes, while his etchings began to demonstrate a frenzied attention to detail to physical and architectural attributes. (5) Upon his return, Marsh resumed an acquaintance with his past instructor Kenneth Hays Miller, whose influence helped the artist synthesize the form and design qualities typical of the Baroque era with the immediate and raw life of New York City. During the late 19th and 20th centuries, Union Square appealed to many members of Manhattan’s burgeoning bourgeois class, and in 1926 Marsh joined the myriad of artists working in one of the 14th Street studios.(6) When the market crashed in 1929, Marsh was captivated bythe devastating poverty that spread through New York City; he justified his artistic focus on the wreckage and survivors of Black Tuesday by explaining, “This world [of poverty] had greater human and pictorial value than respectable society.”(7)

Marsh’s marriage to Betty ended in 1932, but the artist was quick to remarry one year later: Felicia Meyer, a painter fifteen years younger than Marsh, became the second wife of the artist. This spousal swap occurred right around the time that the government began to revive public artwork in federal buildings, and Marsh was one of twelve artists selected for two important commissions: the first, a pair of frescoes in the US Post Office, and the second, a series of eight paintings in the New York Customs House, which portrayed an ocean liner arriving into a New York port.(8) These works were stylistic outliers for Marsh, and the artist soon reverted back to his traditional elements, the “garish colors, excessive detail, limited space, awkward poses, and ludicrous costuming” that were so typical in his burlesque and Coney Island scenes.(9)

These defining aspects of Marsh’s style made a fan out of William Benton, a former peer from Yale. A close friend of Marsh, Benton began collecting the artist’s work in 1934, and sometimes acted as his informal dealer. (10) Their relationship thrived on the college humor and playboy subjects in Marsh’s works, and Benton once described, “I like Marsh’s paintings for the same reason that I like Marsh. I like their lustiness, vitality, their marvelous craftsmanship, their love of life, their verve and zest.”(11) Benton was not the only one to take notice of the dark humor in the sexually-charged paintings by Marsh; critics described his work as “sumptuous and sexy,” “swirling,” “things of strange allure,” “tumultuous,” and “grossly satirical pictures of unbuttoned sexuality.”

Marsh continued to paint through the later years of his life, but also began to take on a more educational role: in the summer of 1946, he taught summer classes at the Art Students League, and later accepted a position as the head of the Paintings Department at the Moore Institute of Art, Science, and Industry in 1949. However, Marsh’s life was unexpectedly cut short in 1954 on July 3, Marsh suffered a fatal heart attack and passed away in Dorset, Vermont at the age of 56.

1898 Reginald Marsh born in France on March 4, to parents Fred Dana Marsh and Alice Randall
1900 Marsh family leaves France and settles in Nutley, New Jersey
1916- 1920 Marsh attends and graduates from Yale, where he worked as an illustrator for The Yale Record
1922-25 Staff artist for New York Daily News
1923 Marries first wife Betty Burroughs
1924 After a year of painting seriously, Marsh was offered his first solo show of oil paintings and watercolors at the Whitney Studio Club
1925-26 Traveled to Europe
1929 Begins to paint in egg tempera
1931 Awarded the M.V. Kohnstamm Prize from the Art Institute of Chicago
1933 Divorces Betty Burroughs
1934 Marries painter Felicia Meyer
1935 Commissioned by the Treasury Department Art Program to paint two murals in the Post Office Department Building in Washington, D.C.
1935-54 Teaches at the Art Students League
1937 Commissioned by the Treasury Department Art Program to a series of murals in the rotunda of the Customs House in New York
1940s Experiments using the “maroger medium” with Jacques Maroger
1945 Awarded the W.A. Clark Prize and Corcoran Gold Medal from the Corcoran Gallery of Art
1946 Awarded the J. and E.R. Pennel Purchase Prize by the Library of Congress for Girl Walking
During the summer, the artist taught drawing and painting at the Art Students League
1949 The Moore Institute of Art, Science, and Industry appoints the artist as head of the Department of Paintings
1954 Awarded the Gold Medal for Graphic Arts by the American Academy and the National Institute of Arts and Letters
July 3, Marsh suffers a fatal heart attack and passes away in Dorset, Vermont at the age of 56 years old