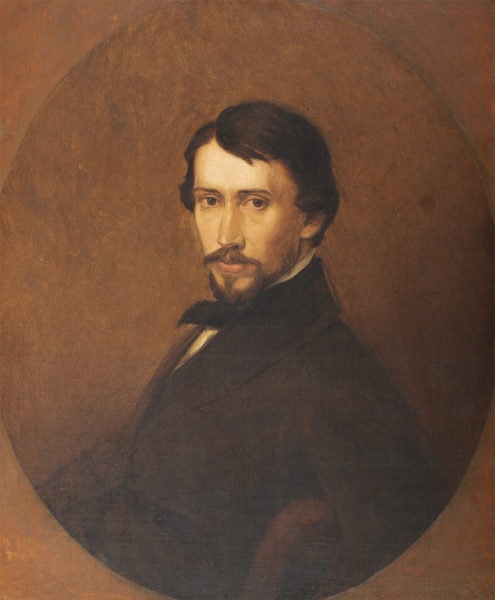 Sanford Gifford, MD, Cambridge, Massachusetts, by descent from above

Private collection, by descent from above

Note: In the fall of 1857, Gifford established a workspace at the Studio Building on West Tenth Street in New York, where he would work alongside painters such as Worthington Whittredge (1820–1910), William Hart (1823–1894), and Albert Bierstadt (1830–1902), among others. This portrait may have been the first painting he completed there.

The second-generation Hudson River School painter Sanford Robinson Gifford was a master at depicting light and atmosphere in landscapes. As the only painter among his contemporaries to be born and grow up

The second-generation Hudson River School painter Sanford Robinson Gifford was a master at depicting light and atmosphere in landscapes. As the only painter among his contemporaries to be born and grow up in the heart of the Hudson River Valley, Gifford had a special affinity for the mountains, valleys, and rivers of the region. Over the course of his career he also traveled extensively around the Catskill, Adirondack, and White Mountains, and ventured abroad on painting trips throughout Europe and the Middle East. This contrasting subject matter demonstrated his skill at depicting various ambient atmospheres with sincerity, charm, and realism.

Sanford Robinson Gifford was born in Greenfield, New York. He spent his childhood in Hudson (on the Hudson River south of Albany) where his father operated iron foundries and a bank. Coming from a reasonably wealthy family allowed Gifford the freedom to pursue his artistic endeavours unhindered by commercial incentives and trends.

From 1842 to 1844, Gifford attended Brown University in Providence, Rhode Island, before moving to New York City to become an artist. Gifford trained to become a portrait and figure painter by studying drawing, perspective, and anatomy under the direction of the British watercolorist John Ruebens Smith. He also took drawing classes at the National Academy of Design and studied the human figure in anatomy classes at the Crosby Street Medical College.

As a student Gifford developed solid skills at figure drawing; however, a sketching trip in 1846 to the Catskills and the Berkshires led to his focused interest in landscape painting. He later explained the profound significance of this trip to a friend: “Having once enjoyed the absolute freedom of the landscape artist’s life, I was unable to return to portrait painting. From this time my direction in art was determined.”[1] After this seminal trip, Gifford returned annually to experience the “absolute freedom” of the Catskills, White Mountains, Shawangunk Mountains, and Adirondack Mountains every summer for the next nine years. His companions on these trips included the artists Samuel Colman, Benjamin Champney, Alfred T. Ordway, and Aaron Draper Shattuck.

In 1847 some of Gifford’s first works were exhibited by the American Art Union. The same year Gifford exhibited his first landscape at the National Academy and submitted work almost annually thereafter. He was elected an associate of the Academy in 1851 and a full Academician in 1854.

In the summer of 1855 Gifford visited England, where he studied the glowing atmospheric effects in J.M.W. Turner’s work at London’s National Gallery; he also discussed Turner’s work with the art critic John Ruskin. He then visited Scotland, France, Belgium, Holland, Germany, Switzerland, and Italy. In the autumn of 1856 Gifford rented a studio in Rome where he painted his largest, and one of his most famous, works Lake Nemi (1856–57; Toledo Museum of Art). He exhibited Lake Nemi at the National Academy the same year. This work, with is depiction of radiant sunlight and hazy atmosphere, marks the crystallization of Gifford’s achievements in Europe and heralds the beginning phase of his mature style.

During the spring of 1857, Gifford spent time sketching with William H. Beard, Albert Bierstadt, and T. Worthington Whittredge. He then took a walking tour of southern Italy with Bierstadt in May, before ending his European tour with a trip to Innsbruck, Munich, Vienna, Prague, Dresden, Berlin, and Paris.

Gifford returned to America at the end of the summer in 1857. He rented studio Number 19 in the Tenth Street Studio Building in New York City, where his studio neighbors included Bierstadt, Frederic Edwin Church, John Frederick Kensett, William Hart, Jervis McEntee, and Whittredge. Gifford retained this studio for the next twenty-three years working in it during fall, winter, and spring, then spending most of his summers traveling in Northeastern locations such as those along the Delaware, Chenango, Susquehanna, Chemung, and Hudson rivers.

During the Civil War Gifford served in New York’s Seventh Regiment of the National Guard, which was based in New York City. He continued to paint throughout the war and his reputation grew rapidly with the production of landscape masterworks such as Gorge in the Mountains (Kauterskill Clove) (1862; Metropolitan Museum of Art), and historic wartime scenes including Bivouac of the Seventh Regiment at Arlington Heights, Virginia (1861; whereabouts unknown) and Camp of the Seventh Regiment, near Frederick, Maryland, in July 1863 (1864; Seventh Regiment Fund, New York). Gifford’s professional success during these years was deeply marred by personal tragedy; his brother Charles committed suicide in 1861, and his brother Edward died in conflict in 1863.

During the summer of 1867, Gifford spent most of his time painting on the New Jersey coast, specifically at Sandy Hook and Long Branch. The next year, the artist returned to Europe. He visited London and Paris again with his close friends McEntee and McEntee’s wife. He then spent the summer visiting the Alps and Sicily before wintering in Rome with the McEntees, his sister Mary, Church and his wife.

In January 1869 Gifford embarked on a two-month excursion down the Nile in Egypt, visiting Alexandria and Cairo. He then travelled through the Middle East with a group of Americans, visiting Syria, Jerusalem, Samaria, Damascus, Greece, and Turkey. During his travels Gifford painted monuments such as the pyramids and the Colossi of Memnon; however, most of his paintings from this trip are Nile River scenes. Gifford returned to continental Europe via Beirut, Greece, Istanbul, Budapest and Vienna. He then spent six weeks in Venice over the summer before returning to the United States in September.

In 1870 Gifford took advantage of the newly connected railways to visit the Rocky Mountains with fellow artists Whittredge and Kensett. They accompanied a United States Geological party under Dr. Hayden in the exploration of Wyoming, Utah, and the Colorado territories. Gifford took a second trip west in the summer of 1873, visiting California, Oregon, British Columbia, and Alaska.

During the last decade of his life, Gifford continued to travel extensively around the northeastern region of America and into Canada. He married Mary Cecilia Canfield, an old school friend, in 1877. While on a fishing trip at Lake Superior in 1880 he contracted a respiratory ailment, returned to New York City, and died shortly after at age fifty-six on August 29. Gifford was eulogized at a memorial meeting of the National Academy of Design and buried in the Gifford family plot in Hudson, New York.

In November 1880 Gifford was posthumously honored with the Metropolitan Museum of Art’s first monographic retrospective in its new Central Park building. In 1881 the museum published the Memorial Catalogue of the Paintings of Sanford Robinson Gifford, N.A., which documents 735 of Gifford’s works. This tribute by the Metropolitan Museum was especially fitting as Gifford had been among one of fifty prominent New Yorkers to draft the museum’s original resolution for the municipal art institution.

Gifford’s paintings are held in the esteemed collections of the Museum of Fine Arts, Boston, Whitney Museum of American Art, Smithsonian American Art Museum, National Gallery of Art, and the Metropolitan Museum of Art.[2]

1823 Sanford Robinson Gifford is born in Greenfield, Saratoga County, New York, the fourth of eleven children to Elihu and Eliza Starbuck Gifford; as an infant moves with his family to Hudson, New York
1830 Attends school at the Hudson Academy until 1842
1842 Attends Brown University for two years
1845 Moves to New York City to study drawing, perspective and anatomy under English artist John Reubens Smith; takes a drawing trip through New York, Massachusetts, and Connecticut; visiting the Catskills and the Berkshires
1846 In the summer returns to the Catskills and the Berkshires; studies at the Antique School and at the National Academy of Design
1847 Has first painting, Lake Scene, on the Catskills (c.1846), exhibited at the National Academy of Design (submits his work almost annually hereafter); studies the human figure in anatomy classes at the Crosby Street Medical college; visits the Catskills in August
1848 In the summer travels through the Adirondack Mountains and returns to the Catskills
1849 Sketches with Henry Ary in the Catskills and travels on the Hudson River between Albany and Glens Falls
1850 Elected an associate of the National Academy; takes a trip to the White Mountains in New Hampshire, and to Milwaukee, Wisconsin
1851 Sketches in the Adirondack Mountains with Eliphalet Terry, Richard W. Hubbard, and his older brother Frederick
1852 Travels around Pennsylvania, also returns to Hudson and visits Philadelphia
1854 Elected a full academician of the National Academy; sketches in New Jersey and Maine, and visits an artists colony in Saco Valley, New Hampshire
1855 In summer sails to England, where in London he visits the National Gallery, Royal Academy of Art, and Society of Painters of Water Colors; takes summer sketching trips around England and Scotland before sailing to Paris
1856 Rents a studio in Rome where he paints Lake Nemi (1856–57; Toledo Museum of Art), his largest-known work
1857 During the spring meets fellow American artists Worthington Whittredge, William H. Beard and Albert Bierstadt; in May takes sketching trip with Bierstadt through southern Italy; ends his European tour with a visits to Innsbruck, Munich, Vienna, Prague, Dresden, Berlin, and Paris; returns to New York in September and rents a studio number 19 at the Tenth Street Studio Building where Bierstadt and Frederic Church are his neighbors (he retains this studio until his death)
1858 Travels to Vermont with painter Jerome Thompson
1861–63 During the Civil War serves in the Union Army with the Seventh Regiment of the New York Militia stationed in defense of Washington D.C.
1861 Brother Charles commits suicide at the war’s outbreak
1863 Brother Edward dies in conflict
1867 Spends the summer in New Jersey painting the coast at Sandy Hook and Long Branch; represents American art at the International Exposition in Paris with painting Hunter Mountain Twilight (1866; Terra Foundation of American Art) along with Winslow Homer’s Prisoners from the Front (1866; Metropolitan Museum of Art)
1868 Makes final journey to Europe with Jervis McEntee and his wife; spends the summer visiting the Alps and Sicily before wintering in Rome
1869 Travels to Egypt where he takes a two-month boat voyage from Cairo down the Nile River; travels to the Middle East with Alfred Craven via the Suez Canal, where his itinerary includes Syria, Jerusalem, Samaria, Damascus, Greece and Turkey
1870 After returning to America takes a trip to Colorado with Whittredge and Kensett
1872 Serves as a pallbearer at Kensett’s funeral
1873 Visits California, Oregon, British Columbia and Alaska
1877 Marries Mary Canfield, a widow
1880 While on a fishing trip at Lake Superior contracts a respiratory ailment, returns to New York City, and dies shortly after at age fifty-six; has the first monographic retrospective to be held at the Metropolitan Museum of Art
1881 The Metropolitan Museum of Art publishes A Memorial Catalogue of the Paintings of Sanford Robinson Gifford, N.A., which documents 735 of Gifford’s works

1. Sanford Robinson Gifford, “Frothingham Letter,” Archives of American Art; quoted in Kevin J. Avery and Kelly, Franklin, eds., Hudson River School Visions: The Landscapes of Sanford R. Gifford (New York: The Metropolitan Museum of Art, 2003), 6.
2. In 2008 Gifford’s painting Mount Mansfield, Vermont (1859; whereabouts unknown) and Frederic Edwin Church’s Scene on the Magdalene (1854; whereabouts unknown) were involved in controversy when the National Academy of New York deaccessioned them from its collection. They were sold to an unknown buyer for $13.5 million; money which the Academy needed to raise to cover operating expenses during America’s worst financial downturn since the Great Depression. The high price garnered by the sale reflects the ‘recession-proof’ performance of good Hudson River School works at auction, demonstrating how Gifford has become an invaluable part of American national heritage.