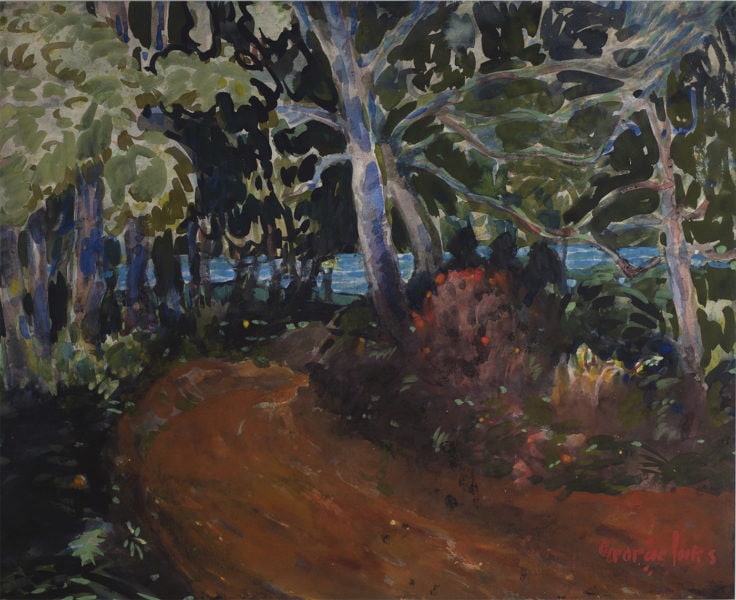 Road to the Water

A prominent member of the revolutionary Ashcan school, and specifically “The Eight,” George Luks would capture New York City life with a vigor and spontaneity that was unprecedented in American art. He is best remembered for his unconventional subjects and gritty, urban street scenes that conveyed the originality and independence of his artistic vision.

A prominent member of the revolutionary Ashcan school, and specifically “The Eight,” George Luks would capture New York City life with a vigor and spontaneity that was unprecedented in American art. He is best remembered for his unconventional subjects and gritty, urban street scenes that conveyed the originality and independence of his artistic vision.

Born in 1867 in the coal mining community of Williamsport, PA, Luks came from a well-to-do family of Eastern European origins. His father, Emil Charles Luks was a doctor and pharmacist who served the needs of the underprivileged and influenced his humanistic approach to art and empathy for the less fortunate. His mother, Bertha von Kraemer Luks was an amateur painter who noted and encouraged her son’s interest in drawing from a young age.[1] Luks’s remarkable artistic technique and ability is all the more impressive in the context of little formal academic training. In 1884 he registered at the Pennsylvania Academy of the Fine Arts and dropped out shortly thereafter due to his distaste for the Academy’s formal rules. He additionally traveled to Germany, England and France to attend several other art schools, including the Kunstacademie in Dusseldorf, where he also withdrew his enrollment. Luks was a rebellious student with irreverence for the established canons of the academicians that would continue throughout his life.

Like many of his Ashcan contemporaries, Luks began his career as a newspaper illustrator upon his return to the United States in 1890. In 1894, he began working for the Philadelphia Press and Philadelphia Evening Bulletin, creating images for news stories directly at the scene, and was also sent to Cuba in 1895 to document the resurrection. Luks was a strong draftsman with a quick, reportorial style and a meticulous eye for detail. Critics noted that his early style “reeked of the journalistic.”

It was in Philadelphia were he first met Robert Henri, Everett Shinn, John Sloan, and William Glackens. Known as the “Philadelphia Five,” Luks moved with the group to New York City in 1896. Luks continued his work as an illustrator for the New York World and gained instant notoriety for his “Yellow Kid” comic strip. In 1898, Luks began painting at the urging of Robert Henri, the Ashcan school’s leading member and instructor, and would soon produce some of the most visually arresting images of the 20th century.[2]

Luks was undoubtedly the most colorful and charismatic member of the Ashcan school. A heavy drinker and theatrical storyteller, his bold personality was very clearly reflected in his art. With New York City as a backdrop, Luks chronicled urban life in works that were rooted in quotidian experiences. He detested “pretty paintings” and deliberately sought out gritty, unrefined subject matter. He walked the bustling streets of Manhattan and particularly gravitated toward the Lower East Side, which was the site of the ethnic neighborhoods and slums of the city’s immigrant population. During this phase in American art, artists finally became free of academic restraints and felt free to respond to the urban environment as never before. As a consequence, Luks turned to real, contemporary issues that were reflected in the era’s pictorial journalism and photography but ignored in its art.[3] Of the Ashcan artists who were associated with urban realism, Luks was the greatest proponent of this artistic style. In his images of the city’s beggars, street urchins, and rag pickers, the art critic Elisabeth Cary acknowledged that his “most penetrating interpretations were given to figures of poverty, of depravity, of eccentricity.”[4]

The inspiration for Luks’ art was presaged by the works of the French graphic artist and caricaturist Honoré Daumier, who also made frequent social and political commentaries on modern life. Luks borrowed his gestural brushwork from the French Impressionists and would have likely been influenced by the works of Manet, Goya, Velazquez, and Rembrandt. He also painted in a style reminiscent of Frans Hals, the 17th century Dutch realist, and likened his genius to him when he pronounced: “There are only two great artists in the world – Frans Hals and little old George Luks!”[5] The Dutch artists’ loose, painterly brushwork and his ability to capture the expressive personalities and gestures of his figures is similarly echoed in Luks’s works.[6]

Although the European masters had a profound influence on Luks, he was most interested in the works of his American predecessors and contemporaries and was particularly contemptuous of the European art scene, which he termed a “foreign art racket.” Luks sought to revitalize the realist tradition of 19th century American realists Homer and Eakins into his own version of urban realism at the turn of the century. It was his ambition to paint “110% American,” and he was a firm believer in the potential of America’s artists.[7] His sentiments are best expressed in his famous exclamation: “Art! – my slats! … I can paint with a shoestring dipped in pitch and lard… Tell those bimbos from across the big pond that the future of art lies right here… Technique, did you say? My slats... Say listen, you – it’s in you or it isn’t! Who taught Shakespeare technique? Or Rembrandt? … Who taught John L. Sullivan how to fight? … Guts! Guts! Life! Life! That’s my technique.”[8]

Although the art of George Luks and the Ashcan artists often met criticism, their works were heralded for their originality and sincerity. One critic remarked: “They experiment, all art is ceaseless experimenting. They are often raw, crude, harsh. But they deal in actualities. They paint their present environment – the only real historical school, and they do this with modern technique.”[9] Luks particularly received acclaim for the immediacy, energy, and raw power of his works; what art critic James Gibbons Huneker termed as “dashes at reality and slices of life.”[10]

In an exit as dramatic as his life and art, Luks was found dead in his beloved New York City streets due to a bar brawl on October 29th, 1933.

George Luks’s contributions to the Ashcan school and American art are vast. The vibrancy and originality of his artistic vision, coupled with his natural talent, led to some of the most compelling and authentic images of city life at the turn of the century. He unknowingly laid the groundwork for urban realism and American scene painting in the 1920s and 30s and legitimized American art in an international art scene. His works can be found in many of the country’s leading museums, including the Metropolitan Museum of Art, the Whitney Museum of American Art, the Museum of Fine Arts, Boston, the Smithsonian American Art Museum, and the National Gallery of Art.

1867 Born in Williamsport, PA on August 31.
1884 Registered at the Pennsylvania Academy of the Fine Arts. Traveled to Europe.
1894 Began working for the Philadelphia Bulletin and Philadelphia Evening Press.
1895 Began serving as a war correspondent in Cuba.
1896 Moved with the “Philadelphia Five” to New York City. Secured position at the New York World where he became famous for his “Yellow Kid” comic strip.
1898 Began painting at the urging of Robert Henri.
1903 Exhibition at the Society of American Artists. First painting accepted into the National Academy of Design’s annual exhibition
1904 Exhibition at the National Arts Club of works by Luks and the Eight
1908 First exhibited at the Macbeth Gallery
1910 First solo show at the Macbeth Gallery
1911 Participated in the Independent Artist’s Exhibition, Union League Club of New York, and at the first meeting of the American Association of Painters and Sculptors.
1912 Moved out of downtown apartment to new locale in northern Manhattan.
1913 Exhibited at New York’s revolutionary Armory Show. Joined the Kraushaar Gallery for what would become a decade long relationship.
1916 Received Clark Gold Medal, Corcoran Gallery of Art
1918 Received Temple Gold Medal, Pennsylvania Academy of the Fine Arts
1919 Traveled to Nova Scotia, trip inspired a series of watercolors
1920 Taught briefly at the Art Students League. Moved back to downtown Manhattan.
1921 Participated in overseas exhibition of American paintings with other members of the Eight; exhibition organized by Gertrude Vanderbilt Whitney.
Phillips Collection founded; began to acquire Luk’s works
1925 Founded the George Luks School of Painting. Traveled back to Williamsport and Pottsville, PA for an art commission. Bought a farmhouse in the Berkshire Mountains.
1926 Received Frank G. Logan Award, Art Institute of Chicago
1930 Works were showcased in the Museum of Modern Art’s exhibition of painting and sculpture by living Americans. Invited to exhibit at the 29th Carnegie International.
1932 Received William A. Clark Prize, Corcoran Gallery of Art. Works were showcased at
The Museum of Modern Art’s exhibition “American Painting and Sculpture, 1862-1932.”
1933 Died on October 29th.
1934 Memorial exhibition held at the Newark Museum.
1937 The Whitney Museum of Art organized “New York Realists, 1900-1914” including Luks and the Eight.
1939 The Metropolitan Museum of Art organized “Life in America” at the 1939 World Fair – Luk’s Hester Street was shown
1943 Brooklyn Museum organized retrospective on Luks and the Eight
1945 Philadelphia Museum of Art organized “Artists of Philadelphia: William Glackens, George Luks, Everett Shinn, and John Sloan”
1997 Exhibition at Owen Galleries, NY
2007 Exhibition at the Frist Center for the Visual Arts, TN