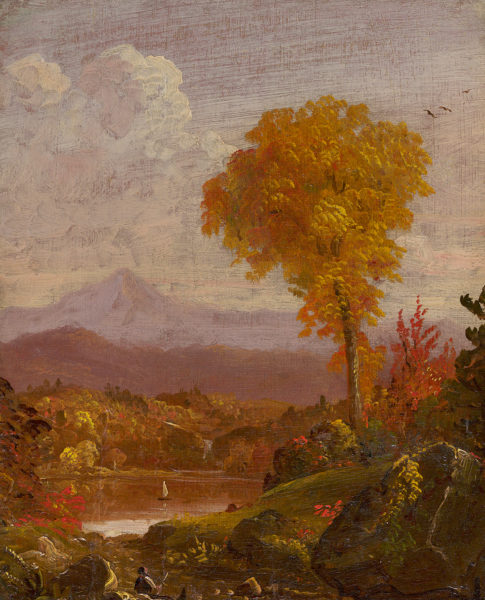 Reclining Figure in a Mountain Landscape

Thomas Cole was one of the original founders of American landscape painting. The artist was not only responsible for the establishment and development of the Hudson River School, but has also greatly influenced and defined the tradition of artistic expression in the United States.

Thomas Cole was one of the original founders of American landscape painting. The artist was not only responsible for the establishment and development of the Hudson River School, but has also greatly influenced and defined the tradition of artistic expression in the United States.

Thomas Cole was born on February 1, 1801 in Bolton-le-Moor in Lancashire, England. He was the seventh child of the woolen manufacturer James Cole and his wife Mary. The early years of his life were spent studying in Chester, apprenticing as an engraver of designs, and eventually an engraver’s assistant in Liverpool. In 1818, the Cole family followed many of their compatriots and immigrated to the United States in search of both wealth and adventure.

Although the Coles first settled in Philadelphia, Pennsylvania, it was not long before they decided to move to Steubenville, Ohio. The young Thomas Cole, however, stayed behind and boarded with a Quaker family who enjoyed his company and his musical ability on the flute.1 During this time Cole worked as a wood engraver and a textile print designer. The next year, 1819, Cole traveled to St. Eustatius in the Caribbean where he made some of his earliest artistic efforts, sketches of the mountainous landscape. By the end of summer, Cole had returned to Philadelphia before joining his family in Ohio where he assisted in his father’s wallpaper manufacturing business. Over the next few years, Cole began to develop his artistic career, advertised as an art teacher, learned the basics of portrait painting, toured Ohio looking for artistic commissions, and painted a number of theatre sets.2

In 1823, the young aspiring artist took his development to a new level by enrolling at the Pennsylvania Academy of Fine Arts in Philadelphia. The next year, Cole exhibited his first work, at the Pennsylvania Academy. He moved to New York City in 1825 and began his long relationship with and reverence for the Hudson River Valley. Cole produced some of his first completed landscapes on a trip up the Hudson River in the summer of 1825 and sold them to noted artists Asher B. Durand and John Trumbull.

The following year, Cole began his regular summer trips to Catskill, New York, where he would later come to reside, and was elected a founding member of the National Academy of Design, one of Americas earliest and most prominent artistic institutions.3 It was at this time that Cole also began to exhibit at the Academy as well as the American Academy of Fine Arts. In both 1826 and 1827, the painter continued to draw and paint throughout the mountainous regions of North America, including the White Mountains and the Adirondacks. In 1828 Cole completed and exhibited his The Garden of Eden (1828, Amon Carter Museum, Fort Worth, TX) and The Expulsion from the Garden (1828, Museum of Fine Arts, Boston) at the National Academy of Design, and again returned to the White Mountains. These paintings began a long tradition of the artist’s determination to combine a celebration of natural beauty and intense prosaic expression in art, with his strong religiosity and continual search for truth.4

In 1829, Thomas Cole returned to his birth country and met, in London, the prominent British painters, John Constable, Sir Thomas Laurence, and J.M.W. Turner. Following his stay in London, Cole continued to travel throughout Europe, to Paris, Florence, Naples, and Rome, completed a number of landscapes, and began work on The Angel Appearing to the Shepherds (1833, The Chrysler Museum, Norfolk, VA). In November 1832, he returned to the US and continued to paint in and around the New York area. In 1835, the artist wrote his “Lecture on American Scenery”, visited Schroon Lake in the Adirondacks, and worked on his series The Course of Empire (1836, New York Historical Society, New York)

By 1836, Cole had completed The Course of Empire, a grandiose series that captures the rise and fall of civilization in the most moving and magnificent manor. Underlying the series is an examination of the relationship between human expansion and natural preservation, a theme he would reproduce in The Oxbow. The Savage State begins the series with a representation of early humanity amongst an all-powerful nature. The Consummation of Empire highlights the peak of human civilization, while Destruction marks its demise. Both of these works likely borrow directly from J.M.W. Turner’s Decline of the Carthaginian Empire (1817, Tate Gallery, London), which Cole may have even discussed with the artist when meeting him in London seven years earlier.5 Finally, Desolation marks a moment beyond humanity when nature begins to reclaim what is rightfully hers. Given the progressive nature of Cole’s work and the precociousness of his career,, this serious of paintings can be considered the most ambitious artistic endeavor completed by a single American artist to that date.

View from Mount Holyoke, Northampton, Massachusetts, after a Thunderstorn (The Oxbow) (1836, The Metropolitan Museum of Art, New York), also completed in 1836, has been continually celebrated for its complexity and ability to both define and foreshadow the American ideal of Manifest Destiny. Additionally, The Oxbow’s panoramic form was ground-breaking for its perspective of the lofty subject, overlooking an expansive combination of two individual vistas. 6 It was this type of work that would later inspire and embody Hudson River School painters like Asher B. Durand, Frederic Edwin Church, Albert Bierstadt, and Thomas Moran.

Also in 1836, Thomas Cole married Maria Bartow and the couple moved permanently to Catskill, NY. Two years later Cole showed his diversity in artistic merit by winning third prize in an architectural competition for the Ohio State Capitol. In 1939, the near-infamous painter was commissioned to paint The Voyage of Life (1839, Munson-Williams-Proctor Institute, Utica, NY). For the year spanning 1841-1842, Cole again traveled to Europe, this time visiting London, Paris, Rome, and Sicily, where he painted a second set of The Voyage of Life. Upon his return to the US, Cole exhibited his second The Voyage of Life in New York and Boston.

The Voyage of Life represents a culmination of Thomas Cole’s abilities of poetic adaptation to painting, mastery of the natural world, and a deep reference for religion. This series of paintings are meant to provide an allegorical message of eternal salvation through the portrayal of a pilgrim’s passage through life.7 The series includes Childhood, Youth, Manhood, and Old Age.

In 1844, Cole traveled to Mt. Desert Island, ME with his first student Frederic Edwin Church and was later baptized in the Episcopalian Church. Church would become one of the most well-respected and prominent members of the Hudson River School, painting landscapes that have been revered for similar qualities as Thomas Cole’s, and are held by the Metropolitan Museum of Art and the National Gallery of Art, among others prominent institutions. In 1847, Cole visited Niagara Falls and continued to paint and exhibit, including Prometheus Bound (private collection) at the N-York Gallery of the Fine Arts. On February 8, 1848, Thomas Cole passed away at his home in Catskill, NY after suffering from serious illness. His funeral was held a few months later at the National Academy of Design, with William Cullen Bryant as the main speaker. In May of that year, the American Art-Union held a retrospective of the artist’s work.

The paintings of Thomas Cole have been revered for their truthful depiction of natural majesty and their poetic qualities.. While the artist was commended for depicting nature, he was highly celebrated for his ability to portray intensely religiously subjects. Cole has been highly influential on the artistic careers of not only his direct artistic decedents, the Hudson River School, but also indirectly on a many of America’s most well-known artists. Today his works are included in the most prestigious institutional collections in the country, including the the Corcoran Gallery of Art, Metropolitan Museum of Art, the National Gallery of Art, the Museum of Fine Arts, Boston, as well as internationally in the Louvre, Paris. Additionally his paintings remain highly coveted in today’s art market.

1801 Cole is born on February 1 in Bolton-le-Moor, Lancashire, England to a wool manufacturer.
c. 1815 Works as a design engraver for a print works and an engraver in Liverpool, England
1818 Moves with family to Philadelphia, Pennsylvania, works as a wood engraver, family moves to Steubenville, Ohio, Cole remains in Philadelphia
1819 Travels to St. Eustatius, West Indies
1820-23 Continues wood engraving in Ohio, begins work as travelling painter, family moves to Pittsburgh, PA, Cole paints theater sets in Ohio
1823 Moves to Philadelphia, studies at the Pennsylvania Academy of Fine Arts, paints landscapes and ornaments Japan ware, writes poetry
1825 Moves to New York City, takes studio in father’s home, sells a number of landscapes and begins sketching trips up the Hudson, paints a number of landscapes and sells them to John Trumbull, William Dunlap, and Asher B. Durand
1826 Begins to spend summer in Catskill, NY, elected a founding member of the National Academy of Design, where he also exhibits, exhibits at the American Academy of Fine Arts, travels through the Catskills and Adirondacks
1827 Works in the White Mountains
1828 Exhibits The Garden of Eden and The Expulsion from the Garden at the National Academy of Design, returns to the White Mountains
1829 Visits Niagara Falls before traveling to London in the summer, meets John Constable, Sir Thomas Laurence, and J.M.W. Turner
1831-32 Visits Paris, Florence, Naples, and Rome, completes a number of landscapes, begins The Angel Appearing to the Shepherds
1833 Meets patron Luman Reed, who commissions a landscape
1835 Writes “Lecture on American Scenery”, Visits Schroon Lake, Adirondacks, continues The Course of Empire
1836 Exhibits The Course of Empire, marries Maria Bartow and moves permanently to Catskill
1838 Enters design contest for the Ohio State Capitol, wins third prize
1839 Receives commission for The Voyage of Life, visits White Mountains and western New York
1841-42 Again travels to Europe, visits London, Paris, Rome, and Sicily, paints second set of The Voyage of Life, returns to the US and joins Episcopal Church
1843 Exhibits second The Voyage of Life in New York and Boston, MA
1844 Travels to Mt. Desert Island, ME with his first student Frederic Edwin Church
1847 Visits Niagara Falls, exhibits Prometheus
1848 Dies February 8, William Cullen Bryant speaks at funeral at the National Academy of Design on May 4, retrospective at the American Art-Union