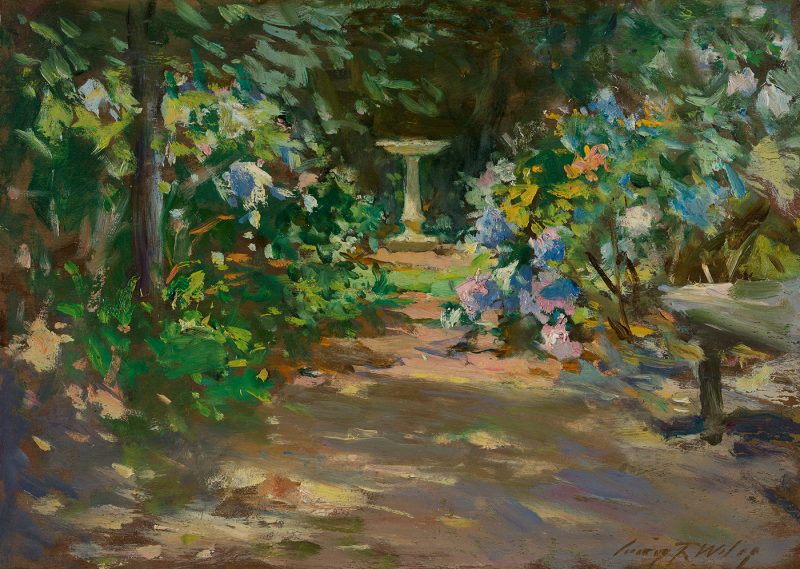 Pathway in the Garden

Pathway in the Garden

A master of both portraiture and landscape painting, Irving Ramsay Wiles used an expressive palette and brushwork in the impressionist tradition.

Irving Ramsay Wiles was destined to become an artist; his father Lemuel Maynard Wiles was a landscape painter who studied under William M. Hart and Jasper Francis Cropsey. Shortly after Irving’s birth in Utica, New York, the Wiles family moved to New York City in order for

A master of both portraiture and landscape painting, Irving Ramsay Wiles used an expressive palette and brushwork in the impressionist tradition.

Irving Ramsay Wiles was destined to become an artist; his father Lemuel Maynard Wiles was a landscape painter who studied under William M. Hart and Jasper Francis Cropsey. Shortly after Irving’s birth in Utica, New York, the Wiles family moved to New York City in order for Lemuel to pursue his career. It was in his father’s studio that Irving received his first artistic lessons as a child. While later studies at the Sedgwick Institute in Great Barrington, Massachusetts were meant to prepare him for a career in medicine, Wiles followed in his father’s footsteps to become one of America’s great painters and instructors.

Wiles’s formal study of art began at the Art Students League in 1879 under Thomas Wilmer Dewing, James Carroll Beckwith, and William Merritt Chase. During the winter of 1882, Wiles shared a studio in the Tenth Street Studio Building which granted him access to Chase who also maintained a studio there; Chase later became a major influence on the young artist and the two formed a close friendship. The fresh faculty at the Art Students League represented a shift in American art toward a more cosmopolitan and progressive style, one which Wiles would not only absorb but adapt and master by pairing his skillful drawing abilities with his dynamic brushwork. His style was refined during his time in Paris, which began in 1882. He entered the Académie Julian where he studied under renowned instructors Jules Joseph Lefebvre and Gustave Rudolph Boulanger, and later took private lessons with Carolus-Duran, famous in the States as the teacher of John Singer Sargent. Carolus-Duran taught his students that in all great paintings the artists have “interpreted nature, and not given a literal translation.”[1] The success of Wiles’s training was recognized by the Paris Salon in 1883 when they accepted two of his works for exhibition.

In 1884, Wiles returned to New York, no longer as a student but as a professional artist, and took a studio at 52 East 23rd Street. He began illustrating for the popular magazine The Century, which led to jobs with Harper’s and Scribner’s. He continued this commercial work for the next decade to support himself and his new wife, Mary “May” Lee, whom he married in 1887. Between 1884 and 1894, during summers spent teaching at his father’s Silver Lake Art School in upstate New York, May frequently served as his model, posing with musical instruments or in exotic costume in his studio, and in sunlit, rural settings. His works of this period reflected a heavy French influence as he chose to model his wife and the other female students at Silver Lake as fashionable women; critics at the time compared him to French society painter James Tissot. Wiles’s plein-air landscapes further possessed a highly impressionist style with dabs of heightened color used to depict light and atmosphere. His career progressed rapidly and in the 1890s he was known as one of America’s best portrait and figure painters.

Following the exhibition of his portrait of actress Miss Julia Marlowe, 1901 (National Gallery of Art, Washington, D.C.) at the National Academy in 1902 to rave reviews, Wiles was one of the most highly sought-after figure painters in New York. He became recognized not only for his technical skill but also for his ability to express the individuality of his sitters. In 1910, he had his first solo exhibition, featuring sixteen of his portraits, at M. Knoedler & Co. in New York. The success of the show created an ongoing relationship between Wiles and Knoedler in which Knoedler acted as his agent in attaining portrait commissions. He went on to paint such esteemed men as John J. Pierrepont in 1912, and President Theodore Roosevelt and William Jennings Bryan, both in 1916.

While Wiles was excelling in portraiture and enjoying increasing prices for his work, he never left his plein-air painting behind. After his father closed the Silver Lake Art School in 1894, Lemuel and Irving began teaching summer courses on the North Fork of Long Island nearby Chase’s home and school at Shinnecock. In 1898, Wiles bought a waterfront cottage, “The Mooring,” in Peconic and built a studio on the grounds. Wiles and his family spent every summer there so that he could paint the coast, sea, and gardens, and he eventually retired to “The Mooring” full-time. Although he made many small-scale studies, he did complete some large canvases in the area and exhibited them with success: in 1931, Quiet Waters (private collection) won the National Academy’s Palmer Prize for best marine painting. Wiles was known to easily befriend the local farmers and fisherman, a quality admired by his neighbors, and regularly hosted other New York artists such as Henry and Edith Prellwitz, forming what was known as the Peconic art colony. Nelson C. White wrote, “he was esteemed and valued not only as an artist but also as a man.”[2] Wiles died in his beloved Long Island home in 1943. He never experimented with the modernist movement, which by that time was well established in the States especially in New York, yet faithfully upheld the impressionist qualities he had learned in Paris and from his mentor Chase.

1861 Born April 8 in Utica, New York to landscape painter Lemuel Maynard Wiles
1862 The Wiles family moves to New York City
1879 Studies at the Art Students League in New York under J.C. Beckwith
1881 Opens his first studio in New York City
1882 In winter shares a studio with portrait painter Alban Jasper Conant in the Tenth Street Studio Building; goes to Paris to study with Boulanger and Carolus-Duran
1883 Exhibits two watercolors at the Paris Salon
1884 Returns to New York and takes a studio at 52 East 23rd Street; does illustrations for The Century, Harper’s, and Scribner’s magazines; teaches at Cosmopolitan Art School in New York City
1885 Moves his studio to 106 West 55th Street; begins teaching at the Art Students League and the Chase School
1886 Exhibits at the National Academy of Design and receives the Hallgarten Prize
1887 Marries Mary Lee and opens a new studio to teach at 103 West 55th Street
1888 Participates in the University of Berlin’s American Art in Berlin exhibition
1889 Elected Associate member of the National Academy of Design
1898 Purchases a cottage in Peconic on Long Island, New York
1904–5 Travels with illustrator friend William T. Smedley to Holland and then onto Spain where he makes copies from Frans Hals and Diego Velázquez
1905 Serves as juror for exhibitions at the Society of American Artists and National Academy of Design
1907 Serves as juror for exhibit at the Carnegie Institute
1908–35 Has a studio at the artists co-op at 130 West 57th Street, Childe Hassam’s studio is across the hall
1910 First solo exhibition at Knoedler Gallery which displays his portraits
1910–12 Travels to Italy and then onto England, his daughter Gladys accompanies him as a student
1916 Second solo exhibition at Knoedler Gallery; William Merritt Chase dies and his family commissions Wiles to complete his Mrs. W. M. Chase and R. D. Chase (location unknown)
1928 An article on Wiles titled “Painter of Youth and Beauty” is printed in The Mentor
1948 Dies July 29