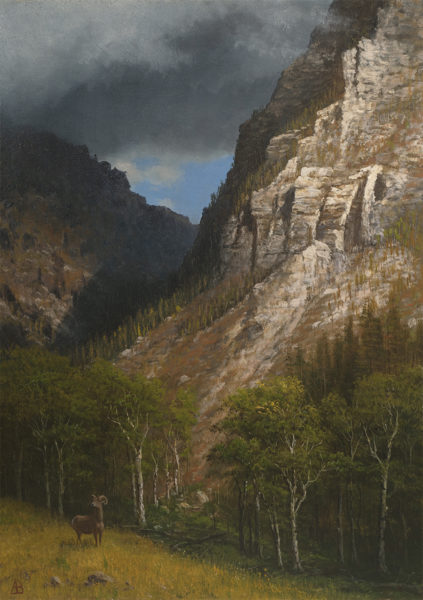 Pass into the Rockies

Note: Bierstadt first glimpsed the Rocky Mountains in 1859, which left a strong impression on him. He wrote: “The mountains are very fine; as seen from the plains, they resemble very much the Bernese Alps.…We see many spots in the scenery that remind us of our New Hampshire and Catskill hills, but when we look up and measure the mighty perpendicular cliffs that rise hundreds of feet aloft, all capped with snow, we then realize that we are among a different class of mountains; and especially when we see the antelope stop to look at us.”[1]

Diane Disney Miller (1933–2013) was the daughter of Walt Disney (1901–1966) and founder of the Walt Disney Family Museum. Together with her husband Ron they collected art, engaged in philanthropy, and supported her father’s legacy.