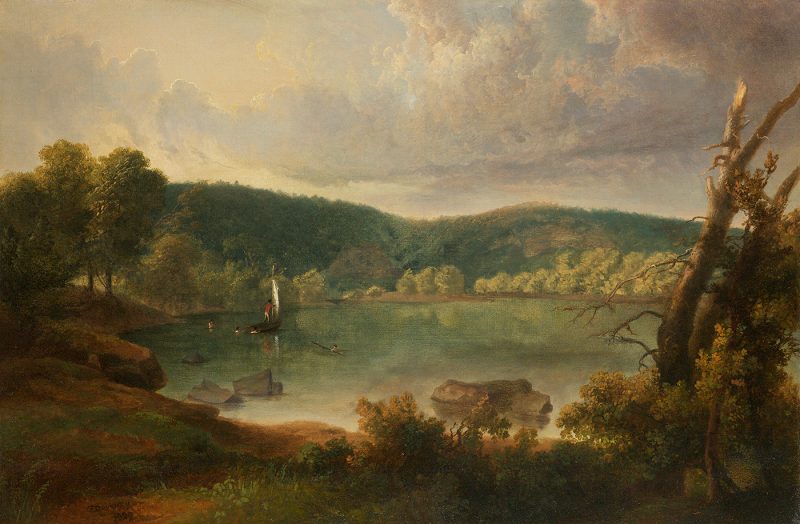 The paintings of Thomas Doughty represent America’s earliest tradition of landscape painting. His intense admiration for nature resulted in painterly depictions of the utmost truthfulness. The popularity of this new development facilitated the advancement of the landscape painting tradition in the United States, paving the way for future masters such as Thomas Cole and Frederic Edwin Church.

The paintings of Thomas Doughty represent America’s earliest tradition of landscape painting. His intense admiration for nature resulted in painterly depictions of the utmost truthfulness. The popularity of this new development facilitated the advancement of the landscape painting tradition in the United States, paving the way for future masters such as Thomas Cole and Frederic Edwin Church.

Thomas Doughty was born on July 19, 1791 in Philadelphia, Pennsylvania to the local ship carpenter James Doughty. The young Thomas Doughty was locally educated and became a leather worker, before utilizing his largely self-taught skills as an artist. Doughty’s older brother, a ship designer, notably of the frigates Constitution and President, was instrumental in encouraging his younger brother towards art. By 1814, Doughty was working as a leather currier in Philadelphia, and just two years later he was registered as a painter at 16 Pennsylvania Avenue, Philadelphia. In this same year, Doughty exhibited for the first time at the Pennsylvania Academy of the Fine Arts.

At this stage in his career, Doughty sought to improve upon his artistic skills by painting from Old Masters including Jan Van Goyen, Gaspard Poussin, and Nicholas Poussin. By 1824, his commitment to art in Philadelphia paid off when he was elected to the Pennsylvania Academy of the Fine Arts as an Academician. A year later, Doughty received another honor, this time in the form of a recommendation from Rembrandt Peale to Thomas Jefferson for the position of art instructor at the University of Virginia.1 It was also at this time that the young artist met and befriended Thomas Sully, with whom he would travel during the mid 1820s on numerous trips along the Schuylkill River. Doughty continued to be an avid outdoorsman throughout his life; this is visible in his impressively detailed paintings which remain loyal to nature.

For the two years following 1826, Doughty lived with the engraver Cephas Childs, near the home of Joshua Shaw and the art store of Samuel Scarlett, where he purchased most of his supplies.2 The next year, two works by Doughty were included in an exhibition onboard the Hudson River steamboat Albany, which was planned in an effort to differentiate the steamboat from its other competitors and included works by Thomas Birch, Thomas Cole, and Thomas Sully.3 In 1828 Doughty, among other prominent artists, signed the Memorial of the Artists of Philadelphia, a petition of complaints aimed at the Pennsylvania Academy. Possibly due to this strained relationship, the young artist moved to Boston, Massachusetts in 1829 and successfully exhibited nineteen works at the Boston Athenaeum.

However, Doughty did not remain in Boston long, returning to Philadelphia in 1830 to begin work on The Cabinet of Natural History and American Rural Sports with his brother. The volume contained historical accounts of the flora and fauna of North America, including detailed illustrations in color lithographs, which reveal Doughty’s ability to render significant natural detail.4 In 1832, Doughty returned to Boston, where he would remain for the next five years. These years proved to be his most productive and lucrative, including various sketching trips to the White Mountains, New Hampshire, the Catskill Mountains, New York, and along the coasts of Massachusetts and Maine. Two of his most exemplary paintings, Fanciful Landscape (1834, National Gallery of Art, Washington, DC) and In Nature’s Wonderland (1835, The Detroit Institute of Arts, Detroit), are a result of this period. Doughty also began to advertise in Boston as a painting instructor.

In 1837, Doughty traveled with his family to London, staying at 4 Grafton Street, Fitzroy Square. During his one year in England, he exhibited at the British Institution and the Society of British Artists. During this stay, the committed American landscape painter often socialized with Thomas Sully and with John James Audubon.5 Unfortunately, it was also at this time that Doughty began his continued bouts with illness, which often kept him from completing his work.

In 1838, he returned to America, this time to New York City. Upon his return, Doughty’s work was much influenced by his experience in London and included landscapes that were more painterly, containing a darker palette, and more stress on tone rather then color.6 The landscapist began to regularly spend his summers at Fishkill Landing, modern day Beacon, New York, and at Newburgh on the Hudson River. In these later years, Doughty exhibited works at the Apollo Association, American Art Union, and the National Academy of Design. During the early 1840s, Doughty traveled extensively; painting in Albany, NY, visiting his brother in Washington, DC, and New Orleans, LA.

In 1845, Doughty returned to London, lived at 3 Park Place, Regent’s Park, and exhibited paintings of English scenery, including scenes of Windsor castle. In 1846, he traveled to Paris and sketched from paintings in the Louvre. The following year, he returned to New York where, like many other painters of his time, he spent the winter in the city and the summers traveling. Doughty continued to experience public praise for his truthfulness to nature in his devoted landscape paintings, including in The Nickerbocker.7 Unfortunately, Doughty continued to suffer from poor health and in 1851, in an effort to deter critics, wrote in the Home Journal that he would prefer not to paint at all rather then paint poor pictures or “pot boilers”.8

Aiming to recover from his illness and instill new fervency to his artistic production, Doughty moved in 1852 to Oswego, NY and began to paint more regularly. It was during this time that he began work on a series of the four seasons, which he unfortunately never completed. By 1853, he had again returned to New York City, where he lived for the remainder of his life, until passing away on July 24, 1856 due to “a softening of the brain”.9

Thomas Doughty was America’s pioneer landscape painter. His illuminating works were celebrated during their time for their incredible truthfulness to the natural world, and remain widely appreciated today. It was Doughty’s great affection and compassion for nature that was responsible for this stylistic commitment to realistic depictions. As a result, his paintings embodied pastoral America, and popularized the genre of landscape painting for many artists to follow. Today, while rare, Doughty’s paintings are held up in many national institutions for their importance to the early development of landscape painting in America.

1791 Born on July 19th in Philadelphia, Pennsylvania to James Doughty, a ship carpenter
1808-09 Apprentice as a leather worker
1814 Working in Philadelphia as a ‘currier’ with his brother,
1816 Registered as a painter at 16 Pennsylvania Avenue, Philadelphia, PA
1818-19 Again registered as a leather currier in Philadelphia
1824 Elected Pennsylvania Academician, Pennsylvania Academy of the Fine Arts
1825 Recommended by Rembrandt Peale to Thomas Jefferson for a position as art instructor at the University of Virginia
Mid 1820s Travels with Thomas Sully along the Schuylkill River
1826-28 Lives with Cephas Childs, engraver, at 45 Sansom Street, Philadelphia, near the residence of Joshua Shaw and art store of Samuel Scarlett
1827 Works exhibited on the Hudson River steamboat Albany
1828 Signs a petition, Memorial of the Artists of Philadelphia, that stated complaints by local artists against the new Pennsylvania Academy of Fine Arts
1829 Moves to Boston, Massachusetts, exhibits nineteen works at the Boston Athenaeum
1830 Returns to Philadelphia, edits The Cabinet of Natural History and American Rural Sports with brother John Doughty
1832-37 Returns to Boston, takes sketching trips to the White Mountains, New Hampshire, the Catskill Mountains, New York, and along the coasts of Massachusetts and Maine, paints Fanciful Landscape (1834, National Gallery of Art, Washington, DC) and In Nature’s Wonderland (1835, The Detroit Institute of Arts, Detroit)
1837 Travels to London with family, lives at 4 Grafton Street, Fitzroy Square, exhibits with British Institution, Society of British Artists
1838 Returns to New York, NY
1841 Paints in Albany, NY
1842 Visits brother, Colonel William Doughty in Washington, DC
1844 Travels to New Orleans
1845-47 Travels abroad to London and Paris, exhibits paintings of English scenery
1848 Returns to New York
1850-51 Rents home in Hoboken, New Jersey, in poor health
1852 Moves with family to Oswego, NY on the banks of the Susquehanna River, recovering
1853-56 Returns to New York, paints very little, Thomas Doughty dies on July 24, 1856 at the age of sixty-three