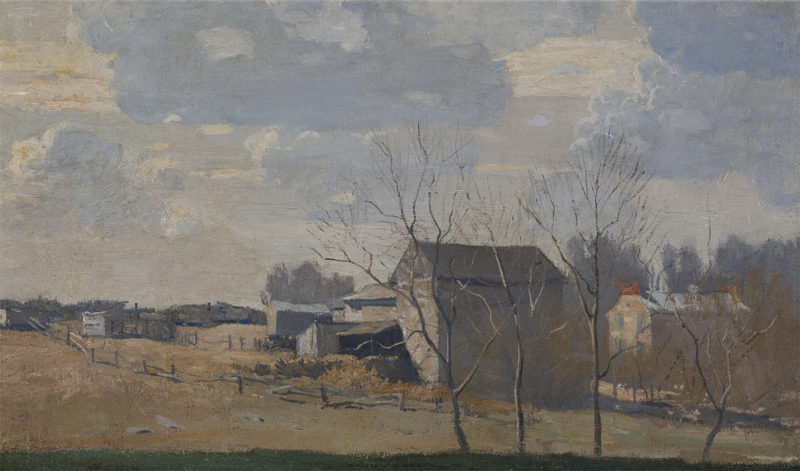 Private collection, Florida, from above

Memorial Art Gallery of the University of Rochester, New York, An Exhibition of Paintings, Pastels, and Etchings by Childe Hassam; Paintings by Van Dearing Perrine; Paintings by the New Hope Group of Painters, November 1916, cat. 97 (as Old Benedick Place)

A. V. Manning Sons Company, Trenton, New Jersey, Exhibition of Paintings by the New Hope Group of Painters, May 1917

Note: This work was painted near Manayunk, Pennsylvania. Garber also completed one charcoal work in that area (dimensions and location unknown).[1]

Daniel Garber was born in 1880 to a Mennonite family in North Manchester, Indiana. He began his formal studies at the Art Academy of Cincinnati in 1897. In 1899 he enrolled at the Pennsylvania Academy of the Fine Arts and was taught by William Merritt Chase, a leading figure in the American Impressionist movement. Under the tutelage of Hugh Breckenridge and Thomas Anshutz, the young Garber experimented with his approach to painting outdoor scenes during the two summers he studied at the Darby Art School in Fort Washington, Pennsylvania. Like many American artists working around the turn of the twentieth century, Garber traveled to Europe to complete his studies and was directly exposed to French Impressionism. After studying for two years in Europe, he returned to the United States in 1907 and settled with his wife Mary in Pennsylvania.

Garber set up a studio in the town of Lumberville, north of New Hope in Bucks County, a region that attracted many artists working in the American Impressionist landscape tradition. Garber joined the New Hope art colony and along with Edward Redfield, the first of the New Hope artists, established one of the top schools of academic Impressionism in the country. Garber rose to prominence as one of the most talented artists among them, earning critical praise for his paintings, mainly painted en plein air, of quarries, rivers, forests and fields around the Delaware River Valley. He was the most technically advanced of the Bucks County painters and certainly the most diverse in his subject matter. In addition to his outdoor scenes, Garber showed a remarkable ability in rendering figures, mainly his wife and children at their home in Lumberville. He also mastered a variety of media. In addition to his paintings, Garber made many drawings that are cohesive works in their own right and created a solid body of etchings.

Garber retained much of the style of the more traditional Impressionists such as J. Alden Weir, one of his chief influences; however, his paintings reflect a highly personal style. The treatment of his subjects varies from straightforward representation to a more imaginative handling of light and color. This effect has been described as decorative, a preference Garber shared with some of his contemporaries. Nevertheless, his overall body of work is characterized by a calmly poetic aura. The critic Homer St. Gaudens, whose views were generally reflective of broader public taste at the time, stated that “Garber does not paint a sugary picture, but a picture that is fortunate to contemplate.” It could be said that his paintings parallel the peaceful and meditative mood that pervaded the many years he spent living and working in the New Hope region.

Garber was a revered teacher at the Pennsylvania Academy of the Fine Arts, a position he held from 1909-1950. He also took on the role of an instructor among the New Hope colony members. In both capacities he was committed to maintaining the highest standards of European and American Impressionism. Through his direct instruction, and the influence of his paintings themselves, Garber helped to form the distinctly American Pennsylvania Impressionist style.

National Academy of Design
American Institute of Arts and Letters