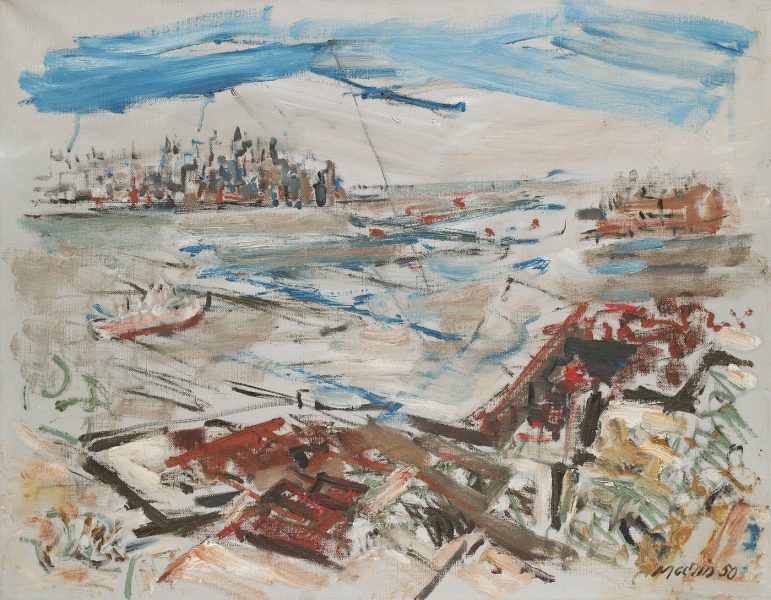 Celebrated painter; considered one of the greatest early American modernists

John Marin, noted for his bold watercolor paintings of Manhattan structures and Maine coastal scenes, was one of the influential group of modern artists promoted by Alfred Stieglitz in the early twentieth century.

Celebrated painter; considered one of the greatest early American modernists

John Marin, noted for his bold watercolor paintings of Manhattan structures and Maine coastal scenes, was one of the influential group of modern artists promoted by Alfred Stieglitz in the early twentieth century.

John Marin belonged to the group of early twentieth century modernists who exhibited frequently at Alfred Stieglitz’s famous New York galleries. Among other American artists promoted by Stieglitz—Georgia O'Keeffe, Arthur Dove, and Marsden Hartley—Marin was an integral player in New York’s rise to prominence as an epicenter of the artistic avant-garde.

Marin studied architecture at Stevens Institute of Technology in Hoboken, New Jersey and worked for a short time as an architect until 1893 when he quit his practice to pursue a career as a painter. He began his fine art studies at the Pennsylvania Academy of Fine Art (1899-01) where he was taught by Thomas P. Anshutz and William Merritt Chase. He later attended the Arts Students League (1902-3) and the Académie Julian in Paris (1905). From 1905 to 1910, while residing in Paris, Marin devoted himself to producing etchings that would eventually constitute a body of 103 plates. As fodder for his imagery, Marin drew on the visual information he gained through his extensive travels to cities throughout Western Europe. It was a period of intense exploration as Marin developed the refined drawing skills gained through his architectural training into his characteristically bold lines and rich surfaces.

While in his mid-30s, Marin’s artistic career gained momentum after meeting Alfred Stieglitz in Paris and later exhibiting at Stieglitz’s gallery “291” in 1909. In 1913 he exhibited at the now legendary Armory Show where he was greatly impacted by the works of the Post-Impressionists and German Expressionists. By 1911, he had returned to the Unites States permanently and took on various architectural landmarks in New York City as his subjects: the Municipal Building, St. Paul’s Cathedral, the Woolworth Building and the Brooklyn Bridge. Rather than depicting the structures through accurate representation, Marin’s aim was to capture the dynamism and rhythms of the city, particularly the tensions or opposing “weights” that he felt existed all around him: “There will be all sorts of movement and rhythm beats, one-two-three, two-two-three, three-one-one, all sorts, all seen and expressed in color weights.” Marin’s images from this era are distinctly modernist in their expressiveness, and by the late 1920s a strong influence of European modernism, particularly Cubism, began to manifest in his work.

For most of his life, Marin lived in Cliffside, New Jersey and spent his summers in Maine. In Small Point and later Stonington and Deer Isle, Marin produced seascapes and landscapes based on his direct observation. In many of his compositions he employed a kind of frame within a frame technique that was likely derived from James Abbot McNeil Whistler whose work greatly influenced Marin at various points in his career. The enclosed frame, or loosely defined geometric shape, often resulted in increased abstraction, reflecting the artist’s tendency to represent a scene the way it feels rather than appears.

Though he is remembered mainly for his works in watercolor, through which he lent a substantial air to the medium, Marin painted frequently with oil beginning in 1930. In his later oil works, Marin continued to paint in methods more typically used with watercolor, dragging a dry brush across a canvas to create translucent washes and leaving parts of the canvas bare.

Marin’s work attracted critical acclaim throughout his life, and the retrospectives of his work, the first at Daniel Gallery in 1920, brought him widespread fame. He is one of the first American artists to have a retrospective at the Museum of Modern Art (1936).

Associate member of the National Academy of Design