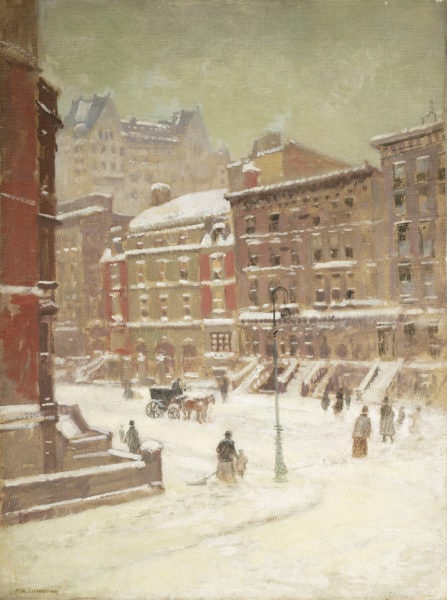 Paul Cornoyer was born in St. Louis, Missouri in 1864 and enrolled at the St. Louis School of Fine Arts in 1881. Early in his career, Cornoyer worked in the Barbizon mode. He first exhibited his paintings in 1887, and in 1889 he moved to Paris to further his art

Paul Cornoyer was born in St. Louis, Missouri in 1864 and enrolled at the St. Louis School of Fine Arts in 1881. Early in his career, Cornoyer worked in the Barbizon mode. He first exhibited his paintings in 1887, and in 1889 he moved to Paris to further his art education while continuing to show his work. He studied at the Académie Julian with Jules Joseph Lefebvre, Jean-Joseph Benjamin-Constant, and Louis Blanc. In the 1890s, Cornoyer’s style transitioned towards Impressionism and tonalism in his landscape and cityscape depictions.

Cornoyer returned to St. Louis from Paris in 1894 and soon attracted the attention of William Merritt Chase. The renowned artist acquired one of Cornoyer’s paintings, likely a depiction of Paris that was shown at the Pennsylvania Academy of the Fine Arts annual exhibition of 1896–97. Due to the encouragement of Chase, Cornoyer relocated to New York City in 1899 and embarked on the period of his career that would generate his most significant work.[1]

In New York, Cornoyer worked in a predominantly tonalist style, creating city and street scenes that received praise from critics and won awards. He favored rainy and snowy views of Washington Square Park, Madison Square Park, and Fifth Avenue, rendered in subtle grayed tones. Contemporaries observed that rather than conveying urban chaos, Cornoyer preferred images of calm amidst the bustle of the city. The poetic nature of his work and his sensitivity to atmosphere and color were duly noted.[2] For instance, in 1905 a critic wrote:

Paul Cornoyer may be classed among the very few who, with Raffaёlli, Cooper, Childe Hassam, Needham and some Englishmen, see beauty in the stone and brick house fronts. His pictures generally are taken from city life and have a keen appreciation of the picturesque, full of out-of-doors feeling, and with all the subtleties of light and weather convincingly portrayed. His touch is spirited, which lends itself admirably to his street scenes. Cornoyer has only recently settled in New York, but received at once recognition by exhibition prizes.[3]

In addition to developing his own body of work, Cornoyer also taught painting for much of his career. He began teaching in 1895 at the Mechanics’ Institute in New York City, as well as in Massachusetts and Connecticut during the summers.

Cornoyer belonged to esteemed artists’ groups and exhibited at prestigious institutions over the course of his career. In 1902, he joined the Salmagundi Club and won prizes at their exhibitions throughout the first decade of the twentieth century. He also became an associate member of the National Academy of Design in 1909. Cornoyer’s work has been featured in museums such as the Pennsylvania Academy of the Fine Arts, The Art Institute of Chicago, and Corcoran Gallery of Art.

In 1917, Cornoyer moved to East Gloucester, Massachusetts and continued to paint and exhibit his work regularly until his death in 1923. His work currently resides in collections including the Dallas Museum of Art, Newark Museum, Saint Louis Art Museum, and others.