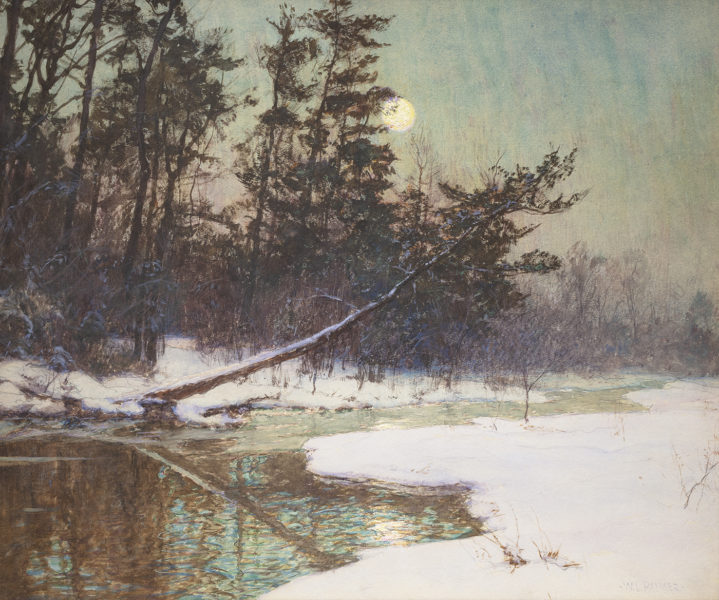 Moonrise Over a Snowy Landscape

The son of sculptor Erastus Dow Palmer, Walter Launt Palmer was born in 1854 in Albany, New York. During his youth, he was immersed in a steady stream of artists visiting the Palmer family home and spent time in the presence of Frederic Edwin Church, John Frederick Kensett, and Jervis

The son of sculptor Erastus Dow Palmer, Walter Launt Palmer was born in 1854 in Albany, New York. During his youth, he was immersed in a steady stream of artists visiting the Palmer family home and spent time in the presence of Frederic Edwin Church, John Frederick Kensett, and Jervis McEntee. At the age of sixteen, Palmer developed an early interest in painting led him to pursue formal training under the instruction of Church; after one year, Church remarked, “…Wallie is the coming man so far as I can see and I would like to be of use to him before he gets so far advanced as to not require my aid.”(1) Palmer’s rapid progress as a painter was confirmed in 1872 when his submission to the National Academy of Design, Mountain Pastures, was accepted for exhibition.

During a trip abroad with his family in 1873, Palmer visited the studios of expatriate artists throughout Italy and France, including John Singer Sargent. It was during this trip that Palmer first visited Venice—he was captivated by the glimmering canal waters and Italian architecture, which were subjects he repeatedly returned to throughout his career. While in France, Palmer enrolled at the atelier of French portrait painter Emile Auguste Carolus-Duran, which he later returned to resume his studies in 1877. The influence of Carolus-Duran’s teachings is seen in the tight, academic style of Palmer’s early work. When he returned to New York City, Palmer rented a studio in the famous West Tenth Street studio building, which he was sharing with Church by 1878. It was around this time that Palmer began painting interior scenes; however, his concentrated attention to detail—a quality that earned high praise from critics—caused significant strain on Palmer’s already poor eyesight. Suffering from a severely crossed eye since his youth, Palmer made the decision to surgically correct the condition in 1879.(2)

He frequently attended events of New York City’s art world, taking in theater performances and attending, and hosting, studio parties, where he became friends with William Merritt Chase and Jervis McEntee. After Palmer and Church gave up their studio in 1881, Palmer left New York City and went abroad again, passing two months painting in Venice and spending the remainder of his time in Europe in the company of John Henry Twachtman, Robert Frederick Blum, Frank Duveneck, and Chase. During this trip, the work he created demonstrated a newfound use of rich colors and tones; he exhibited three Venetian scenes at the National Academy in 1886, which favorably reviewed:

Palmer belongs in the ranks of the American impressionists. His pictures are distinguished by purity and truth of color…especially true of his landscapes and his Venetian lagune[sic] subjects…He sees nature without the help of the conventional resources of art.(3)

Palmer’s work was frequently exhibited throughout the 1880s and won awards at the Boston Art Club, National Academy of Design, and American Water Color Society. He received the Hallgarten prize in 1887 for January—his technique of rendering the snow using blue had never before been seen and was commended by critics. In the midst of his rising success, he married Georgianna Myers in 1890, who tragically died during childbirth only two years later. He continued to work throughout his grief, painting winter and Venetian scenes that bolstered his artistic fame well into the late-1890s, and he became a member of several prominent artist organizations, including the New York Water Color Club and Society of American Landscape Painters; he was also elected Academician of the National Academy in 1897.

The year 1895 was an important one in Palmer’s career: in January, he went on a sketching trip in Mexico with Church, was married for second time to wife Zoe de Vautrin, and received the prestigious W. T. Evans prize from the American Water Color Society of New York. The awarded work, The Vale of Tawasentha, was praised for “…the dazzling effects of sunlight on snow, the bare branches silhouetted against the gray and gold light…the picture is clear, clever, correct, without an ounce of sentiment.”(4) His work continued to be shown after the turn of the century and was exhibited at the Philadelphia Art Club, Pan-American Exposition, Society of American Artists, and St. Louis Exhibition.

Palmer’s successful career was recognized in his appointment to serve on the New York Fine Arts Federation in 1924, and he was also celebrated at the National Academy’s Centennial Exhibition in 1925. He passed away in his home in Albany, New York, after suffering a fatal case of pneumonia in April of 1932. Renowned for his exquisitely beautiful snow scenes and depictions of Venice, Palmer’s work can today be seen in the permanent collections of The Metropolitan Museum of Art, New York, New York; Museum of Fine Arts, Boston, Massachusetts; and the Smithsonian American Art Museum, Washington, D.C.