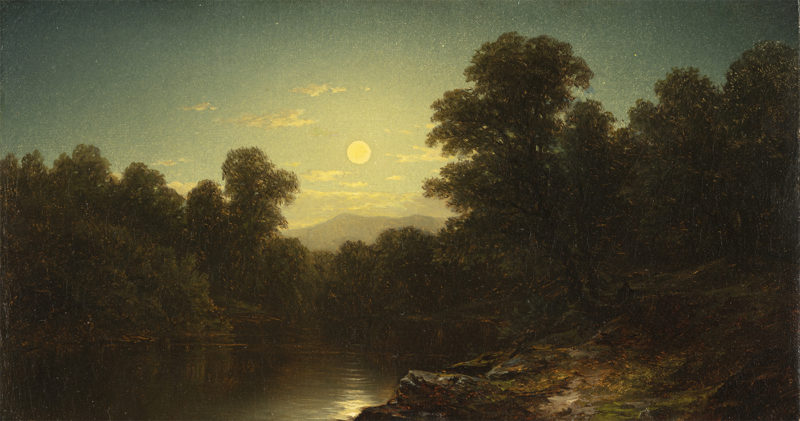 A prominent member of the second generation of the Hudson River School, Casilear was celebrated among his contemporaries for his serene, light-infused images of nature.

Born in 1811 in New York City, John W. Casilear was an accomplished engraver and painter during his lifetime. Little is known about his childhood except that he received a substantial

A prominent member of the second generation of the Hudson River School, Casilear was celebrated among his contemporaries for his serene, light-infused images of nature.

Born in 1811 in New York City, John W. Casilear was an accomplished engraver and painter during his lifetime. Little is known about his childhood except that he received a substantial amount of formal training at an early age. In 1826 he began an apprenticeship under the famous engraver Peter Maverick in Newark, New Jersey and studied landscape painting with Asher B. Durand after Maverick’s death in 1831. Like Durand, Casilear found success as an engraver early in his career, forming a banknote-engraving firm with his brother George in 1832.1 In 1851 he became a partner in the firm of Toppan, Carpenter, Casilear & Company that later merged to form the American Bank Note Company.2 Casilear was a fine draughtsman who received many important commissions including an engraving after the print “The Seven Presidents,” which was created expressly for the New York Mirror, and a reproduction of Daniel Huntington’s painting “The Sibyl,” which was published by the American Art Union.3 His engravings were heralded for their refinement, precision, and delicacy of expression.

A trip to Europe in 1840 with Durand, John F. Kensett, and Thomas P. Rossiter inspired Casilear’s permanent transition to painting in 1854. After stopping in London, he traveled to Rome during the winter of 1841–1842 where he studied the works of the Old Masters. In the spring of 1842 he toured Paris and sketched extensively throughout France and Germany.4 He also visited many of Europe’s museums which undoubtedly raised his awareness of other artists and contemporary practices. After his return to the United States, Casilear was fully committed to his trajectory as a landscape painter and traveled throughout New England, drawing inspiration from locales such as the White Mountains in New Hampshire, Lake George in the Adirondacks, and the Catskill Mountains in upstate New York. His early oeuvre was largely influenced by Durand and Cole, though he was more actively considered a member of the second generation of the Hudson River School, which included artists such as Kensett, Church, Cropsey, McEntee, and Gifford. Like his colleagues, Casilear employed elaborate details and a special emphasis on the atmospheric effects of light. His works were typically small in size, often measuring two by three feet, and featured balanced compositions. It has been noted that Casilear achieved most success in his simple, pastoral scenes in contrast to the grandiose, hyperrealistic aesthetic that was favored among the first generation of Hudson River School painters.5

Casilear passed away in 1893 at the age of eighty-two in Saratoga Springs, New York. He earned a sterling reputation with critics throughout his career; his eulogy at the National Academy of Design remarked upon the “refinement of color and softness of atmospheric effect that won him considerable distinction.” In his Book of Artists, the critic Henry T. Tuckerman wrote: “The rectitude of his character and the refined accuracy of his original profession are exhibited in his pictures. They are finished with great care; and the subjects chosen with fastidious taste; the habit of dealing strictly with form, gives a curious correctness to the details of his work; there is nothing dashing, daring, or off-hand; all is correct, delicate, and indicative of sincere finding of the truth.”6 Casilear exhibited widely during his lifetime at venues such as the American Art Union, Apollo Association, Artists’ Fund Society, Boston Art Club, Boston Athenaeum, Brooklyn Art Association, Maryland Historical Society, National Academy of Design, Pennsylvania Academy of the Fine Arts, and Washington Art Association. His works can be found in the collections of the Brooklyn Museum, Metropolitan Museum of Art, National Gallery of Art, and Museum of Fine Arts, Boston.

1811 Born on June 25th in New York City.
1826 Began studying with the engraver Peter Maverick in Newark, New Jersey.
1831 Began studying landscape painting with the artist Asher B. Durand after Peter Maverick’s death.
1833 First exhibited engravings at the National Academy of Design and elected an Associate Member of the National Academy of Design.
1840 Toured Europe with Asher B. Durand, John F. Kensett, and Thomas P. Rossiter.
1843 Returned to the United States after European sojourn.
1845 First exhibited at the American Art Union.
1847 First exhibited at the Boston Athenaeum.
1850 First sketching trip to the White Mountains in New Hampshire.
1851 Elected an Academician of the National Academy of Design.
1854 Opened a studio in New York City.
1855 First exhibited at the Pennsylvania Academy of the Fine Arts.
1857 Visited Europe again; spent two years working in Switzerland, France, and England.
1859 Returned to New York, where he rented a space in the Tenth Street Studio Building for the remainder of his life and career.
1867 Married in Tamworth, New Hampshire to Helen M. Howard.
1893 Died on August 17th in Saratoga Springs, New York, at the age of 82.