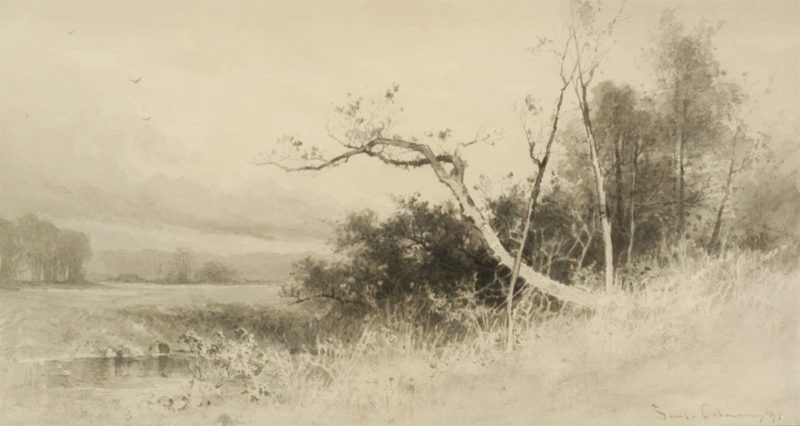 This gifted second-generation member of the Hudson River School was instrumental in pioneering the American watercolor and etching movements during the nineteenth-century.

Samuel Colman was born in Portland, Maine, in 1832, and moved to New York with his family when he was a young child. His father, a well-known bookseller and an established dealer of fine engravings, had a clientele of artists and authors that provided an

This gifted second-generation member of the Hudson River School was instrumental in pioneering the American watercolor and etching movements during the nineteenth-century.

Samuel Colman was born in Portland, Maine, in 1832, and moved to New York with his family when he was a young child. His father, a well-known bookseller and an established dealer of fine engravings, had a clientele of artists and authors that provided an early exposure to the New York City art scene and influenced Colman’s interest in painting.(1) At the age of eighteen, the aspiring artist began to develop his technique under the instruction of Asher B. Durand, who instilled within Colman an appreciation for the natural beauty of the American landscape. His artistic approach advanced quickly—so much so that he was elected an associate of the National Academy of Design in 1854. The Hudson River, Lake George and the White Mountains were all sources of inspiration for the artist during the 1850s; his poetic depictions of these areas established his reputation as one of the leading figures in the second-generation of the Hudson River School painters.(2)

In 1860, Colman left the country to participate in an important rite of passage for many nineteenth-century American painters: the Grand Tour. Although his wanderlust initially led him to France, he was later drawn to less-frequented areas throughout Spain and Morocco; he became one of the first American artists to visit these exotic locales, and their influence on his work continued well after his stateside return in 1862. Colman’s status as a prominent American painter was verified two years later, when he was elected to full membership of the National Academy. That same year, the Century Club’s Jubilee Celebration was held in honor of William Cullen Bryant and Colman’s work was included in a portfolio of sketches presented to the artist, which was composed of drawings contributed by friends and prominent painters that also included Albert Bierstadt, Frederic Edwin Church, Asher B. Durand, George Inness, Eastman Johnson, John Frederick Kensett, Emanuel Leutze, and Worthington Whittredge.(3)

Colman’s involvement in the American art scene continued to progress throughout the late 1860s: His Hudson River and New York harbor scenes were highly praised for their characteristic “delicate atmospheric effect.” Many of these works were exhibited at the Boston Art Club, Brooklyn Art Association, and National Academy of Design to critical acclaim. In 1866, Colman was one man in a group of eleven artists who banded together to found the American Society of Painters in Water Colors; members of the artist organization elected him as their first president, a position he held for three years until he was succeeded by William Hart in 1870. He became a pioneer in the American watercolor movement, and was one of the first artists to achieve critical success in the medium.

In the nineteenth-century’s emergence of etching in the United States, Colman also acted as a pivotal figure. He was a founding member of the New York Etching Club in 1877, and also helped to establish the Boston Society of Etchers in 1880. During the later years of his career, Colman traveled extensively—he ventured to the American and Canadian West and also spent four years abroad painting in Algeria, Egypt, France, Holland, and Italy. Colman’s work of this period reflects the time he spent traveling; he produced scenic watercolors and pastels depicting the Dolomites and the Canadian Rockies, as well as views of the Manhattan skyline painted from his Central Park West apartment.(4)

Shortly after the turn of the century, Colman began to explore writing, focusing primarily on art theory, and published two books, Nature’s Harmonic Unity, a Treatise on its Relation to Proportional Form, in 1912, and Proportional Form, which was released five days before his death in 1920. Colman’s career was instrumental in the advancement of American art, and his obituary in the New York Times describes him as a “foremost American landscape painter and noted etcher.”5 His works can be found in the permanent collections of important institutions, including The Art Institute of Chicago, Illinois; Corcoran Gallery of Art, Washington, D.C.; The Metropolitan Museum of Art, New York, New York; Museum of Fine Arts, Boston, Massachusetts; National Academy Museum, New York, New York; National Gallery of Art, Washington, D.C.; New-York Historical Society, New York; and Smithsonian American Art Museum, Washington, D.C.

1832 Born in Portland, Maine, on March 4
1851 Exhibits for the first time at the National Academy of Design
1854 Elected associate member of the National Academy of Design
1860–62 Travels abroad, visits Spain, France, Italy, and Switzerland
1862 Marries Ann Lawrence Dunhan
1864 Elected Academician of the National Academy of Design
1866 Founding member of the American Society of Painters in Water Colors, becomes the organization’s first president
1871 Travels to northern Europe, visits Holland, the Rhine, Normandy, Brittany, and England
1879 Forms Associated Artists, an interior design and furnishing company, with Louis Comfort Tiffany, Lockwood de Forest, and Candace Wheeler, which folds in 1883
1880 Helps establish the Boston Society of Etchers
1882 Builds home in Newport, Rhode Island
1884, 1886, 1888 Travels to California and along the Gulf of Mexico
1892 Travels to Mexico
1902 Wife Ann passes away in July
1903 Marries second wife, Lillie Margaret Gaffney in September; Travels to Mexico in December
1904 Travels to Italy after returning from Mexico in April
1905–06 Travels to Canadian West
1912 Publishes Nature’s Harmonic Unity, a Treatise on its Relation to Proportional Form
1920 Publishes Proportional Form
Passes away in New York City on March 26