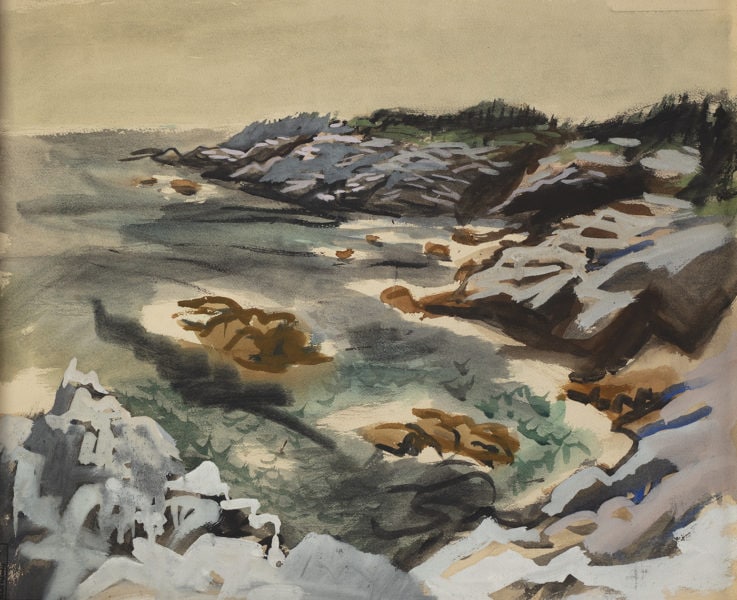 The deepest order is not within the ability of the artist to create, instead it is something that he is able to find, whether within or outside himself, and only if he is open enough, unprejudiced enough and attentive enough.[1]
—Fairfield Porter

Fairfield Porter has been called both “the most important realist painter from 1949 until his death in 1975”[2] and “one of the most lucid and intelligent art critics and writers of the post 1945 period.”[3] He continued to paint representationally throughout the height of Abstract Expressionism, yet

The deepest order is not within the ability of the artist to create, instead it is something that he is able to find, whether within or outside himself, and only if he is open enough, unprejudiced enough and attentive enough.[1]
—Fairfield Porter

Fairfield Porter has been called both “the most important realist painter from 1949 until his death in 1975”[2] and “one of the most lucid and intelligent art critics and writers of the post 1945 period.”[3] He continued to paint representationally throughout the height of Abstract Expressionism, yet he maintained abstract ideas about the physicality and sensuousness of paint, distinguishing himself from the realist genre. Further distancing himself from the realists, he considered the chosen subjects of his paintings to be less important than the paintings themselves. “The subject has the importance that the canvas has, it is a background for making a painting.”[4]

Born in Winnetka, Illinois in 1907, Fairfield Porter was of the same generation of the New York School of Abstract Expressionists. He was born into a wealthy family with an architect father and college-educated mother. His introduction to art began at an early age through visits to the Art Institute of Chicago and the first of many trips to Europe at 15 years old. In his childhood his father built a family summer home on an island in Penobscot Bay, Maine that Porter would return to for the rest of his life. This family home would become the setting of many of his works.

Porter was an intelligent youth; he graduated early from high school and was accepted into Harvard at age 16. There, he studied art theory with Arthur Pope and philosophy with Alfred North Whitehead. Upon graduation in 1928, Porter listed his future profession as “Painter.” He moved to New York to begin his studio training at the Art Students League under Thomas Hart Benton and Boardman Robinson. Unhappy with the lack of individualism taught at the school, Porter decided that he would have to teach himself how to paint and spent time traveling throughout Europe and living in Italy, copying masterpieces. His progress was slow, however, and he did not come into his mature style until 1949.

Two of Porter’s most profound influences were his visit to an exhibition of Edouard Vuillard and Pierre Bonnard at the Art Institute of Chicago in 1938, and his meeting and subsequent friendship with Willem de Kooning in 1939. In describing his awe of Vuillard’s works, Porter wrote, “what he’s doing seems ordinary, but the extraordinary is everywhere.”[5] Seeing Vuillard’s ability to paint realistically yet still create a singular experience, to paint things familiar to him but to let the painting speak for itself, gave Porter the confidence he needed to pursue his own style. In Bonnard he found form to be “more complete and thorough than any abstract painter’s.”[6] Porter respected de Kooning’s unique style and found in him the mentor he had been lacking at the Art Students League. De Kooning shared his methodology with Porter, further emphasizing that a successful painting should be objective, and that the artist must be open to the spontaneity and discovery inherent in the painting process.

The final steps toward Porter’s mature style came in the late 1940s. In 1945, he took a painting class at Parsons with former Louvre restorer Jacques Maroger. Maroger taught his students to mix a specific type of oil medium which kept the paint fluid and flexible and allowed work to be changed with ease and rapidness. This medium fit perfectly with his new concept of finding—rather than creating—form in painting, and he adopted it for the rest of his life. In 1949, he settled with his family in Southampton, New York, where he lived and worked until his death. Living in close proximity to the de Koonings and other East End artists, and surrounded by the bright light that was often absent in the city, propelled him into his best years of painting. He enjoyed consistent improvement and success until the end of his life.

Porter’s style was his own and he did not belong to any single artistic movement. He was a firm believer in art for art’s (and not ideology’s) sake.[7] Philosophically, he related to the Abstract Expressionists’ ideas about the physical qualities of paint on the surface of the canvas. He was extremely interested in the physical experiences of both the artist during creation and the viewer during interaction with the painting.[8] In subject matter, however, his figures and landscapes reflected the realists of the 1930s. In a 1966 essay titled “Art and Knowledge,” Porter explains his unique marriage of realism and abstraction: “The realist thinks he knows ahead of time what reality is, and the abstract artist what art is, but it is in its formality that realist art excels, and the best abstract art communicates an overwhelming sense of reality.”[9] Furthermore, he also had strong Impressionist sensibilities, including, his focus on capturing light, and his intimate scenes of interiors and family members in everyday activities. Porter painted the spacious living room of his Maine home numerous times, as well as repetitions of landscapes and seascapes in both Maine and Southampton, yet each was a different study in light and captured a specific time of day. Regardless of whether he set out to create a landscape, still life, or portrait, Porter remained objective in his work, always aiming to let the paint and the painting speak for itself.

In 1939, Porter began participating in group shows at the Art Institute of Chicago, Pennsylvania Academy of Fine Arts, and Artists’ Union Chicago. His major introduction, however, came with a solo show at Tibor de Nagy Gallery in New York in 1952. Between 1959 and 1968 he exhibited in six Whitney Museum of American Art annuals, and in 1968 was chosen to represent the United States at the Venice Biennale. His first retrospective exhibition was in 1966 at the Cleveland Museum of Art. Concurrent with his painting career, Porter was a successful writer. He regularly contributed to ARTnews and The Nation. In 1952, he became an editorial associate for ARTnews and later published a monograph on the American realist painter Thomas Eakins. He lectured at Maryland Institute College of Art, Queens College, Skowhegan School of Painting and Sculpture, Southampton College of Long Island University, and Yale University. His paintings are currently held in numerous prestigious collections, including, the Art Institute of Chicago, Brooklyn Museum, Metropolitan Museum of Art, Parrish Art Museum, and Smithsonian American Art Museum.

1907 Born June 10 in Winnetka, Illinois
1919 Traveled to Canada with his family
1921 The entire Porter family took a trip to Europe
1923 Graduated from New Trier Township High School
1924–28 Studied at and graduated from Harvard University
1927 Returned to Europe during the summer; Porter took a walking tour of France, and then went on to Moscow, Russia, where he attended a lecture given by Trotsky
1928 After graduating with a Bachelor’s degree in Science, Porter moved to New York, where he met Alfred Stieglitz
1928–30 Attended the Art Students league, worked with Thomas Hart Benton and Board Robinson
1931–32 Traveled to Italy, settling in Florence until January 1932
1932 In January, Porter visited Berlin, Munich, and Dresden
During the Spring, he traveled to Barcelona, Paris, and London
In September, he married Anne Channing and settled in New York
Enrolled in anatomy classes at Cornell University School of Medicine
1933 Joined Rebel Arts, a socialist art group
1935 Began writing critical articles for Arise, a socialist magazine
1936 After the death of his grandmother Porter returned to Hubbard Woods, moving in next door to his parents.
1938 Joined the Chicago Society of Artists
1939 Moved to Peekskill, New York
First one-man exhibition at North Shore Art Center in Winnetka, Illinois
1942 Enrolled in mechanical drawing classes at the Delehanty Institute
Hired as a draughtsman at Walter Dorwin Teague
Enrolled in night classes at Parsons School of Design
1951 Accepted the position of Associated Editor of ARTNews
1959 Wrote art criticism for The Nation
1966 Retrospective held at Cleveland Museum of Art, Ohio
Began teaching painting at Southampton College
1968 Exhibited in the United States Pavilion at the Venice Biennale
1969 Received honorary degree from Colby College
1970 Received honorary degree from Maryland Institute, MD
1975 Passed away on September 18 in Southampton, NY