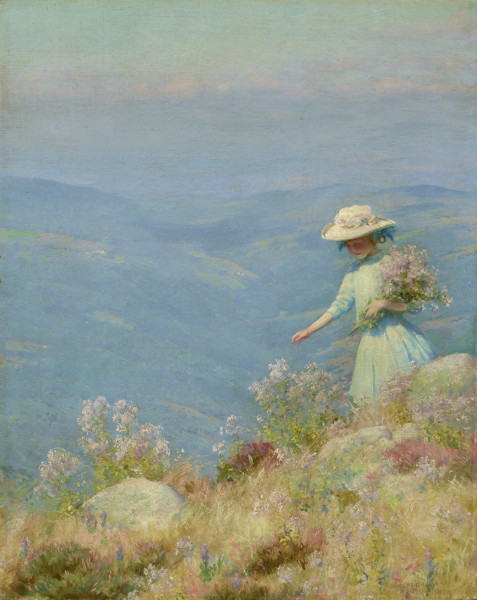 St. Nicholas Illustrated Magazine for Boys and Girls 39 (August 1912): frontispiece (as Gathering Wild Asters, An August Day in the Hills).

With a skillful rendering of form and a flair for the picturesque, Curran’s Impressionist landscapes and figures are some of the most striking examples of this genre in American art.

With a skillful rendering of form and a flair for the picturesque, Curran’s Impressionist landscapes and figures are some of the most striking examples of this genre in American art.

Charles Courtney Curran’s portraits and landscapes are among the most cherished and refined images of America in the late nineteenth and early twentieth centuries. Curran was born in Hartford, Kentucky in 1861, but spent his childhood in Sandusky, Ohio. Curran’s father was an amateur painter who fostered his early love of art. After graduating from Sandusky High School, Curran enrolled in the Cincinnati School of Design in 1880 and was accepted as a student at the National Academy of Design in 1882. In 1883, he moved to New York City to continue his studies and further his career. Under the tutelage of Walter Satterlee, and through additional training at the Art Students League, Curran quickly cultivated his artistic reputation and would soon become one of the Academy’s most distinguished members. While still a student, Curran showcased one of his works at the Academy’s annual exhibit that year.

In 1888, Curran traveled to Europe where he would absorb the tenets of the French Impressionist style and hone his artistic technique. He enrolled in the Académie Julian in Paris, France and studied under the artists Jean-Joseph Benjamin Constant, Henri-Lucien Doucet, Jules-Joseph Lefebvre, and P.A.J. Dagnan-Bouveret. Curran joined a burgeoning group of American expatriates who introduced Impressionism to America at the turn of the century, including fellow artists James Abbott McNeill Whistler, Mary Cassatt, John Singer Sargent, and Childe Hassam.

Curran was enormously popular among his contemporaries and his works were heralded by critics for their beauty, delicacy and sophisticated style. Curran sought solace in nostalgic landscapes that represented the simplicity of the past. He is best known for his portraits, genre scenes, and idealized views of nature. He typically depicted tranquil, noble images of women and children set outdoors amid lush gardens and expansive pastures and hillsides, rendered with soft features and a trademark innocence and charm.

Curran’s artistic style and link with Impressionism remained consistent throughout his career. He was undoubtedly influenced by the French practice of plein air, or painting outdoors. Like the European Impressionists, Curran imparted a vivid color palette, loose brushstroke, and brilliant light to his works. He was an undisputed master of his genre, an American artist who revitalized the French Impressionist tradition in an American landscape. As a critic acknowledged: “Anyone knowing him could discover in his work qualities redolent of two worlds, Ohio and Paris. His scenes are taken from the woodland of the old Buckeye State, lightened by a refinement and delicacy of technique gathered from the best French masters.” Another critic wrote: “He allures the eye and the heart and the brain not so much by a suggestion of a tale as by a composition of graceful forms. It is Mr. Curran’s art that hold’s the spectator’s gaze.”

In 1903 Curran was invited to visit Cragsmoor, a town located in New York’s Hudson River Valley, and was immediately taken by its surrounding scenery. Curran eventually built a studio there in 1910 and would divide his time between Cragsmoor and New York City during the last thirty years of his life. He is regarded as a leader of the Cragsmoor art colony and is best remembered for his images of young, elegantly dressed women bathed in bright sunlight. The subjects were typically perched on top of cliffs set against a background of wispy, dramatic clouds and expansive blue skies. The beauty and serenity of the paintings of this period are considered a hallmark of Curran’s artistic style.

Curran received many distinctions from the art community during his lifetime. He received the Julius Hallgarten Prize and was additionally elected an Associate of the National Academy of Design and a member the Society of American Artists prior to studying in Europe in 1888. In 1890 he won Honorable Mention at the Paris Salon. In 1893, he received the Thomas B. Clarke Prize and a second Julius Hallgarten Prize in 1895. He was formally inducted a member of the National Academy of Design in 1904 and would remain one of its most active participants until his death, serving as a Council Member, Recording Secretary, and the Corresponding Secretary for over fifteen years.1 In 1920, he won the Altman prize at the National Academy show in NYC in addition to the second and third Hallgarten Prizes from the Academy. He received the first Corcoran prize in Washington, D.C., medals at the Chicago, Cotton States, Buffalo and St. Louis exhibitions, and the Shaw Fund prize of the Society of American artists.2 He additionally served as a faculty member at the National Academy, the Pratt Institute, and the Cooper Union.

In the last weeks of his life, Curran suffered from an undisclosed illness. He died in New York City on November 9, 1942 at the age of 81.

Throughout a prolific and impressive career, Curran established himself as a reputable player in America’s art scene. His works were exhibited at the National Academy of Design’s yearly exhibit throughout an astounding six decades, in addition to receiving countless prizes during his lifetime. His works are exhibited at museums and galleries throughout the United States including the Metropolitan Museum of Art, the Brooklyn Museum of Art, the Smithsonian American Art Museum, and the Museum of Fine Arts, San Francisco.