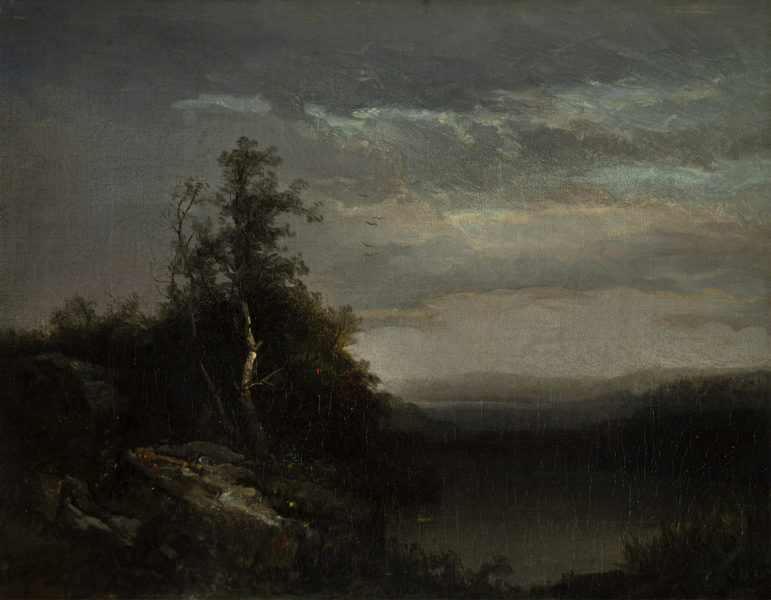 American painter most noted for his landscapes and for being one of the first to introduce Impressionism into American painting.

Once hailed the “most poetic of all American landscape painters,” Martin's expressive landscapes are most closely associated with the Hudson River School.

Homer Dodge Martin was born on October 28, 1836 in Albany, New York as the youngest of four children. It is said that he was handed a pencil and paper from twenty months of age, and that as a student, he frequently sketched outside scenes instead of

American painter most noted for his landscapes and for being one of the first to introduce Impressionism into American painting.

Once hailed the “most poetic of all American landscape painters,” Martin's expressive landscapes are most closely associated with the Hudson River School.

Homer Dodge Martin was born on October 28, 1836 in Albany, New York as the youngest of four children. It is said that he was handed a pencil and paper from twenty months of age, and that as a student, he frequently sketched outside scenes instead of paying attention in class.[1] After a brief time working for his father’s carpentry shop, Martin pursued work at his cousin’s architectural firm. However, due to astigmatism, Martin was unable to draw verticals, which reportedly kept him out of participating in the Civil War. Eventually, the sculptor Erastus Dow Palmer, who mentored young artists in Albany, convinced Martin’s father to allow him to pursue painting. Luckily for Martin, Albany was a center of culture and local patronage at the time, as other landscapists such as William and James Hart and George Boughton were also under Palmer’s wing.

Martin’s earliest stylistic influence was that of the Hudson River School, producing panoramic and detailed sweeping vistas. However, his pieces from this time still foreshadow Martin’s later taste for generalized, broad, and balanced spaces. At sixteen, Martin made a modest living by selling his small views of New York and New England.

By 1859, his work developed, distinguishing his style from that of his contemporaries in his use of color and composition. His pieces from 1860s were thinly textured and showed fine, simple arrangements of large masses of balanced color; a notable example of this time period is Old Mill (1860, Georgia Art Museum). At first, his sources for compositions were the Berkshires, but Martin gradually widened his scope to include the Catskills, Adirondacks, and White Mountains. His first exhibition was in 1857 at the National Academy and featured works from Salisbury, Connecticut in the Berkshires such as Twin Lakes (1856, whereabouts unknown) were shown.

After marrying Elizabeth Gilbert, the newlyweds moved to New York in the winter of 1862–63 and Martin opened his own studio in the Tenth Street building. He made acquaintance with many important painters and writers of the day, such as Sanford Gifford, Richard Hubbard, C.C. Griswold, J.G. Brown, Jervis McEntee, Julian Scott, Eastman Johnson, and Launt Thompson.[2] At this time, Martin began to repaint earlier works, simplifying them but retaining the same arrangements. He began to generalize landscapes more because of his visual disability, distrusting his eyesight. Yet Martin continued to be inspired by the wilderness, especially the Catskills and Adirondacks. Lakes at the headwater of the Hudson, however, seem to have had the deepest impact on Martin, as he painted scenes of Lake Sanford, Lake Henderson, and Elk Lake. Lake Sanford (1870, whereabouts unknown) in particular is noted to be the pinnacle of Martin’s early work.

In 1866, Martin was elected to membership at the Century Club, broadening his network and exposure to the art scene in New York. His refusal to attend buyers’ drawing rooms limited his ability to gain patronage. By 1870, Martin began to add colors not found in nature into his works, counter to Academy rules. Acquiring the reputation as an eccentric, his work began to be judged as undesirable for investment. However, Henry T. Tuckerman lauded Martin’s lake scenes in his The Book of the Artists in 1867, and the National Academy conferred full status on him in 1874. Despite his comradeship with various intellectuals such as architectural critic Montgomery Schuyler and Doctor Samuel Stimson of the Century Club, and his revere of Winslow Homer and John LaFarge, Martin looked disdainfully at many of his fellow artists and kept himself apart from the other Academy members. [3]

As a result, Martin was able to paint few, but significant, pictures in his lifetime and cultivated a small circle of patrons late in life. His long fallow periods of refusing to paint due to lack of inspiration and motivation became legendary when Edward Gay drew a satiric illustration of Martin dozing in the sun titled Homer Hard At Work. It was Martin’s practice to have long periods of thought interspersed with productive ones; his paintings were completed long after basic sketches, resulting from a period of meditation and careful selection.

In order to supplement his income, Martin turned to illustration, the first record being in the September 3, 1870 issue of Every Saturday, published in Boston. During 1871, Martin’s Winter Poems, an illustration of an Adirondack landscape with lake and mountains, was published to illustrate William Cullen Bryant’s poem The Snow Shower.

Around 1870, Barbizon works began to be displayed in New York, and peer Launt Thompson told Martin that his works seem to imply that he was taught by Corot. Martin’s works around this time contained beautiful color and a high level of draftsmanship. His style was based on instinct rather than theory, as he emphasized qualities by their dominant features rather than minute details. These traits were his use of recurring moods and a contemplative tradition, executing the same themes repeatedly and from memory.

Homer began to use charcoal and watercolor in the late 1860s, favoring the latter over time. During his first trip abroad in 1876 to France, Holland, Belgium, and England, Martin met and befriended James McNeill Whistler. Returning to New York, Martin was asked to join the new Society of American Artists in 1877, formed in opposition to the National Academy. His work during this time also moved from panoramic scenes to more modest landscapes, taking on more intimacy and broader brushstrokes to emphasize masses of light. Though his paintings gained praise from critics and writers, his works did not sell well due to the dealer preferences at this time to works by French Barbizon artists.

In 1881, an illustration Martin contributed to Scribner’s led to a commission in England with a stay at Whistler’s studio. While in London, the Martins were invited to join their friend, Bryant Godwin, in Normandy. They met up there with artist and illustrator W. J. Hennessy, and remained until late 1886. The money he received from illustrations supported their living in Villerville and even though Martin produced only four paintings in six years, his confidence grew as his art broadened. Martin had mastered his style by this time, articulating specific form as mere indication, with the rest glorious color and vast space, and his color became more saturated and unified than before.

Martin was among the first American painters to move the focus of landscape painting to the sky and for eliminating traces of mankind’s presence.[4] His best works were moods of nature, with a limited range of subjects. His View on the Seine (1895, Metropolitan Museum of Art) is an example of his ability to paint with tremendous depth of feeling while capturing a “musical” quality without any irrelevant details.

Exposed to the blooming of Impressionism during his stay in Normandy, Martin adopted soft, shimmering color, yet not their fragmentation nor saturated palette. His technique changed to one of laying on paint thickly with the brush or palette knife, and rendering the sky and water with heavy strokes in different tones. Despite these high quality works, consistent financial success continued to elude him.

By 1890, Martin’s health began to decline; blind in one eye due to a dead optic nerve, his other remained clouded by a cataract. In June 1893, Martin closed his New York studio due to financial troubles and declining health, and moved to St. Paul, Minnesota to live with his wife and eldest son. There, he completed what critics would later recognize as some of his best works, such as Criqueboeuf Church (1893, Charles Russell Collection of Deerfield Academy).

Martin’s final days were spent in relative comfort due to the largesse of his New York friends. In August of 1896, a growth in his throat developed which caused him great discomfort. By October, the growth was identified to be cancerous. After a brief period of agony, Martin died on February 2, 1897. The New York newspapers did not note his passing.

For Martin, landscape was not simply God’s product, but the tool he used to express emotion. Mood and coloration are primary in his works; some pervaded by serenity, others pensiveness. His beginnings as an artist are scenes of the Adirondacks and White Mountains, but his move to New York resulted in a broader style and crisper light. His best pictures were produced as he was losing his eyesight and repainting older scenes of America from memory. Like his earlier works, these were also composed without portraying any figures or animals, which would distract from the intended emotional reaction. John Dennett once remarked that “Martin’s landscapes look as if no one but God himself had seen the places.”[5]

Martin was described as a painter of sentiment, a poet as much as a painter. His exposure to European art, especially Corot’s and Constable’s works and those of the Barbizon school, only validated his own vision. Barbizon refined his idea of the essential character of nature, however, his focus on the sky, with a breadth of vision and progressive elimination of detail, were uniquely Martin’s. All of these qualities make up Martin’s legacy as one of America’s greatest landscape painters.

1836 Born on October 28 in Albany, New York
1849 Completed formal education; begins work at father’s carpentry store
1850 Sculptor Erastus D. Palmer took Martin under his wing in Albany
1857 Exhibited at the National Academy for the first time
1861 Married Elizabeth Gilbert
1863 Moved to New York City and painted at James Smillie’s studio
1865–69 Summered in Adirondacks
1866 Eleted membership of the Century Club
1867 Henry T. Tuckerman complimented Martin in The Book of the Artists
1868 Elected Associate of the National Academy
1870 Earliest known Martin illustration published in Every Saturday
Painted Lake Sanford and submitted it to the Centennial Exposition in Philadelphia
1871 Visited Duluth, Minnesota with Jay Cooke
Illustration Winter Poems is published for Bryant’s poem The Snow Shower
1872 Visited Smoky Mountains in North Carolina
1873 Summered in Lake Ontario
Illustration A White Mountain Brook published in The Aldine
1874 Received Academician status at the National Academy
1876 First trip to Europe, visited France, Holland, and England, saw works by Corot and the Barbizon artists; returned to New York in December
1877 Became one of the organizing member of the Society of American Artists
1878 Left for Concord, Massachusetts to illustrate an article for Scribner’s Monthly
1879 Visited the Sanguenay and St. Lawrence Rivers
1881 Left for England for Century Magazine to do illustrations, then to Normandy and Brittany
1886 Visited Paris Salon and then returned to New York
1892 Last trip to England to Bournemouth to visit George Chalmers
1893 Moved to St. Paul, Minnesota
1894 Last visit to New York for Century Club reunion
1895 Completed Harp of the Winds, now in the Metropolitan Museum of Art
1897 Died of malignant throat tumor on February 12