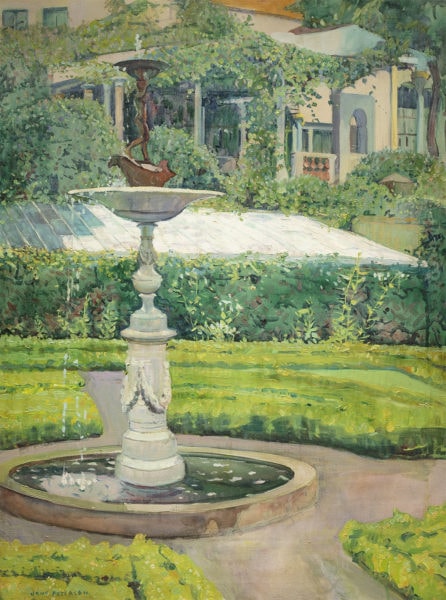 Private collection, Massachusetts, by descent from above

Note: This work depicts the bronze fountain sculpture titled “The Boy,” by Elihu Vedder (1836–1923), which he designed for Laurelton Hall, the Long Island, New York, estate belonging to designer Louis Comfort Tiffany (1848–1933). Peterson first met Tiffany in 1910 in New York, and he invited her to spend several months painting at his estate, where she depicted the house and gardens.[1] In 1916, Peterson continued her affiliation with Tiffany and joined him and others on a transcontinental painting trip through Alaska and the Northwest of Canada.[2]

Best known for her Impressionistic paintings of flowers, Jane Peterson was an adventurer at heart; challenging the conventions of her time she traveled independently on painting trips to Europe, Africa, and the Middle East.

Jane Peterson was an artist who achieved significant critical attention and adulation over the course of her career. Following her first American solo

Best known for her Impressionistic paintings of flowers, Jane Peterson was an adventurer at heart; challenging the conventions of her time she traveled independently on painting trips to Europe, Africa, and the Middle East.

Jane Peterson was an artist who achieved significant critical attention and adulation over the course of her career. Following her first American solo exhibition in 1909, a critic observed, “There is not a dull canvas in the entire collection and everything is interesting”.1 Thirty-five years later, Historical Records published her biography in the almanac Prominent Women of New York.2 Regardless of her success, Peterson remained pragmatic as she always sought to challenge herself with new ideas and techniques. She spent a lifetime immersed in the practice of painting; as a student, teacher, and gifted artist.

Peterson was a painter with little interest in self-promotion or the conventional achievements of an artist, as a result there has only been a moderate body of scholarship written about her posthumously. Peterson’s legacy is her brilliant oeuvre of impressionistic paintings, held by collections such as the Metropolitan Museum of Art, the Philadelphia Museum of Art, and the Brooklyn Museum of Art.

Jennie Christine Peterson was born in Elgin, Illinois in 1876. From an early age Peterson, who was known throughout her life as Jane, showed a natural talent for drawing. As a teenager, having received no formal art training, Peterson sat the art aptitude test conducted by the Pratt Institute. The results were promising and, in 1895, Peterson moved to New York to study at the Pratt Institute in Brooklyn.

Peterson thrived at Pratt as a conscientious student, although it was not an easy time for her financially. When her money ran low Peterson gave art lessons to other students, and also earned some income through the sale of her paintings in student exhibitions. When Peterson graduated in 1901, she began working as Drawing Supervisor of Public Schools in Brooklyn. She also continued her art education taking classes at the Art Students League. Between 1904 and 1906 Peterson worked as an art teacher in New York, Massachusetts, and Maryland. In 1907, Peterson sailed to Europe where she visited artists and museums in France, Holland, and Italy. She found Europe to be more socially progressive for women artists and decided to stay and continue her art education.

While in Europe, Peterson studied under Frank Brangwyn at the London School of Art, before relocating to Paris where she received instruction from Jacque-Emile Blanche, Charles Cottet, and Claudio Castelucho. Throughout 1908, Peterson was extremely productive, creating many works in her spare time while also taking on portrait commissions to augment her income. She lived in rooms in Montparnasse located around the corner from Gertrude Stein’s salon, where on Saturday evening artists and art enthusiasts would gather to view and discuss Stein’s seminal collection of Modern art. Attending these events Peterson surrounded herself with powerful art luminaries such as Pablo Picasso, Henri Matisse, Georges Braque, André Derain, and Henri Rousseau.

Peterson’s style from this period is neither entirely academic nor avant garde. Rather she blends the technical skills of her academic training with the loose brushwork and bold color palette of her contemporaries to produce paintings that are beautiful impressions of life. Peterson’s early oil paintings from Europe often show flat generalized areas of color contrasted with skilled detailing – brickwork, window frames, clothes, etc. – that perfectly conjure a scene.

While in Paris, Peterson exhibited her work at the Société des Artistes Français. Then, in 1909, she had her first American exhibition at the Botolph Club, Boston. Favorable reviews ensured this exhibition marked a decisive point in her career, as she shifted from diligent student into the role of a mature artist. However, despite her success Peterson’s single-minded passion for painting kept her open to experimentation new techniques, as she considered perpetual learning and re-learning to be essential practices for an artist. Following two more successful solo exhibitions in 1909, Peterson returned to Europe where she commenced studying with the acclaimed Spanish artist Joaquín Sorolla y Bastida in Madrid.

Of all her teachers, Sorolla had the most influence upon Peterson’s style. Sunlight-drenched Spanish scenes characterize Sorolla’s works. After 1909, Peterson’s canvases become more daring with color, as layers of loose brushstrokes combine to represent the shimmer of Summer’s light in southern Europe. In 1910, Peterson travelled alone to Egypt and Algiers – an extremely brave move for a woman in the early 20th century – where she did a series of paintings in her new bold style. These works were exhibited later that year in a solo exhibition at the Art Institute of Chicago.

In 1911, Louis Comfort Tiffany invited Peterson to his estate, Laurelton Hall, in Oyster Bay, Long Island. Peterson remained at Laurelton for many months, painting the estate’s magnificent gardens. Her love for nature, particularly flowers, would become a subject matter that would increasingly occupy her work. She stated later in life, “I adore gardens! They are the most elusive art of a nation.”3 After 1912, Peterson worked increasingly with gouache as the medium allowed her more freedom for painting en plein air and experimenting with quick strokes of color. She often combined charcoal with gouache, as drawing details with charcoal allowed Peterson to be even more free and light with her paint. Between 1913 and 1919 Peterson worked as a watercolor instructor at the Art Students League.

During the 1910s and 1920s Peterson continued to travel extensively overseas, taking solo painting trips to France and Turkey. Closer to home, she visited Canada, Alaska, California, Florida, and the states of New England. As a result of her adventures around the globe, many of Peterson’s subjects are quite internationally debonair and socially minded in an era when many women favored painting domestic scenes of women and children. For example, during World War One, Peterson joined the war effort painting military portraits and patriotic scenes of women rolling bandages and folding blankets at the Red Cross Center. Spending six months in Turkey in 1924, she painted streets scenes in the Islamic cities of Constantinople and Broosa.

In 1925, Peterson married Moritz Bernard Philipp, a successful corporate lawyer. The couple moved to five-story home on Fifth Avenue in New York City, directly opposite the Metropolitan Museum of Art. A sixth story was added to their home to be Peterson’s studio. After her marriage Peterson focused on flower painting, a subject that would occupy her practice for the rest of her life. She explains:

[Flowers] scintillate the prismatic hues of the rainbow; they harmonize the pastel shades of the night; they are all that is delicate; all that is lurid, brilliant, bizarre. They are living things with personality and refinement, with delicacy of form and structure, with variety of size and shape, with rhythm and charm of arrangement, with grace and dignity of bearing.4

Peterson approached flower subjects with the same intense single-minded passion that drove her to travel solo around the world. She analyzed flowers as mysterious objects of beauty that required diligent attention and sensitive expression. Flowers were by no means an undemanding subject for Peterson.

After Philipp died in 1929, Peterson continued to travel frequently. Throughout the 1930s and 1940s she often spent Summer in Europe, Fall and Spring in New York, and Winter in Palm Beach, Florida. In 1938, she studied with the Modernist André Lhote in Paris. During this time Peterson continued to paint her ‘flower portraits’, and she had numerous exhibitions in New York and Florida.

By the mid-1950s arthritis had affected Peterson’s hands so badly that she could only paint occasionally. Peterson spent the last five years of her life living with her niece in Kansas. She died in 1965.

Since Peterson’s death, her works continue to be highly coveted by collectors. This is due partially to her artistic oeuvre not fitting neatly into a single movement of art history. Peterson’s love for painting floral arrangements is not consistent with her contemporaries’ ideas of the avant-garde. However, while Peterson painted gardens, town squares, and beach scenes in an impressionistic representational style, she was also – like her Modernist peers – pushing the boundaries of an accepted norm. Peterson’s biography is a testament to her passionate, and very determined quest to depict beauty. She persevered against the conventions of her modest upbringing to establish a career as an artist, and she preserved against the conventions of her gender to establish herself as an independent and internationally experienced artist. As a result, Peterson’s flower portraits and international landscapes are a tribute to her adventuresome spirit and resolve to capture elusive beauty on canvas.

1876 Born in Elgin, Illinois as Jennie Christine Peterson
1895 Moves to New York to study painting at the Pratt Institute
Supports herself by teaching her fellow classmates, and selling her paintings in student exhibitions
1901 After graduation continues her studies with painter Frank Vincent Dumond at the Art Students League
Works as Drawing Supervisor of Pubic Schools in Brooklyn
1904 Works as a school teacher in Elmira, New York
1905 Employed as Drawing Supervisor of Public Schools in Boston, Massachusetts
1906 Works as an art teacher at the Maryland Institute School of Art and Design
1907 Travels to Europe where she takes lessons from Frank Brangwyn at the London School of Art
1908 Relocates to Paris where Jacque-Emile Blanche, Charles Cottet, and Claudio Castelucho are her teachers
Lives in Montparnasse and attends Gertrude Stein’s Saturday evening salon gatherings with Pablo Picasso, Henri Matisse, Georges Braque, André Derain, and Henri Rousseau
1909 Has first solo American exhibition at the Botolph Club, Boston
Returns to Europe to study with Joaquín Sorolla y Bastida in Madrid
1910 Takes solo painting trip through Egypt and Algiers
1911 Paints at Louis Comfort Tiffany’s estate, Laurlton Hall in Oyster Bay, Long Island
1913 Becomes an instructor in watercolor at the Arts Students League, where she teaches for the next seven years
1916 Travels with Tiffany’s party on a transcontinental painting expedition through Alaska and Canada.
Visits California, painting in Los Angeles and San Diego
1917 Paints military portraits and patriotic scenes during World War One
1922 Exhibits Toilette at the New York Society of Painters where judges describe is as an “outstanding picture”
1924 Spends six months painting in Turkey
1925 Marries Moritz Bernard Phillip (he dies in 1929)
Moves into New York townhouse on Fifth Avenue, opposite the Metropolitan Museum of Art
Focuses on flower painting (a subject that will predominately occupy Peterson’s practice for the rest of her life)
1938 Studies with the Modernist André Lhote in Paris
Named most outstanding individual of the year by the American Historical Society for artistic achievement
1945 Biography published in Prominent Women of New York
1955 Arthritis affects hands so badly she can only paint occasionally
1960 Last paintings are exhibited at the North Shore Show in Gloucester, Massachusetts
Moves to Kansas to live with niece
1965 Dies at age 88