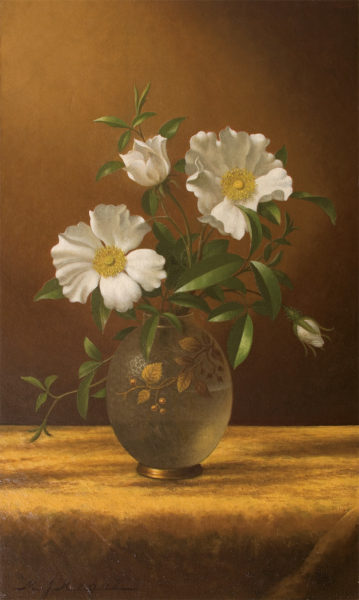 Note: The Cherokee rose is a flower that grows in the American South. Heade began sketching these flowers shortly after his arrival in Florida in the mid-1880s.[1]

Scholar Daniel Strong notes in An American Palette: Works from the Collection of John and Dolores Beck that, “As a still-life painter, Heade is better known today for numerous images of hummingbirds and orchids set in a tropical background. In his interior still lifes he exchanged the high-key complementary colors of tropical flora for a palette of fewer hues executed in a myriad of shades. Cherokee Roses in an Opalescent Vase is composed primarily of white, green, and amber, yet he explores the full range of these colors, from whites that delineate the petals of the rose to the spectrum of greens that describe the play of artificial light across the surface of the leaves.

The vase, which acts as both prism and mirror for the colors that surround it, is one that appears several times in Heade’s work, but always from subtly different vantages. In doing so, Heade challenges us to find within a general sameness of appearance the qualities that are, like the rose itself, unique.”[2]

Heade pursued the delicately wrought realism of his Hudson River School contemporaries, underscored by his folk art training, to unify landscape painting with a scientific interest in ornithology and botany.

Only a bare outline of celebrated Martin Johnson Heade’s life is known and only a fraction of his known works have been located.1 However, despite the dearth of primary biographical material, this

Heade pursued the delicately wrought realism of his Hudson River School contemporaries, underscored by his folk art training, to unify landscape painting with a scientific interest in ornithology and botany.

Only a bare outline of celebrated Martin Johnson Heade’s life is known and only a fraction of his known works have been located.1 However, despite the dearth of primary biographical material, this versatile and exceptionally talented nineteenth-century American is a highly regarded artist whose meticulously painted canvases continue to enchant audiences with their originality and jewel-like details. Heade is especially recognized for his images of tropical subjects––orchids, passion flowers, and hummingbirds––and salt marsh scenes of northeastern America.

Martin Johnson Heade (originally Heed) was born in 1819 in Lumberville, Bucks County, Pennsylvania where his family ran a general store and post office. As a youth, Heade trained with the local Quaker folk artist Edward Hicks, and possibly with his cousin Thomas Hicks. During this minimal artistic training Heade devoted himself to painting portraits, and in 1841 he debuted as an artist when Portrait of a Young Lady (unlocated) was shown in the annual exhibition at the Pennsylvania Academy of Fine Arts.

In 1843 Heade left Lumberville and moved to New York City. The same year he exhibited his first painting at the National Academy of Design. This move to New York signaled the beginning of Heade’s life as an itinerant painter. For the next forty years he traveled across North America, South America and Europe, developing his artistic style while also seeking out new commissions.

From 1843 to 1847 Heade moved along the East Coast spending periods of time in Trenton, Brooklyn, Richmond, and Philadelphia. A professional highlight from these years was traveling to Washington D.C. in 1846 to paint to the portrait of General Samuel Houston, the hero of the Battle of San Jacinto. In 1848–49 Heade spent two years abroad, mostly in Rome. Upon his return to America he resumed his journeyman painter lifestyle spending time working in cities such as St. Louis, Chicago, Trenton, Providence, Mobile, and New Orleans.

Over the course of this peripatetic lifestyle Heade’s subjects became more diverse. He began to paint landscapes during the mid-1850s, and in 1856 exhibited his first landscape, Scene on Narragansett Bay (unlocated) at the Pennsylvania Academy of Fine Arts. During the summer of 1857 Heade took a sketching trip to the White Mountains in New Hampshire where he met John F. Kensett and Benjamin Champney.

In 1858 Heade returned to New York and secured the last available studio in the new Tenth Street Studio Building. Fellow artists in this building included Hudson River School luminaries Frederic Edwin Church and Sanford Robinson Gifford. Church became one of Heade’s few close friends in the American art world, and Heade’s work changed dramatically at this time; he gave up portraiture and began to specialize in landscape and still life.

The style and composition of Heade’s early landscape paintings show the influence of his association with Hudson River School artists. However, by 1859, Heade had also begun developing his own innovations with landscape painting. As well as depicting typical Hudson River valleys and mountains, Heade began painting marine images and marsh scenes. Works such as Approaching Thunder Storm (1859; Metropolitan Museum of Art) demonstrate an originality as he merges a Hudson River School aesthetic theory of the Sublime with his folk art roots. In addition to seascapes, Heade was devoted to depicting salt marshes of which nearly 120 paintings by the artist are known to exist. For the next forty-five years Heade regularly painted the marshes of northeastern America under every kind of atmospheric condition.

In 1863 Heade traveled to Rio de Janeiro, Brazil for the purpose of preparing works for a book on South American hummingbirds. Heade created and exhibited a series of small hummingbird paintings, The Gems of Brazil (1863–1864), in his Rio de Janeiro studio. The emperor Dom Pedro II took an interest in Heade’s work and made him a Knight of the Order of the Rose for his painting achievements.

In 1864 Heade travelled from Rio de Janeiro to London in order to have his paintings chromolithographed. While the book was never published, Heade did take advantage of his second time in London; he leased a fashionable studio and began selling his works for increased sums. He also exhibited his work at the Royal Academy.

Heade made several subsequent trips to South and Central America visiting Nicaragua in 1866 and Colombia, Panama, and Jamaica in 1870. After 1870, Heade’s disparate interests came together stylistically as he began to combine the familiar subjects of landscape and still life along with bird studies and botanical illustration. Typical works from this period use dramatic effects of scale as foreground images of hummingbirds, passion flowers, and orchids are framed by majestic background landscapes.

At the age of sixty-four Heade married Elizabeth Smith in New York and the couple moved to St. Augustine, Florida in 1883. Heade finally settled down in St. Augustine; he found a supportive patron in the oil tycoon Henry Morrison Flagler and inspirational subject matter in the Florida landscape and tropical fauna. Heade returned to painting larger canvases reminiscent of his earlier Tenth Street Studio days. He also painted still lifes with renewed vigor; mostly striking was a series of reclining magnolias. Heade continued to exhibit his work in northern cities.

Heade died on September 4 in 1904. He was buried at Evergreen Cemetery in Brooklyn, New York and his work disappeared into relative obscurity. It was not until the 1940s that art historians began to revise Heade’s oeuvre and consider his importance within the Hudson River School and also, more significantly, his inventiveness as an artist of his own creation.

1819 Martin Johnson Heed is born in Lumberville, Bucks County, Pennsylvania, the eldest child of Joseph Cowell Heed and Sarah Johnson Heed
Lives in Bucks County until around 1842
c.1837–39 Takes painting lessons with Edwin Hicks and possibly also his brother, Thomas Hicks
1841 Makes his artistic debut at the Pennsylvania Academy of Fine Arts
1843 Moves to New York City
Exhibits for the first time at the National Academy of Design
1844 Moves to Trenton, New Jersey
1845 Lives in Brooklyn, New York and then moves to Richmond, Virginia
1846 Changes the spelling of his name to ‘Heade’
Goes to Washington D.C. to paint to the portrait of General Samuel Houston, the hero of the Battle of San Jacinto
1847 Takes another trip to Trenton and then moves to Philadelphia
1848–50 Travels to Rome, also visits England and Paris
1850s Returns to America and continues to work as an itinerant artist, exhibiting regularly while moving between various cities
1851–53 Lives in St. Louis, Missouri
1853–54 Moves to Chicago
1854–56 Moves back to Trenton, New Jersey
1855 Visits Bristol, Rhode Island
1856 Moves to Providence, Rhode Island
1857 Visits the White Mountains in New Hampshire in July where he meets John F. Kensett and Benjamin Champney
Works at father’s house in Lumberville, and also visit Trenton in September
Is in Montgomery, Alabama by December
1858 From January to April, continues to travels through Alabama and south to New Orleans
Is in Chicago in May and by June is in Providence
Spends September in Bristol
By November is back in New York
1859 Visits New Haven, Connecticut
1860 Travels through Providence; Boston; Thousand Islands, New York; Burlington, Vermont; and White Mountains, New Hampshire
1861 Moves to Boston where he remains until 1863 (takes trips to Newport; and Manchester, Rhode Island)
1862 Has studio at 2 Studio Building, corner of Tremont and Bromfield Streets in Boston
In July, visits Campobello Island and St. George in Passamaquoddy Bay, New Brunswick
1863 Travels to Rio de Janeiro, Brazil with Reverend J.C. Fletcher to prepare works for a book on South American hummingbirds (it is never published)
1864 Made a Knight of the Order of the Rose by Emperor Dom Pedro II
Travels to London in May
1865 Exhibits at the Royal Academy in London
Returns to the United States and lives in Providence
1866 Takes a short trip to Nicaragua between June and August
In early Fall Returns to the United States where he sublets Frederic E. Church’s studio in the Studio Building at 51 West Tenth Street, New York
1868 Elected to the Union League Club
1869 Visits Cambridge, Massachusetts and Newport, Rhode Island
1870 Travels to Latin American and the Caribbean where he visits Barranquilla and Santa Marta, Colombia; Colon, Panama; and Kingston, Jamaica
Returns to New York in May
1871 Visits Lake Mohonk, New York
1872 Spends summer travels around upstate New York, visits Lake George, Lake Champlain, and Lebanon Springs
1873 Takes a trip to Newport
1875 During spring travels overland to San Francisco
1876 Travels to Manchester and through Connecticut
1877 Takes a trip to Lebanon Springs
1880 Publishes article in Forest and Stream
1881 Spends summer in Bridgeport and moves to Washington, D.C. by winter where he stays until next summer
1882 Lives at the St. Denis Hotel in New York in June
Travels in Northampton, Massachusetts in July
Visits Boston in November
1883 Takes a trip around Florida visiting Jacksonville, Palatka, Enterprise, Ocala, and Waldo before settling in Saint Augustine (he remains here for the rest of his life)
Marries Elizabeth Smith on a trip to New York in October
1885 Visits New York in September
1887 Moves into studio building behind the Ponce de Leon Hotel (occupies until his death)
1904 Dies and is buried at Evergreen Cemetery in Brooklyn, New York