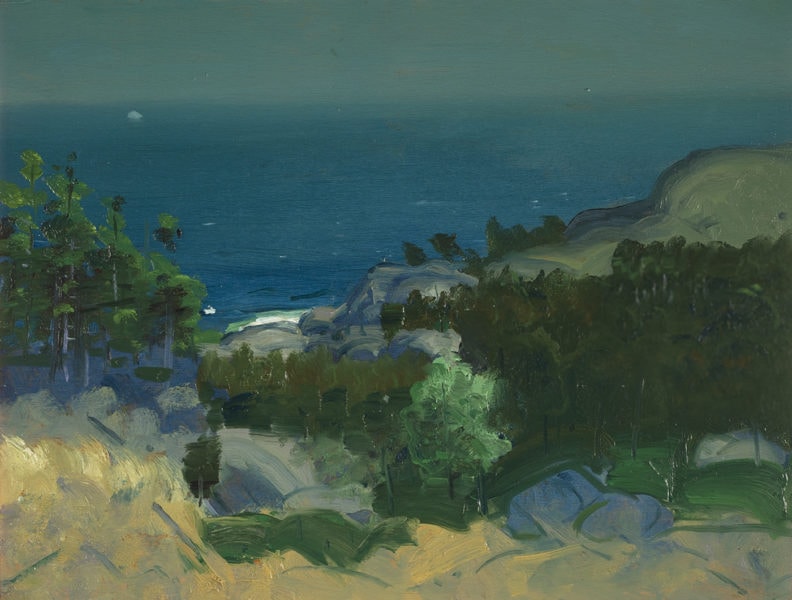 Private collection, Michigan, by bequest from above

Note: This work is included in the online catalogue raisonné of the artist’s work compiled by Glenn C. Peck.

An associate of the Ashcan school, Bellows is known for his urban realist style depicting subjects including street scenes, boxing matches, and the brutality of war.

With brilliant brushstrokes and original compositions, George Bellows painted the coarseness and chaos of working-class life, the rugged beauty of coastal landscapes, and tender family portraits. He also created illustrations that satirized the upper classes and was a pioneer

An associate of the Ashcan school, Bellows is known for his urban realist style depicting subjects including street scenes, boxing matches, and the brutality of war.

With brilliant brushstrokes and original compositions, George Bellows painted the coarseness and chaos of working-class life, the rugged beauty of coastal landscapes, and tender family portraits. He also created illustrations that satirized the upper classes and was a pioneer in establishing lithography as a fine art medium. Over the course of his short career, which lasted barely two decades, Bellows cannily walked a tightrope between gaining conservative art institutions’ respect and innovation with the best of the artistic vanguard. He continually won the highest prizes at juried shows while simultaneously belonging to a progressive group of painters who sought to define themselves as “independent” from the establishment.

George Wesley Bellows was born in Columbus, Ohio on August 19, 1882. He attended Ohio State University from 1901 until 1904 where he excelled at athletics and took all available art classes. Bellows played on the school’s basketball and baseball teams and was a leading illustrator for the school yearbook, Makio. In the fall of 1904 Bellows left Ohio State University, a year before graduation, and moved to New York City to study art.

In New York Bellows became a student of Robert Henri, William Merritt Chase, Kenneth Hayes Miller, and John Sloan at the New York School of Art (now Parsons The New School for Design). It was Henri who had the greatest influence on Bellows’ career, teaching him to observe and paint life on the streets of New York City. Their teacher and pupil relationship developed into a father-son bond that would last for the rest of Bellows’ life.

In the third year of his studies Bellows painted River Rats (1906, Private collection) depicting a rocky cliff descending sharply from the grimy city streets to the East River below. This work was accepted by the jury for the National Academy of Design’s eighty-second annual exhibition. The same year Bellows exhibited Kids (1906, Private collection) at the Society of American Artists. After this success, Bellows left the New York School of Art and took a studio of his own in the Lincoln Arcade Building at 1947 Broadway.

While studying at the New York School of Art Bellows became closely aligned, both personally and stylistically, with members of what was subsequently called the Ashcan School. This group was primarily comprised of artists known as “The Eight”––Arthur B. Davies, William Glackens, Henri, Ernest Lawson, George Luks, Maurice Prendergast, Everett Shinn, and John Sloan––who exhibited their work in the famous artist-organized Macbeth Gallery exhibition of February 1908. This exhibition was organized as a protest to perceived National Academy judging biases. Bellows did not exhibit any works in the Macbeth show as he was in Ohio at the time recuperating from a bad cold; however, he did exhibit a painting, Pennsylvania Excavation (1907, Private collection), and a boxing drawing, The Knock Out (1906, Private collection), in a similar independent exhibition with Henri’s circle in a loft on West Forty-second Street a month later. The New York Evening Mail dubbed this exhibition “‘The Eight’ Out-Eighted.” These “independent” exhibitions were hailed as a success after the National Academy became more opened-minded by selecting works by members of Henri’s circle. Through this association with the Ashcan School, Bellows’ artistic identity was brought to the fore; over the following years he continued to exhibit his works in nationally recognized juried exhibitions and “independent” shows.

From 1907 through 1915 Bellows executed multiple series depicting subjects such as the excavation of Pennsylvania Station, New York City under snowfall, and landscapes along the Hudson River; however, Bellows’ signature series from this period are his boxing paintings. The most well-known of these works are Club Night (1907, National Gallery of Art), Stag at Sharkey’s (1909, Cleveland Museum of Art), and Both Members of this Club (1909, National Gallery of Art). These boxing paintings emerged from Bellows’ experience visiting private boxing matches in the back room of Tom Sharkey’s saloon at a time when boxing was illegal in New York. They depict fierce amateur boxing battles using roughly lain brushstrokes to document the raw motion and feeling of the fights. Bellows exhibited Stag at Sharkey’s and Both Members of this Club in another important Ashcan exhibition held in 1910, “Exhibition of Independent Artists,” which was also organized by Henri.

In 1908 Bellows married his longtime girlfriend Emma Story. With a new wife to support, Bellows began working as an instructor at the Art Students League. He realized he was not fond of teaching and, following continued professional achievements, quickly returned to painting fulltime. (Bellows did return to teaching later in life, working as an instructor at the Artists Colony in Carmel, California; the School of the Art Institute of Chicago; and the Arts Student League in Woodstock.) Bellows and Emma had their first daughter, Anne, in 1911 and their second daughter, Jean, in 1915.

In 1911 Bellows became a founding member of the Association of American Painters and Sculptors and was involved in organizing the seminal Armory Show. Held in 1913, this exhibition introduced many new, abstract painting styles to American audiences. Bellows, who never traveled overseas, was intrigued by Cubism and found the work of Pierre-Auguste Renoir particularly exciting. While Bellows’ welcomed this fresh modern art, his own work (he exhibited five paintings and some drawings in the show) still demonstrated a respect for traditions of realism that were highly regarded by conservative American art institutions. As the Armory Show closed, the National Academy opened its eighty-eighth annual exhibition in which Bellows’ Little Girl in White (1912) won the annual Hallgarten prize. Shortly afterwards Bellows was elevated to the status of Academician by the Academy.

While Bellows’ received increasing institutional recognition and acceptance, he remained progressive in his political views and contributed his skills and time to various causes. Between 1913 and 1918 he submitted illustrations to accompany stories in the socialist publication The Masses, as well as the American Magazine, Century, Harper’s, and Hearst’s International Magazine. Bellows also marched in demonstrations for women’s rights and, during World War One, created images that illustrated the carnage of war.

As Bellows continued to publish his drawings he began to experiment with the printing process. In 1916 he installed a lithography press in his studio and hired George C. Miller to assist him with running the press and organizing the printing inks and chemicals. Bellows worked with Miller for two years producing memorable prints such as Benediction in Georgia (1916) and Dance in the Madhouse (1917). In 1917 Bellows became a founding member, along with twenty-seven other artists, of the Painter-Gravers of America, which sought to hold exhibitions of prints to educate the public about printmaking processes and support the use of the medium for the fine arts in America.

Miller joined the Navy in 1918 and, without a printing assistant, Bellows stopped producing lithographs until teaming up with lithographer Bolton Brown in 1921. Bellows and Brown collaborated over the next four years to produce more than one hundred images, with subjects ranging from social satire, portraits of friends and family, scenes from Bellows’ youth, and new versions of early paintings.

Bellows continued to paint his earlier themes while establishing his identity as a printer. In the last decade of his life he also began to receive portrait commissions from New York’s wealthy elite and took summer painting trips to Monhegan Island (1911, 1913, 1914), Ogunquit (1915), and Camden, Maine (1916). He spent every summer between 1920 and 1924 in Woodstock, New York where he built a house for his family and taught at the Art Students League Woodstock campus. In Woodstock Bellows painted many tranquil landscapes and intimate portraits of friends and family.

Bellows’ appendix ruptured on January 2, 1925 following months of erratic stomach pains. He was rushed to the hospital where it was safely removed; however, peritonitis had already poisoned his system. Bellows’ died on January 8, 1925 at age forty-two. In October of that year the Metropolitan Museum of Art honored him with a memorial exhibition.

Bellows’ contribution to art history can be summarized by artistic achievements that were always distinctly American. As a reviewer of his memorial show noted, “If it is important to have American art, Bellows is the most gifted figure our painting has produced. If the importance is to have art, without nationality, he ranks with half a dozen other of the first flight.”1 Whether Bellows’ subjects were the slums of the Lower East Side, the savagery of a backroom boxing match, or a bucolic landscape, his unconscious “nationality” allowed him a frank appreciation for an authentic vision of America.

1882 Born August 12 in Columbus, Ohio
1901–04 Attends Ohio State University where he plays on the baseball team and creates illustrations for the yearbook
1904 Leaves Ohio State University and moves to New York
Studies at William Merritt Chase’s New York School of Art under Robert Henri
1906 Rents a studio in the Lincoln Arcade Building on Broadway
1908 Wins first award for painting at the National Academy of Design
Exhibits with Henri’s circle in the “Exhibition of Paintings and Drawings by Contemporary Americans” at West Forty-second Street
Teaches at the University of Virginia for six weeks over summer
1909 Takes a five-week winter vacation with Ed Keefe and Eugene O’Neill to the Sourland Hills in western New Jersey
Sells first work to a museum: North River (1908) to the Pennsylvania Academy of the Fine Arts
Elected an Associate of the National Academy of Design (at age twenty-six, he is one of the youngest artists to receive this honor)
1910 Helps organize and exhibits paintings in the “Exhibition of Independent Artists”
Begins teaching at the Art Students League
Buys home at 146 East 19th Street
Marries Emma Louise Story
1911 Organizes exhibition of the “Independent Artists” in Columbus, Ohio
Has first solo exhibition, showing twenty-four paintings, at Madison Gallery, New York
Spends summer on Monhegan Island, Maine with Henri and Randall Davey
Daughter, Anne, is born
Up the Hudson (1908) enters the collection of the Metropolitan Museum of Art
1913 As a member of the Association of American Painters and Sculptors, helps organize the Armory Show and exhibits works in it
Wins Hallgarten prize at the eighty-eighth annual exhibition at the National Academy of Design
Elected Academician of the National Academy of Design
Spends summer on Monhegan Island, Maine
Submits illustrations to the magazine The Masses
1914 Spends summer on Monhegan Island, Maine
1915 Daughter, Jean, is born
Spends summer at Ogunquit, Maine
1916 Begins making lithographs with printer George C. Miller (until 1918)
Spends summer in Camden, Maine
1917 Spends summer working as an instructor at the Artists Colony in Carmel, California
Visits Mexico in the fall
1918 Helps form the New Society of American Artists
Spends summer in Middletown, Rhode Island
1919 Teaches at the School of the Art Institute of Chicago
1920 Spends summer in Woodstock, New York (also in 1921, 1922, 1923, 1924)
1922 Takes solo painting trip through the Catskills in New York
1921 Begins working with printer Bolton Brown on new series of lithographs
1923 Wins the Logan Purchase Prize at the Art Institute of Chicago
1925 Dies January 8 in New York following an emergency appendectomy
Memorial Exhibition held at the Metropolitan Museum of Art