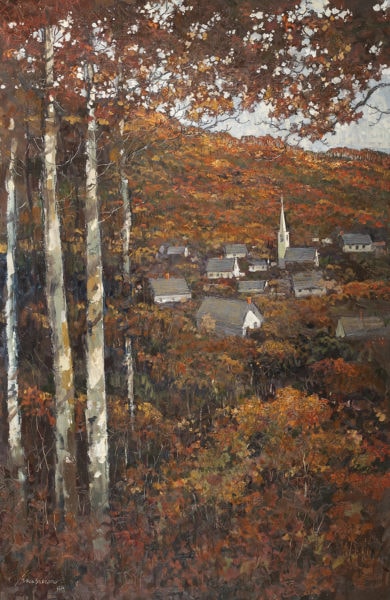 I think in some ways I’m a failure because people think I’m a painter of barns and a writer of nostalgia… It’s not what I’ve been trying to do. I hate nostalgia. It’s a dreaded disease. [1]
—Eric Sloane

To view a painting by Eric Sloane of a quintessential New England covered bridge, with its weathered clapboard siding, worn dirt road, and Huck Finn–inspired children fishing in the brook below, one is touched by the familiarity of the scene. But what seems at first glance to be a simple version of Yankee Americana reveals deeper meaning when understood in the

I think in some ways I’m a failure because people think I’m a painter of barns and a writer of nostalgia… It’s not what I’ve been trying to do. I hate nostalgia. It’s a dreaded disease. [1]
—Eric Sloane

To view a painting by Eric Sloane of a quintessential New England covered bridge, with its weathered clapboard siding, worn dirt road, and Huck Finn–inspired children fishing in the brook below, one is touched by the familiarity of the scene. But what seems at first glance to be a simple version of Yankee Americana reveals deeper meaning when understood in the context of the artist’s long career. With no less than forty books published during his lifetime, Sloane provided a window into his philosophies on arts, crafts, and American life, expressed through his pictures of our national landscape. To hear the artist describe his life and work in his own words is to understand the complexity of his ambition, which led to his extraordinary accomplishments not only as a painter, but also as a writer, meteorologist, historian, and craftsman.

Born Everard Jean Hinrichs in in New York City 1905, Eric Sloane adopted his professional name to reflect his reverence for both America and his mentor at the Art Students League, Ashcan master John Sloan. Sloane began his artistic career as a traveling sign painter. His 1925 journey in the Ford Model-T that he “borrowed” from his family proved instrumental to his development. Time spent in Lancaster, Pennsylvania, working for Amish craftsmen, garnered Sloane’s deep appreciation for agrarian life, which he studied for later publications such as American Yesterday (1956), Diary of an Early American Boy: Noah Blake, 1805 (1962), and Eric Sloane’s Do: A Little Book of Early American Know-How (1972). Reaching Taos, New Mexico, later in the trip, the vast horizons and panoramas of the Southwest sparked an intense interest in meteorology. He began painting “cloudscapes,” for which he became so well known that in 1976 he was commissioned by the Smithsonian National Air and Space Museum to paint a mural in the Boeing Milestones of Flight Hall. His early literary career included manuals for the US Air Force describing weather patterns, and he became so enthralled with the subject that he enrolled in the Massachusetts Institute of Technology to understand the science of weather more thoroughly—his distaste for math, however, prevented him from completing his coursework. He also felt that the MIT program had a “lack of romance,” to which a professor responded, “If it is romance in the weather you’re searching for, you would do better to study the almanacs and farm diaries of the Early American.”[2] In 1939, he briefly took a position as broadcast weatherman for the Dumont television station in New York City. “Going downtown to the Weather Bureau to study government weather maps in the morning, back to the television’s station at noon to prepare the show, and then being made up (they all used heavy makeup in those days), took up the whole day and my seven o’clock show left me exhausted after the ‘three-minute’ effort…. Painting was easier.”[3]

Another important moment from Sloane’s foundational cross country drive was his first exposure to flight. In Ohio, he traded a pilot a painting for a flight, and the experience excited his mounting fascination with the sky. When Sloane returned to New York, he took up residence in Coney Island, painting signs and murals for the park and surrounding restaurants and inns. His new proximity to Floyd Bennett Field and Roosevelt Field fueled his interest in aviation, and he offered his services to local pilots painting license numbers and decorative designs on planes. His dual interests in art and air were encouraged by relationships formed during this time: Amelia Earhart purchased Sloane’s first “cloudscape,” and he met Reginald Marsh and other modernists painting the chaos of Coney Island.

Sloane’s passion for early American craftsmanship led to an impressive collection of historic tools, now housed in the Eric Sloane Museum and Kent Furnace in Connecticut. Beginning about 1953, Sloane split his time between Santa Fe and Connecticut, and New England vernacular architecture became a new focus. Painting from memory rather than on site, he considered his popular barn and covered bridge paintings “portraits of a spirit, not pictures of buildings” and believed that “real art depends so little on the subject, so much on the mood.” He explained that his choice of subject, however, was not a means for “nostalgia,” a label he despised, but rather a method of expression:
I have always regarded art as some sort of remembering, contending that painting or writing is primarily communication of the author’s remembrance, so I have really been in the business of reflection…. I regard nostalgia as a kind of disease and I cringe when my paintings are referred to as nostalgic instead of poems of awareness, monuments to meaningful antiquity.[4]

Throughout his lifetime, Eric Sloane was acknowledged for his many and varied talents. He published at least forty books with illustrations, was a member of the prestigious National Academy of Design and Salmagundi Club, and elected a Benjamin Franklin Fellow of the Royal Society of Arts in London. He exhibited in New York, Moscow, Boston, Denver, Santa Fe, and Tulsa. His paintings are in many important museum collections today, including the Addison Gallery of American Art, New Britain Museum of American Art, Shelburne Museum, and Tacoma Art Museum. Sloane died unexpectedly of a heart attack immediately before the 1985 opening of his New York retrospective, Eric Sloane, N.A., Eighty, An American Souvenir: In Celebration of Eric Sloane’s 80th Birthday. In his final reflection on his life, written for the occasion of the exhibition, he described his ultimate purpose in art, which he had carried through every phase of his work,
We forget much more than we remember, yet the human brain is a computerlike clutter of data, forever waiting to be tapped. A song, a painting, a written sentence, even some sound, or a faint odor can trigger the memory to revive long-lost emotions, fresh as when they were first experienced. In fact, the passing of time often intensifies, making the picture more brilliant. That is why I seldom paint on location, recreating from memory instead.[5]

CHRONOLOGY
1905 Born February 27 in New York City as Everard Jean Hinrichs to a successful business owner
1919 The Hinrichs family moves from Harlem, Manhattan, to Forest Hills, Queens; young Everard is inspired by neighbors Herman Roundtree, an illustrator for Field and Stream magazine, and Fred Goudy, a master printer and font designer
1922 Briefly studies at the Art Students League where he meets Ashcan masters John Sloan and George Luks; his mother dies in November
1923–24 Studies at the New York School of Fine and Applied Art, but is frequently absent
1924 Enrolls in Yale University’s School of Fine Art, but leaves before completion of his first semester: “At Yale, Eric had fun. He didn’t think much of art teachers, though.”[6]
1925 Leaves New York to work as a traveling sign painter; receives free samples of the new manufacturing material Masonite, which becomes his preferred medium for its economy, rigidity, and ability to easily cut to size; arrives in Taos, New Mexico, for the first time
ca. 1925 Begins using the name Eric Sloane, derived from “America” and his mentor at the Art Students League, John Sloan
1926 Marries first wife, Fredginia Le Rouge
1929 His father dies and Sloane inherits the family home in Forest Hills
1931 Sloane sells the Forest Hills home to pay off his mounting debts, and returns to Taos where he lives in the guesthouse of Russian artist Leon Gaspard and associates with members of Taos Society of Artists; “The genius that rubbed off from such contacts has been more valuable to me than anything I’ve ever learned in school.”[7]
1933 Returns to New York City and paints signs and murals at Coney Island; invited to be artist-in-residence at Half Moon Hotel, meets aviators who fly out of nearby Floyd Bennett Field and Roosevelt Field, including Wiley Post, Roscoe Turner, and Bill Odom; uses his experience in sign painting to work at air fields changing license numbers on plane rudders and adding personal emblems to fuselages; friendship with Wiley Post allows Sloane to experience flight and his scientific interest in clouds and weather begins
ca. 1934 Marries second wife, Barbara “Bobbie” Lawrence
1939 Hired as weatherman in New York City
1941 Publishes Clouds, Wind, and Air: “It was in Taos, New Mexico, some forty books ago, that the idea of writing while wending my way back east by automobile seemed credible. Inspired by the eight-thousand-foot view of sky, I had decided to make meteorology and sky painting a life’s work and, after all, the best way for me to learn a subject has always been to write a book about it. That was how my first book, Clouds, Air and Wind evolved.”[8]
1943 Serves as special consultant to Museum of Modern Art exhibition “Airways to Peace: An Exhibition of Geography for the Future,” designed by Herbert Bayer
1944–45 Builds three-dimensional weather model for the American Museum of Natural History, project earns a gold medal from the National Academy of Design and leads to models commissioned by the US Navy for instructional purposes, and a traveling lecture series
1948–50 Serves as editor of Weatherwise, The Magazine About Weather
ca. 1953 Marries third wife, Gina Bertanzal; purchases farm in Brookfield, Connecticut, and develops interest in early American life due to pioneers’ great respect and knowledge of weather patterns
ca. 1955 Marries fourth wife, Lynn Terry, and moves to Washington, Connecticut
1957 Marries fifth wife, Ruth Rohland
1958 Sells Connecticut home to return to Taos with Ruth, later in the year purchases “Weather Hill Farm” in Warren, Connecticut, where he maintains a home for the rest of his life
1962 Elected an artist member of the Salmagundi Club
1965 Marries sixth wife, Miriam Francis Alicia Carman, known as “Mimi”
1967 Elected associate member of the National Academy of Design
1968 Elected full academician of the National Academy of Design
1969 Donates collection of early American tools to Sloane-Stanley Museum in Kent, Connecticut
1972 Elected Benjamin Franklin Fellow of the Royal Society of Arts, London
1974 Builds a one-room log cabin next to the Sloane-Stanley Museum using only old tools and local materials
1975 Builds a home in Santa Fe, New Mexico, which he calls “Casa de Las Nubes” (House of the Clouds)
1976 Paints the 58½ by 75 foot mural Earth Flight Environment at Smithsonian National Air and Space Museum, which is still on display in Boeing Milestones of Flight Hall (his mural for the “Golden Age of Flight” exhibition is now hidden behind the main wall in gallery 105)
1985 Dies of a heart attack on March 5th outside of the Plaza Hotel