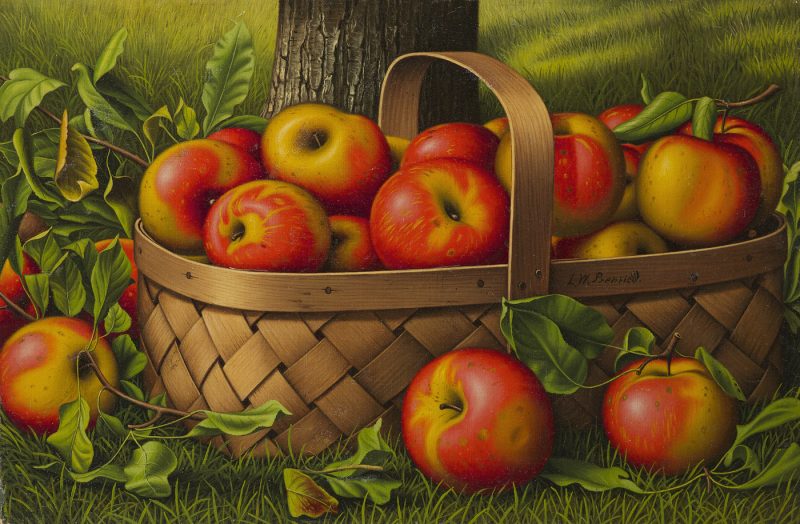 Apples in a Basket

Apples in a Basket

Note: In the Adirondack Museum’s 1993 exhibition catalogue, curator Barbara Jones describes Prentice’s affinity for apples as a still life subject: “Prentice’s favorite still life subject was the apple. He depicted both interior and exterior views of that particular fruit in myriad ways: in a tin pail, in metal or silver bowls, in a paper page; in and spilling out of bushel baskets, quart containers, or woven baskets.”

Levi Wells Prentice was born on December 18, 1851 in Harrisburg, New York, and was raised on a farm in nearby Lewis County. By the 1870s, the Prentice family was living in Syracuse, where the artist began painting the Adirondack Mountains. Later, at the age of twenty-three, Prentice formally declared himself a landscape painter.(1)

Levi Wells Prentice was born on December 18, 1851 in Harrisburg, New York, and was raised on a farm in nearby Lewis County. By the 1870s, the Prentice family was living in Syracuse, where the artist began painting the Adirondack Mountains. Later, at the age of twenty-three, Prentice formally declared himself a landscape painter.(1) He was essentially a self-taught artist; in 1873, a reporter from the Syracuse Journal wrote, “Mr. Prentice has thus far been his own master. Whatever of development his rare genius has received has come through his own efforts.”(2)

Prentice’s early approach was influenced by the methods and ideas of Hudson River School painters, including Asher B. Durand, Thomas Cole, Frederic E. Church, and Albert Bierstadt. Like these great artists, Prentice often used rough sketches and photography to preserve images of the landscape he planned to portray, which he referred to while painting the final piece in his studio. Despite the fact that Prentice made only four visits to the North Woods between the years of 1873 and 1877, he produced more than seventy meticulously detailed scenes of the lakes, mountains, and woods throughout the area and became well-known as a talented Adirondack artist. His paintings are infused with a quiet sublimity and magnificence that echoes an appreciation for the raw beauty of the natural, rugged terrain that was shared by leading Hudson River School artists. His landscapes often incorporate several characteristic elements, including remnants of tree trunks, stylized rocks, local flora and fauna rendered with extreme detail, and birch trees with brittle and unfurling bark.(3)

During the late 1870s, Prentice supplemented his income by taking on additional projects. Although his landscapes were bringing him recognition, he also painted portraits, decorated residential ceilings, and designed furniture and houses.(4) Around 1883, Prentice and his wife moved to Brooklyn, where his work underwent an important stylistic transformation; he shifted away from scenes of the American landscape and became almost entirely focused on still lifes. His arrival to Brooklyn was well-timed with the city’s renewed interest in still-life painting. American art scholar William H. Gerdts notes the resurgence of the genre’s popularity, writing, “One of the most distinctive aspects of Brooklyn painting in the late nineteenth century was the predominance of still lifes. This was no doubt due to the easy life that Brooklyn offered to the sedentary painter, who could work within the comfort of his own home and studio, often one and the same.”(5)

Prentice’s still lifes typically fall within one of four categories: simple table-top arrangements of fruit set in an undefined interior, elaborate tabletop arrangements in an identifiable interior, scenes of fruit tumbling out of a basket onto the grass, and living fruit growing outdoors in its natural setting.(6) All of his still lifes utilize the trompe l’oeil effect, a technique that he may have seen in still lifes by William Harnett. Prentice’s favorite still-life subject was the apple. He produced more than forty scenes of the fruit in a myriad of ways: in bowls, in woven baskets, in metal pails, piled under a tree, and next to a ladder or a fence. In these apple paintings, as well as his others, there is one common element that the artist employed—“rustic unpretentiousness.”(7) Gerdts notes Prentice’s loyalty to an honest representation of his subjects: “His fruit is brilliantly colored but often pitted with spots or holes.”(8)

In addition to his career as a painter, Prentice worked as a teacher and also crafted and gilded his own frames. He passed away on November 28, 1935, and his obituary in the Philadelphia Journal of Commerce remembered him as “a landscape painter and interpreter of the best in American natural scenery. . . He was known and honored wherever art is worshipped for his unusual talent in depicting the Adirondacks particularly.”(9) There was a resurgence of interest in Prentice’s artwork during the 1970s, and again in the 1990s, when The Adirondack Museum hosted a commemorative retrospective of his work. Examples by the artist are included in the permanent collections of the Carnegie Museum of Art, Detroit Institute of Arts, Hudson River Museum, Montclair Art Museum, Shelburne Museum, and Museum of Fine Arts, Boston.