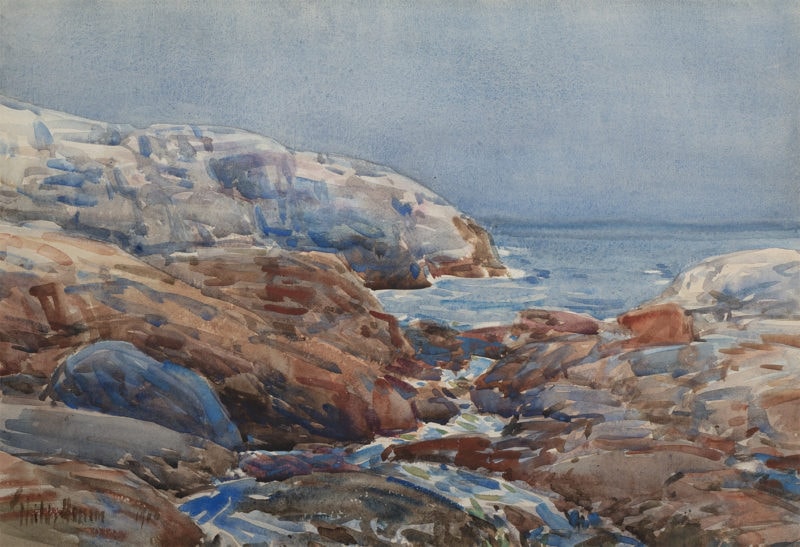 Childe Hassam, often referred to as the “American Monet,” is one of the most admired American Impressionists, famous for his New York City street scenes, coastal views, and rural landscapes of New England.

Childe Hassam, often referred to as the “American Monet,” is one of the most admired American Impressionists, famous for his New York City street scenes, coastal views, and rural landscapes of New England.

Frederick Childe Hassam, America’s leading Impressionist, established an impressive oeuvre with many mediums including watercolors, pastels, drawings and prints. Early in his career, Hassam established a connection with Claude Monet, but this association would become a frustration to him as he disdained comparisons to the great Frenchman, even rejected the label of Impressionist for himself. He is also known for two other styles: he became an important illustrator during the “golden age” of American illustration in the 1880s and 1890s, and he adopted many of the techniques of nineteenth-century British landscape painting, a result, in part, of his travels to England in the 1880s.

Hassam’s oils, watercolors and pastels display an intuitive sense of light and color. His works reflect knowledge of both French and English art theory, evident in his enlightened coastal and rural landscapes of New England. Hassam adopted a modern position by choosing cities as his primary subject, though today, he is also revered for the landscapes he painted during summer vacations on Appledore Island, Maine.

Hassam was born on Oct. 17, 1859, in Dorchester, Mass., to middle class parents Rosa Delia Hathorne and Frederick Fitch Hassam. From early in his life, Hassam preferred to be known by his middle name, and he signed his works “F. Childe Hassam.” Young Hassam was educated at Dorchester’s Meeting House Hill School and Dorchester High School, where he studied French, German, Latin and Greek while playing several sports. After an 1872 fire destroyed Hassam’s father’s cutlery business, he quit high school so he could work to help the family. In 1876, he started a job in the accounting department of Boston publishing house Little, Brown and Company, but he soon realized that numbers were not his strength and decided to devote his life to art.

Hassam’s art career began with training as a wood engraver and draftsman. Simultaneously, he worked as a free-lance illustrator, namely of stories for children. He also attended art classes at the Lowell Institute and the Boston Art Club during this time. Though he worked in oils and watercolor; he quickly developed a preference for the latter.

In 1883, Hassam made his first trip to Europe, visiting Great Britain, France; The Netherlands; Switzerland; Italy and Spain. While on the continent, he absorbed the painterly brushstrokes and pure colors of the Impressionists. In Paris, under their influence, his palette brightened and he discovered a love for depicting city subjects that he retained into the final years of his long and prolific career.

In 1884, Hassam married Kathleen Maude Doan, who was known as Maud. (The marriage was childless.) In the early 1880s, the couple lived in Boston, where the artist became one of a small number of American artists to paint watercolors of urban street scenes. In 1886, looking to further develop his art and style, he took Maud to Paris. They lived there for three years while Hassam attended classes at the Académie Julian. Paris, with its charm and elegance, the true “City of Light,” was captured in such Hassam paintings as Tuileries Gardens (1897) Pont Royal, Paris (1897) and Une Averse, Rue Bonaparte (1887).

After returning from Paris in 1889, the couple moved to New York City, where they would live for the next three decades. Soon after his arrival, Hassam helped to found the New York Watercolor Club and was elected its first president. From 1890 to 1894, he focused on flower painting. It was also during this period that he completed what are probably his best known illustrations – pictures for An Island Garden by his friend Celia Thaxter, a New England poet. In the late-19th and early-20th century, he painted images from Maine’s Appledore Island, finding that “the rocks and the sea are the few things that do not change and they are wonderfully beautiful.” 1 From 1916 to 1919, he created his famous images of flags of the United States and its allies that at least one scholar has characterized as Hassam’s contribution to the war effort. He received what he considered to be the greatest honor of his career in 1920 when he was elected to the Academy of Arts and Letters, an organization to which he left several hundred artworks after his death in 1935.

As his career developed, Hassam became progressively more insistent on English dominance in art. Though he had made a reputation as an Impressionist, he never considered himself to be an Impressionist and, in fact, claimed that he had learned little from French styles. His approach, he said, was built upon English watercolor traditions.

A painter of light and beauty, Hassam is one of the premier and most prolific American artists. He produced “thirty or forty paintings in the time that other artists labored to complete six or seven, so he had always a supply of fresh works for the many exhibits around the country and abroad, even when his canvases sold briskly to collectors.”2 His Impressionism depended on something more than painterly pursuit of pleasure or taste for light and color. He has been called “an American Sisley,” and “an American Monet” for his bright tones, dynamic brushwork and light-filled city subjects. The art of Hassam has a distinct aesthetic and cultural aspect, visible in its union of visual reality and American freedom.